Many scientists agree that one of the consequences of climate change will be an increase in the number and severity of forest fires and that this increase will be related to changes in rainfall amounts and increased temperatures.

In humid tropical areas during the 1990's, major fires occurred in the Brazilian Amazon, in Mexico and in Indonesia.  These fires were particularly severe during El Niño episodes and were associated with significant droughts in these countries.

So what are the main factors required for fire?

In a world affected by climate change, computer models predict an increase in extreme weather events and larger differences between dry and wet seasons.  It is likely that more plants will grow during the wet season as water levels increase and that rates of evaporation will become higher during the dry seasons.  These high rates of water loss will dry out the increased amounts of plant material, generating large amounts of flammable material.

These conditions already occur in some areas of the world.  For example, the Mediterranean has rainy winters while the summers are very hot and dry.

The maps below show that the summer of 2003 had just half the normal amount of rainfall and higher than average temperatures.  Forests became very dry and fires covered huge areas of Spain and Portugal (here around 325000 hectares burnt, an area larger than the whole of Luxemburg!). 2. Changes in temperature and precipitation in Europe during the summer of 2003.
Source. NOAA.

Predictions are that climate change will increase the risk of forest fires.  However most forest fires (around 95%) are started by human activity, some intentionally.  All fires cause a reduction in the ecological diversity of the land.

Fires are part of the natural seasonal cycle of forest growth, but the IPCC has listed a number of places where fire activity has significantly increased over the last decade, exceeding the expected number of natural fires.

Fire frequency is expected to increase with human-induced climate change, especially in places where rainfall is reduced or remains the same. The use of models has also suggested the increase in risk, frequency and severity of fires in Europe.

The most direct consequence of this change in fire pattern will be the changes in structure and composition of forests, changes in land use patterns and increased emissions to the atmosphere.  Have a look in the Lower Atmosphere Unit for more about emissions to the air from biomass burning. 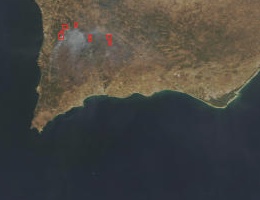 Find out more about fires and climate at:
Lower Atmosphere - Basics - Greenhouse, light and biosphere - fire