Fire has always been a part of the forest ecosystem but today there are more and more forest fires than ever before.

If fires are caused by natural factors, forests are able to recover and regrow.  The World Wide Fund for Nature (WWF), however, found that 95% of all vegetation fires today are caused by humans.

Each year there are more than 50,000 vegetation fires.  The WWF has called for preventive measures to avoid fire catastrophes in Southern Europe.

After the disastrous vegetation fires in Corsica and on the Côte d'Azur, the increasing dangers of fire in the Mediterranean area have become obvious.

Even now between 600,000 and 800,000 hectares of forest become victim to fires every year.  This is an area equivalent to the size of Crete. 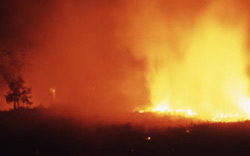 More than 50,000 fires destroy, on average, 1.5 % of the whole Mediterranean forest area per year. Biodiversity in the Mediterranean has, as a result, diminished.  The study by the WWF shows that 95% of fires are caused by humans, either by accident or deliberately.  The remaining 5% are caused by natural processes. In countries like Spain, Italy, Portugal and Greece, the number of vegetation fires has quadrupled since the 1960's.

Aside from human carelessness, other reasons include a change in land use and a massive expansion in the infrastructure needed for mass tourism.

Urbanisation has superseded traditional forestry in the Mediterranean area. Arson has become a popular way to convert the areas which were once used for forestry into profitable building land.  Longer lasting droughts, low humidity and extreme heat waves mean that fires are easy to start and they spread quickly.  As the number of vegetation fires increases, the natural rate at which the Mediterranean ecosystem regenerates has declined.

In many places a loss of biodiversity, scarceness of water, soil erosion and the formation of desert has been seen.  The danger of further vegetation fires rises as a result.  Approximately 300,000 square kilometres of European coastlines are endangered.

Simple reforestation is not a perfect solution to the problem.  So much dry wood accumulates in copses and secondary forests that they are also highly inflammable.  To try and reduce forest fires, strict laws and penalties must be enforced.  Many of the 50,000 fires each year can be prevented if governments start to spend money on preventative measures rather than simply paying to extinguish fires.  Better cooperation between all the institutions involved in fire prevention may prevent many fires (based on a WWF article – source: http://www.wwf.de/presse/pressearchiv/artikel/01349/index.html).

The FAO report however states, that "It has been observed, nevertheless, that the heavier the punishments provided by the law, the more difficult it is to prove arson and the more the courts hesitate to condemn arsonists". (http://www.fire.uni-freiburg.de/programmes/un/fao/Wp55_eng.pdf)

1. What reasons are there for vegetation fires and what are the consequences of forest fires?

2. Many forest fires are caused accidentally.  Design a danger sign which points out the danger of forest fires to visitors and shows the best ways to prevent them (cigarettes, fire…)!

Have a look at the world forest map below. Different type of forests are shown in different countries.

- Compare the numbers on the world map, find out which thumbnail (A, B, C, D) and which of the texts below (a, b, c, d) belongs to which number.

- Read the following texts, compare the areas burned and describe in a few lines what you think, how relevant Mediterranean fires are to the global climate and why you think this is!

The global view of fires

a) Every year in many African countries several million hectars burn.  Seven and a half million hectares of forest are traditionally burnt each year in Benin to produce agricultural land.  Sixty million hecares of savannah are burnt in Sudan each year.  Some of these fires are part of a natural cycle and the newly growing vegetation takes up carbon dioxide emitted by the fires.  Mnay of the fires are, however, the result of human activity and these fires cause long term damage to the environment.

b) In tropical Indonesia, fires are often related to the drought during El Niño events. Around five million hectares of forest were affected in Borneo during the 1982-1983 El Niño event, an area greater than the size of Switzerland. The situation during the 1997-1998 El Niño was even worse. About five million hectares of forest were burnt in the province of East Kalimantan alone and six and a half million hectares were lost in Borneo. All the fires of 1997-1998 were human-caused. The majority of the fires were due to land speculation and large-scale forest conversion as a result of inadequate and unenforced land use policies.

c) Russia contains more than 2500 million hectares of boreal forest.  This is equivalent to an area greater than a quarter of the size of Europe. Successful fire managment has dramatically reduced the area which burns each year.

d) The Brazilian rainforest has suffered from continuous deforestation by man for many decades.  Evergreen forest which does not naturally burn has been cleared by humans and converted, irreversibly, into agricultural land.  It is estimated that 35,000 km-2 of forest are lost each year and that by 1988, a total area of 400,000 km-2 had been cleared.  An area the size of France has already been lost and more and more forest is lost each year.  Huge amounts of carbon dioxide and other greenhouse gases are emitted into the air when the fires burn.