What is acid rain?

Water is essential for life on Earth. So when water is polluted the whole environment is affected.  Burning fossil fuels to produce energy generates air pollutants.  These air pollutants react with water in the air and make the water acid.  Acidity is measured using the pH scale.

The scientific term for water falling from the air to the ground is precipitation and this includes rain, drizzle, snow and hail.  Precipitation enters the rivers, permeates into the soil or evaporates and returns to the air as water vapour.  An important measure of the water quality is the pH scale. 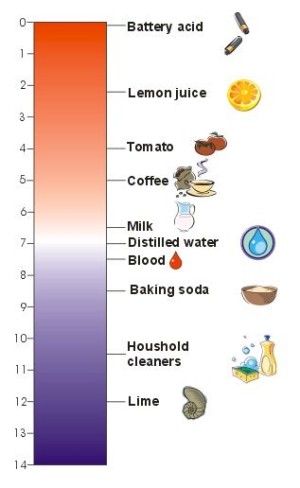 1. The pH scale. Typical pH values of foods and solutions we use in our houses.  The lower the value, the higher the acidity. Author: Sebastian Wypych.

In nature, many chemical compounds dissolve in water to form solutions which have a particular pH.  The more acidic the solution, the lower pH.

pH is the negative logarithm of the hydrogen ion activity in moles per liter (mol L-1).

This scale was invented by a Danish scientist, Soren Sorenson, in 1909. The pH scale ranges from 0 to 14, with a value of 7 considered neutral.  Values greater than 7 are alkaline and below 7 are acidic.

So:
- vinegar has a pH of 2.5 to 3 and is therefore acidic.
- pure distilled water has a pH of 7.0 and is neutral.
- a concentrated solution of baking soda (NaHCO3) has a pH of 8.2.
- household cleaners containing ammonium hydroxide (NH4OH) are very alkaline with pH values of 12.

In pure water, the only source of H+ ions is the following reaction:

The <=> arrow indicated the reaction is reversible and the charged ions can recombine to form water.   The more hydrogen ions there are in a solution, the more acid the solution and the lower the pH.  In aqueous solutions, the hydrogen ion combines with water to form the hydronium ion (H3O+) which reacts in the same way as a hydrogen (H+) ion.

Clean rain is naturally slightly acidic.  This is because carbon dioxide (CO2) in the air disolves in the water to form a solution of carbonic acid (H2CO3).  Once formed, this carbonic acid dissociates (breaks down) into hydrogen ions (H+) and hydrogen carbonate (HCO3-).  The presence of these hydrogen ions (shown here as H3O+) makes the water acidic:

In an alkaline solution containing hydroxide ions (OH-), the hydrogen carbonate can lose another hydrogen ion and become carbonate (CO32-).  Many rocks and sediments, e.g. dolomite or limestone, are made up of carbonate minerals.

So clean rain is slightly acidic because of the dissociated carbonic acid and has a pH value of 5.6.  So when the pH of rainfall is below 5.6, the rain must contain other chemical compounds which make it more acidic.  Most scientists consider rain with a pH less than 5.0 as acid rain.  As well as rain, we see acid snow and acid fog so its more correct to think of acid precipitation.

The human contribution to acid rain comes from nitrogen and sulfur compounds.  Nitrogen oxides (NOx = NO + NO2) and sulphur dioxide (SO2) are emitted during fossil fuel combustion and then undergo reactions in the air to form the nitric acid (HNO3) and the sulphuric acid (H2SO4) found in acid rain.

The pH of an acid cloud may be as low as 2.6. The pH of acid rain in highly industrialised regions is usually around 4.0.  Fogs in Los Angeles often have a pH value of less than 3.0.

Although almost all acid rain is the result of human activity, in some areas of the world such as Northern Australia, emissions of organic compounds from plants can form acid rain with pH values of around 4.4.

Cause: Emissions of SO2 and NOx

What makes the rain acidic? Atmospheric acids are produced in the air mainly as a result of chemical reactions of the acid precusor gases (SO2 and NOx) with water. Most of the SO2 and NOx is emitted into the atmosphere during the combustion of fossil fuels in power stations. Road transport, shipping and aircraft are also significant sources of NOx.  Natural sources include volcanoes, lightning strikes and biological decay. Natural sources of SO2 are volcanoes, phytoplankton in the oceans (dimethyl sulphide and carbonyl sulphide), biological decay and forest fires.

Acid rain is, however, mainly the result of human caused emissions. Figure 2. shows the countries who are the largest SO2 and NO2 emittors.  In both cases USA, China, Russia and India emit the largest amounts, generally because they have large populations.  However, in the USA, emissions per person are also very large due to their abundant use of energy. 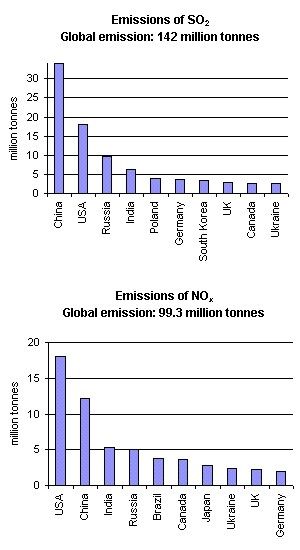 Considerable uncertainties are involved in compiling global emission inventories for SO2 and NOx. The natural emissions of SO2 are estimated to make up between 25 and 50% of total global emissions. However, in industrialised and urbanised regions, human sources are believed to represent as much as 90% of SO2 and NOx. The uncertainties vary strongly from one region to another. They are associated with a scarcity of data, particularly on agricultural management and fluxes from diffuse sources such as soils and aquatic systems. Figure 3.  shows the results of various studies.  Note that in Figures 3. and 4., the values refer to pure sulphur, whereas Figure 2. shows sulphur dioxide concentrations.

Humans have doubled the natural rate by which atmospheric nitrogen gas is converted (fixed) into more chemically reactive forms.  Atmospheric nitrogen deposition rates have increased between three and over ten times compared to pre-industrial times.  Emissions of sulphur into the atmosphere have more than doubled.

Problems associated with acid rain are growing rapidly in Asia today.  Sulphur dioxide emissions are expected to triple from 1990 levels by 2010 if current trends continue.  Minimising the already substantial acid rain damage in Asia and preventing heavier damage in the future will require investments in pollution control similar to those made in Europe and North America over the past 20 years.  For example, sulphur dioxide emissions in Europe were reduced by 44% in the period 1990 to 1998.  Emissions of nitrogen oxides fell by 21 per cent over the same period. The USA and Canada saw a 28% decline in SO2 emissions between 1980 and 1995.

High emissions of SO2 and NOx are concentrated in just a few areas of the world.Eastern Asia emits the greatest amounts of SO2 while the USA is the largest global NOx emitter.

Last modified: Wednesday, 27 February 2019, 2:36 PM
◄ Worksheet 3: Wind in the city
The impact of acid rain on the natural environment ►