The impact of air pollution (an overview)

Air pollution is potentially dangerous to our health, can damage the environment and is economically costly.  Meteorological conditions modify, to a large extent, the effects of air pollution.

As far as global climate change is concerned, the effects of air pollution on water and plant ecosystems are the most important as they affect how much CO2 is removed from the atmosphere. 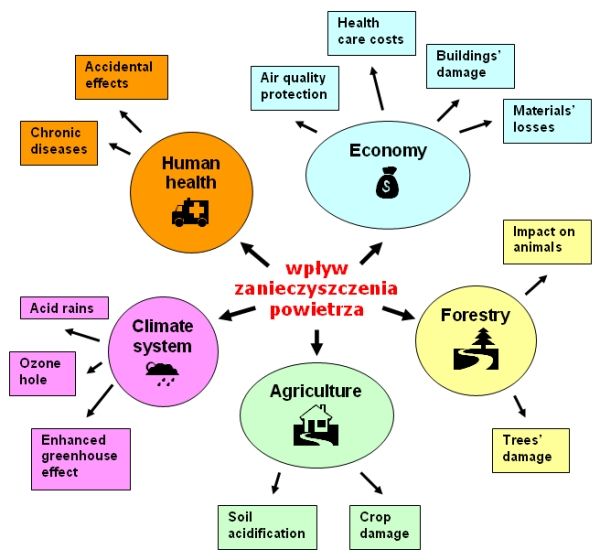 - the cost of air quality protection,
- the cost of preventing health problems,
- the loss of raw materials which become air pollution,
- losses caused by the increased corrosion of machines, buildings and damage to historical buildings and monuments.

On the other hand, stagnant air and temperature inversions can  cause problems when they occur close to emission sources as both prevent the dispersion of the pollution.  If an emission source (e.g. the top of a chimney) is below a temperature  inversion, the pollutants are trapped in the bottom layer of the atmosphere and their concentrations rise and may exceed allowed levels.  During an inversion, water vapour may start to condense out and form fog.  The water droplets react with the pollutants and smog can form.  As well as containing high, possibly dangerous, concentrations of various pollutants smog prevents a lot of sunlight reaching the ground.  The lower layers of the air and the ground may not be warmed up by the sun and the inversion continues.  Bad smog episodes are dangerous to our health and can even cause death in large cities.

An inversion is a layer of air close to the ground where it gets warmer rather than colder as you go upwards.  Inversions prevent vertical air movement and so stop pollution escaping up into the higher atmosphere. A good example of air pollution problems and how to solve them is Mexico City.  In 1997, there were three million motor vehicles in the city which used 17.3 million litres of petrol and 5 million litres of diesel every day.  These vehicles generated 75% of the pollution in the city.   Ozone was above acceptable levels on 300 days in 1999.  The worst period was between 1990 and 1992 when pollutants hit emergency levels on up to 177 days every year.  However, in 1999, emergency levels only occurred on 5 days.

This vast improvement in air quality is the result of anti-pollution efforts by the local government.  Now when pollution levels are high, the city authorities limit the number of cars which can enter the city.  This progress in improving air quality suggests that even huge developing cities across the world can begin to reduce pollution.