What can we do to counteract acid rain?

All of us can do something to limit the formation of acid rain or help reduce its effects. These actions vary from international agreements, through soil and water liming, to energy saving.

Efforts undertaken to counteract acid rain can be divided into two groups: 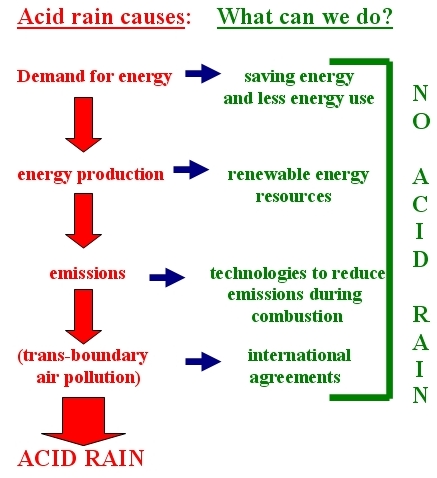 1. Causes of acid rain and what we can do to counteract them.
Author: Anita Bokwa.

The image on the left shows the chain of processes that cause acid rain to form. At each step there is something we can do to counteract it. The paragraphs below explain these activities.

Each of us can help!

Each of us can change our lifestyle and, as a result, reduce emissions of SO2 and NOx. First of all, energy saving leads to reductions in the use of fossil fuels and thus lower emissions.

Use of clean renewable energy resources also reduces SO2 and NOx emissions.

Many new technologies have been developed for industry which reduce the emissions of pollutants into the air.  These can be applied before, during or after combustion.

Examples of pre-combustion sulphur control technology (removing sulphur before burning) include coal scrubbing and oil desulphurisation. One of the post-combustion sulphur controls (removing sulphur after burning) is Flue Gas Desulfurisation (FGD). This process is, however, rather expensive.  The cost of removing one kilogram of sulphur is between three and six US dollars (between three and five Euros).  Figure 2. shows how a dry scrubbing system works. Unlike sulphur, it's impossible to reduce the nitrogen content of coal and oil before combustion.  The nitrogen is bound to the organic matter that makes up the fuel and so can't be removed by physical cleaning.  Instead, nitrogen oxides can be removed during combustion. Advanced low nitrogen oxides burners can reduce emissions by up to 30%. Such burners can be installed either on new or existing power plants. 4. A three-way catalytic converter. "Three-way" refers to the three gases it helps to reduce -- carbon monoxide, VOC's and NOx. The converter uses two different types of catalysts, a reduction catalyst and an oxidation catalyst. Both types consist of a ceramic (or metal) structure coated with a metal catalyst, usually platinum, rhodium and/or palladium. The idea is to create a structure that exposes the maximum surface area of catalyst to the exhaust stream, while also minimizing the amount of catalyst required (they are very expensive). There are two main types of structures used in catalytic converters -- honeycomb and ceramic beads. Most cars today use a honeycomb structure.  Explanations: A - reduction catalyst; B - oxidization catalyst; C - honeycomb.
Source: HowStuffWorks.

Concern in the late 1970's led to international efforts to identify the causes and effects of long-range (transboundary) transport of air pollutants.  During the 1980's much research was conducted in Europe and North America. International legislation during the 1980's and 1990's has led to huge reductions in SO2 emissions in many countries but reductions in NOx emissions have, unfortunately, been much less. 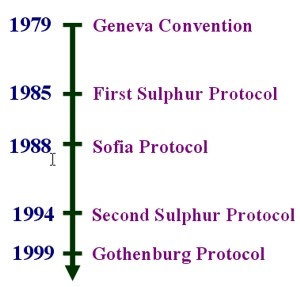 In 1979, the United Nations Economic Commission for Europe (UNECE) implemented the Convention on Long-Range Transboundary Pollution (the so-called Geneva Convention). In 1985, in Helsinki, most UNECE members adopted the Protocol on the Reduction of Sulphur Emissions, agreeing to reduce SO2 emissions by 30% (from 1980 levels) by 1993. This was called the 30% club. All of the countries that signed the Protocol achieved this reduction.  Many other countries have now also met these targets.

The Sofia Protocol for reducing NOx emissions was adopted in 1988. The protocol is based on 1987 levels.  Many countries are unlikely to meet these targets, due to increases in road traffic and despite European Union legislation requiring cars built after 1993 to be fitted with a catalytic converter.

The most recent UNECE Convention on Long Range Transboundary Air Pollution was signed by 27 countries in December 1999. The Gothenburg Protocol, designed to Abate Acidification, Eutrophication and Ground-level Ozone aims to cut emissions of four pollutants: SO2, NOx, VOC's and NH3, by setting country-by-country emission ceilings to be achieved by the year 2010. 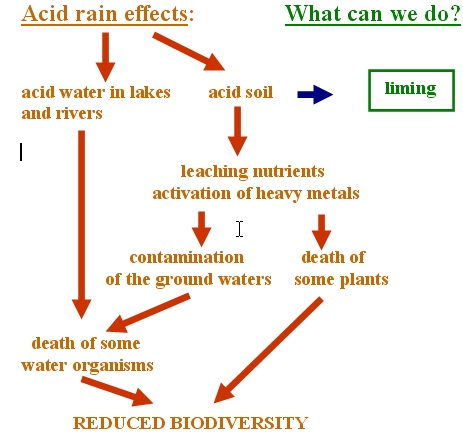 6. Effects of acid rain on natural environment and what we can do to counteract them.
Author: Anita Bokwa

Once acid rain forms, all we can do is neutralise its effects. Action has to be taken quickly to have any effect at all and the most commonly used method is liming. This is described below.

The acidity of a water body is greatly influenced by the amount of limestone in the surrounding rock formations. River beds and lake beds formed from limestone rocks are partially dissolved by the acidic water and this neutralises the acid. At present the main way of artificially reversing acidification in freshwaters is liming the water body or its surrounding catchment by adding sodium hydroxide (NaOH) or slaked lime (calcium hydroxide Ca(OH)2.  Liming increases the pH of the water, causing aluminum and other metals to come out of solution and fall to the bottom of the lake as metal rich sediments.  This improves the conditions for surface living organisms but causes toxicity problems for organisms living on the lake bed. Acidified lakes in Sweden, the USA and Canada have all been restored in the short term by liming. Liming on a large scale, however, is expensive.

Liming provides only a temporary solution, it's far better to attack the source of the problem by reducing emissions of the acidifying pollutants, sulphur dioxide and the nitrogen oxides.