A weather front is defined as the boundary between two airmasses of different temperatures and densities.   When two airmasses meet, the warmer air rises above the cooler denser air.  The transition region between the two airmasses is known as a front.

Weather fronts generally travel from west to east.  Their direction can, however, be affected by geographic features such as mountains and large bodies of water, particularly if they form in the lower levels of the atmosphere. 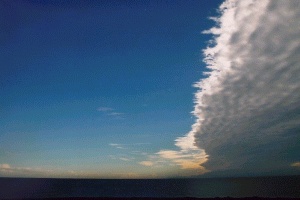 Fronts are always accompanied by clouds and, very often, also by rain.  When a weather front passes over an area, changes in wind speed and direction, atmospheric pressure and the moisture content of the air are also seen.

There are four types of fronts: cold fronts, warm fronts, occluded fronts and stationary fronts. The type of front depends both on the direction in which the airmass is moving and on the characteristics of the airmass.

As the warm air rises, it cools, the water vapour in the air condenses out and clouds start to form.  The warm air is forced to rise rapidly due to strong undercutting by the cold air.  This causes towering clouds to form and showers or thunderstorms.  Rain associated with cold fronts is usually heavy but short lived and only affects a small distance (about 50 to 70 km).    The air behind a cold front is noticeably colder and drier than the air ahead of it. When the cold front passes through, temperatures can drop more than 15 oC within the first hour.

3. A cold front is represented by a solid blue line with triangles along the front pointing towards the warmer air and in the direction of movement (temperature is given in Fahrenheit in the figure.)   Source: University of Illinois http://ww2010.atmos.uiuc.edu/(Gh)/home.rxml

Warm fronts occur when a warm airmass approaches a colder one. The warmer air lifts up and over the colder air.  Warm fronts generally move more slowly than cold fronts, gently settling over the cold air and moving it out of the way.  Rain associated with warm fronts is less heavy but more extensive (300 to 400 km) than rain generated at cold fronts.

The air behind a warm front is warmer and more moist than the air ahead of it. Warm fronts generate light rain or snow which can last from a few hours to several days. When a warm front passes through, the air becomes noticeably warmer and more humid than it was before.

The first signs of the warm front are the cirrus clouds, followed by the cirrostratus, altostratus, nimbostratus and stratocumulus types of clouds.  The cirrus clouds can be up to 1000 km away from the position of the front at the ground.  These clouds are all generally horizontal in structure because the front slopes gently into the air.  Clouds associated with cold fronts are mostly vertical in structure because the front is narrower and the air rises quickly.

6. A warm front is represented by a solid red line with semicircles pointing towards the colder air and in the direction of movement  (temperature is given in Fahrenheit on the figure.)

Occluded fronts occur when cold, warm and cool air come together. There are two main types, cold and warm occluded fronts.  The difference depends on the relative states of the cold airmasses behind and in front of the warm air.

Cold occluded fronts occur when
overtakes the warm front.  The cold front lifts the warm front up in to the air (both the warm air above and the cool air underneath) and it creeps underneath. At the beginning the weather is similar to that seen when a warm front passes, but it then changes into typical cold front weather and heavy rain falls.

Stationary fronts form at the boundary between warm and cold air when neither airmass gains area from the other.  They have similar characteristics to warm fronts but are less active.