Sources, sinks and physical conditions (hours of sunshine, temperature, rainfall, wind strength and direction) affect both the horizontal and vertical distributions of a gas.  Vertical profiles often show slightly decreasing mixing ratios with increasing altitude particularly in the free troposphere and the stratosphere.  Ozone is an exception to this and has its highest mixing ratios and concentrations in the ozone layer in the stratosphere.  Most of the chemistry in the atmosphere happens much lower in the atmosphere, in the planetary boundary layer.  This is the layer of the atmosphere which is directly affected by the surface of the Earth and is where the chemical compounds are emitted. 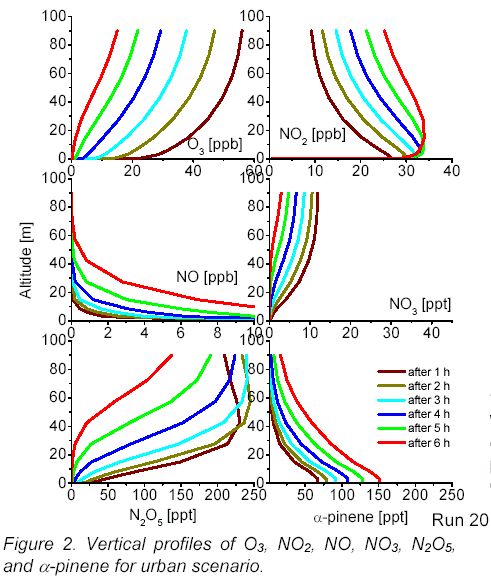 1. Mixing ratios of different compounds during the night close to the ground.  The ratios are not measured but are the result of a chemical model which allows us to look at how the mixing ratios change over time.  Authors: Andreas Geyer, Shuihui Wang and Jochen Stutz.

The graphs below show the vertical profiles for several organic and inorganic trace gases in the troposphere measured by a research aeroplane.  Apart from carbon dioxide, ozone and methane, the typical values for mixing ratios are a few hundred parts per trillion (ppt) or a few parts per billion (ppb). The compounds shown are the more important trace gases, there are hundreds of other organic gases in the troposphere which have mixing ratios of just a few ppt.

2. a-c) Vertical profiles of various organic gases and a few inorganic gases.  The values were measured from a research aeroplane over the Mediterranean sea during the MINOS field campaign in August 2001. The strong black lines show the median vertical profiles, the thinner black lines give the standard deviation. Grey squares show values from canister samples. Red dashed lines and red squares are from another flight and give you an idea of how the values vary within a few days. Data and figures from: J. Lelieveld and co-authors.

Gases in the troposphere

Overview of important gases in the free atmosphere:

*The concentrations of gases with a star have increased as a result of human activity and are relatively well mixed over the globe. The percent values of the main components of air are given for dry air. Data from 2005-2007.

Amounts of gases are often given in different units:

Mixing ratios are often more helpful for scientists. When air rises, it expands in volume and, as a result, the concentration of the gas changes.  The mixing ratio (relative proportion of the gas to the total number of air molecules), however, remains the same.

Conversion from one unit to the other depends on the pressure (= the altitude) and the molecular weight of the compound. If we do the calculation for the surface of the Earth at a normal pressure of about 1 bar we can express the total molecules per volume of air in the following way:

There is more about concentrations and mixing ratios at:
Upper atmosphere - Basics - Unit 1 - Composition