Energy from the Sun heats the entire Earth, but this heat is unevenly distributed across the Earth's surface. Equatorial and tropical regions receive far more solar energy than the midlatitudes and the polar regions.

The tropics receive more heat radiation than they emit, while the polar regions emit more heat radiation than they receive. If no heat was transferred from the tropics to the polar regions, the tropics would get hotter and hotter while the poles would get colder and colder. This latitudinal heat imbalance drives the circulation of the atmosphere and oceans.  Around 60% of the heat energy is redistributed around the planet by the atmospheric circulation and around 40% is redistributed by the ocean currents. 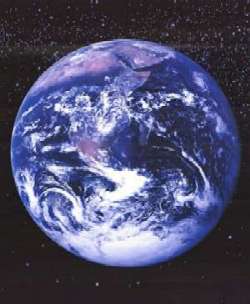 One way to transfer heat from the equator to the poles would be to have a single circulation cell where air moved from the tropics to the poles and back.  This single-cell circulation model was first proposed by Hadley in the 1700’s. 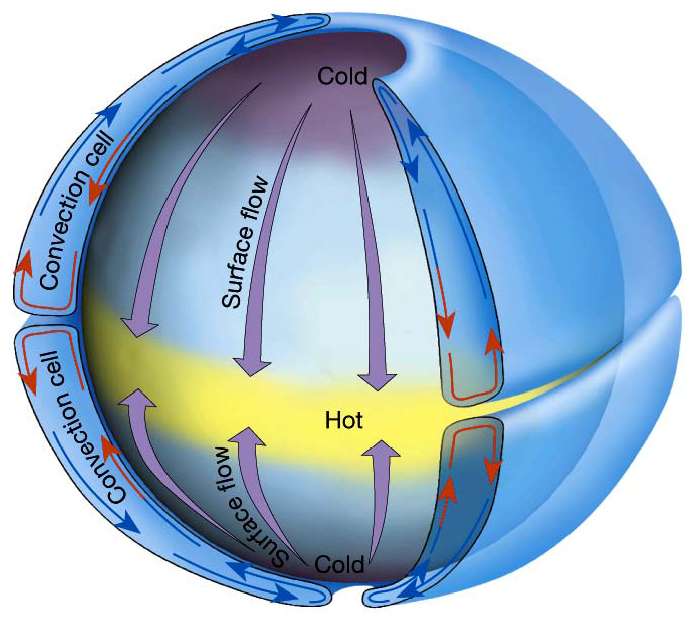 2. Air circulation around the globe would be simple (and the weather boring) if the Earth did not rotate and the rotation was not tilted relative to the Sun.

Since the Earth rotates, its axis is tilted and there is more land in the Northern Hemisphere than in the Southern Hemisphere, the actual global air circulation pattern is much more complicated. Instead of a single-cell circulation, the global model consists of three circulation cells in each hemisphere. These three cells are known as the tropical cell (also called the Hadley cell), the midlatitude cell and the polar cell.

1. Tropical cell (Hadley cell) - Low latitude air moves towards the Equator and heats up.  As it heats it rises vertically and moves polewards in the upper atmosphere.  forming a convection cell that dominates tropical and sub-tropical climates.
2. Midlatitude cell (Ferrel cell) - A mid-latitude mean atmospheric circulation cell for weather named by Ferrel in the 19th century. In this cell
3. Polar cell - Here the cold air sinks forming the polar highs. At the surface, the air spreads out from the polar highs. Surface winds in the polar cell are easterly (polar easterlies).

Although still oversimplified, this three cell model can describe the main features of atmospheric circulation.

Main wind belts:
Because the Coriolis force acts to the right of the flow (in the Northern Hemisphere), the flow around the 3-cells is deflected.  This gives rise to the three main wind belts in each hemisphere at the surface:
· The easterly trade winds in the tropics
· The prevailing westerlies
· The polar easterlies

Doldrums, ITCZ:
The doldrums are the region near the equator where the trade winds from each hemisphere meet. This is also where you find the intertropical convergence zone (ITCZ).  It is characterized by hot, humid weather with light winds.  Major tropical rain forests are found in this zone. The ITCZ migrates north in July and south in January.

Horse latitudes:
The horse latitudes are the region between the trade winds and the prevailing westerlies.  In this region the winds are often light or calm, and were so-named because ships would often have to throw their horses overboard due to lack of feed and water.

Polar font:
The polar front lies between the polar easterlies and the prevailing westerlies. 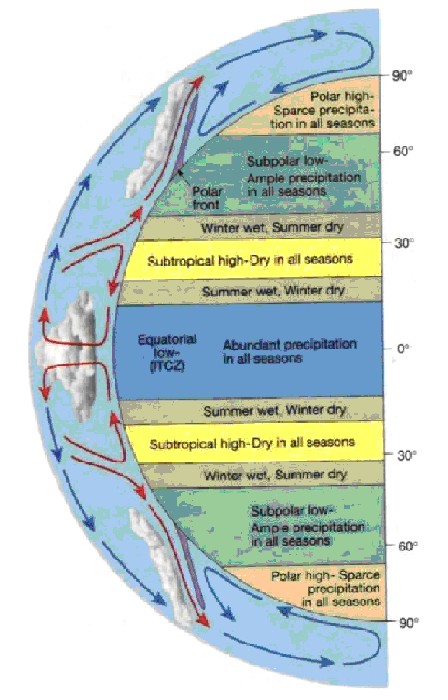 In reality, the winds are not steady and the pressure belts are not continuous.

There are three main reasons for this:
· The surface of the Earth is not uniform or smooth.  There is uneven heating due to land/water contrasts.
· The wind flow itself can become unstable and generate “eddies.”
· The sun doesn’t remain over the equator, but moves from 23.5 oN to 23.5 oS and back over the course of a year.