The distribution of crops over the world

Humans have probably always recognised just how important climate is to life and to plant growth.  The earliest recorded documents which talk about plant development and distribution are more than 2000 years old.

Light intensity, temperature and water all affect where natural vegetation and crops grow on the Earth. 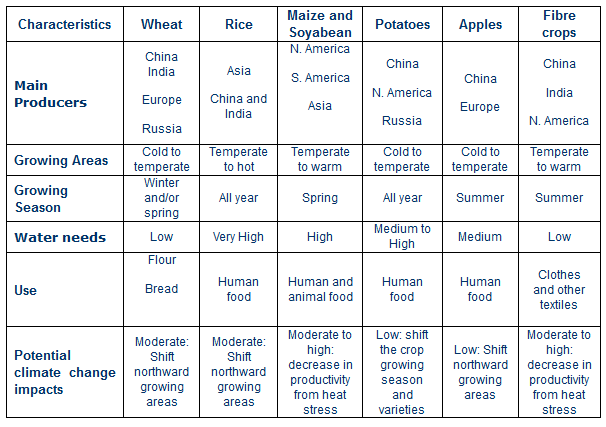 The table above shows the conditions needed for successful growth of different crop types. Some crops are adapted to grow at very low temperatures, while others only grow in warm climates.  Compare this table with the next graph which shows the main growing areas for some of the most important crops in the world; wheat, corn, rice and soyabeans as well as apples, potatoes and fibre crops. 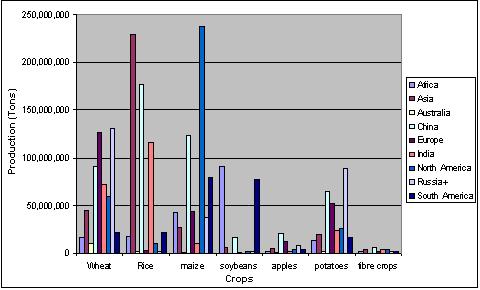 1. World production of the main crops in different regions.
By Marta Moneo, data obtained from FAO.

Now compare the first table with two maps of average temperature and average rainfall.  The table shows that rice will only grow in temperate areas with high rainfall and that China and India are the main cultivation areas.  The maps confirm that these areas have moderate temperatures and relatively high rainfall throughout the year.

2. Annual average rainfall amounts around the world.  Obtained from FAO.

3. Annual average temperatures around the world.
Obtained from FAO.

This map shows the distribution of mean temperatures around the globe.  Areas in blue are the coldest ones,  while the red colour marks the areas with warmer climates.

Another example is wheat, which is also one of the main crops in the world.  It has very different growing characteristics to rice. Wheat doesn't need alot of water and can survive at fairly low temperatures.  Look at the maps and figures and find out where most wheat is grown.

4. Rice production throughout the world (tons/year).  By Marta Moneo.

This map shows rice production throughout the world. It confirms that most rice is grown in China and India, areas with moderate temperatures and relatively high rainfall amounts.

5. Wheat production throughout the world (tons/year).
By Marta Moneo.

This map shows wheat production throughout the world.  The map shows that wheat is more adapted to different environmental conditions and can grow over much larger areas of the world compared to rice.  So, even though it grows best when it is warm with plenty of light and water, wheat can be grown successfully under less favorable conditions.