The Troposphere - variations with height and temperature

The lowest layer of our atmosphere, next to the Earth's surface, is called the 'troposphere'.  Put in sample terms it reaches from the ground to the highest clouds we can see.  If we look into the sky, this layer seems endless but it is really just a thin cover.  However it's really important to us, it protects us from the damaging rays of the Sun, contains oxygen so we can breathe and allows life to exist on Earth. 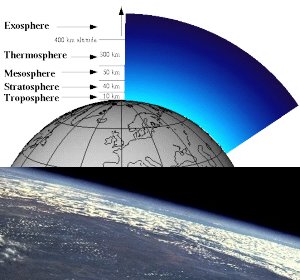 1. The atmosphere (shown in blue) consists of several layers.  The lowest layer is the troposphere.  Click on the image to see the enlarged diagram.  In this figure, the atmosphere is shown much thicker than it is in reality.  source: freeware STRATO, scheme: University of Cambridge.  http://www.atm.ch.cam.ac.uk/tour

Dimensions of the troposphere

The temperature profile and the transport of air

In the troposphere, the temperature decreases with increasing altitude, it becomes colder, the higher you go.  You can feel this temperature change if you hike in the mountains.  There is, however, a point in the atmosphere where this trend changes. This is the tropopause, a temperature minimum in the atmosphere. Some scientists call it a cold trap because this is a point where rising air can't go higher and it gets trapped.  The tropopause is very important for air movement and for chemistry in the troposphere, for cloud formation and for weather. Warm air is lighter than cold air.  If you open the door in winter you feel the cold air first at your feet, as it's heavier and sinks to the floor. Similarly, when the morning Sun heats the ground, the air starts rising.  As long as the air around it is colder (= heavier) the warm air continues to rise.  At the tropopause this travel stops as the air above is warmer and lighter.  This is the reason why it's difficult for water (clouds) and chemical compounds in the air to cross the tropopause, it acts as an invisible temperature barrier.  It's also why most of the chemistry and weather takes place in the troposphere.

2. Temperature profiles in the troposphere and lower stratosphere. Temperatures are given in Kelvin (K) and in Celsius (°C).  Source: unknown.  Adapted by Elmar Uherek from a lecture at Harvard University.
icg.harvard.edu/~eps132/lecture.dir/lecture3a/notes.htm

The real world is, however, a little bit more complicated. It isn't the same temperature everywhere at the ground or at the tropopause and temperatures change with season (although this change is only small in the tropics).  This figure gives an idea how the temperature profiles look at different latitudes in the summer and the winter.

We divide the troposphere further into two sublayers, a layer which is directly influenced by the surface of the Earth known as the planetary boundary layer, and the free troposphere above.  In the planetary boundary layer, processes such as friction, heat transport, evaporation, and air pollution lead to changes in conditions which occur within one hour. The thickness of this layer varies between a few hundred meters and about two kilometers.  Mixing of air as warm air rises from the ground is the most important process which occurs in this layer.

Find out more about the planetary boundary layer in:
Lower Atmosphere - More - Unit 1 - Night and nitrate

Find out more about the layers in the atmosphere in:
Higher Atmosphere - Basics - Unit 1 - Layers