Greenhouse gases and their effect 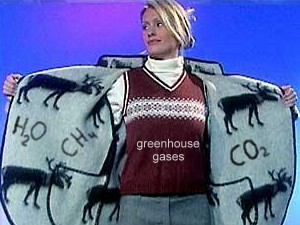 So greenhouse gases do the same with the heat radiation from the Earth as a pullover does with our body in winter. They hold back the warmth and cause a warm layer to form around the Earth's surface.

2. Light coming from the Sun is mostly visible light, the dangerous ultra-violet part is absorbed by the ozone layer. This sunlight is either reflected back into space by the light coloured parts of the Earth's surface (ice, snow and clouds) or reaches the Earth's surface and heats it up (symbolised by the red colour).  Author: Elmar Uherek.

3. Warm infrared heat radiation (invisible to our eyes) is emitted by the Earth.  Greenhouse gases in the atmosphere (symbolised by blue ellipses) absorb the infrared radiation and send part of the heat back to the Earth and part of it back into space.  Author: Elmar Uherek.

Which gases contribute to the greenhouse effect? 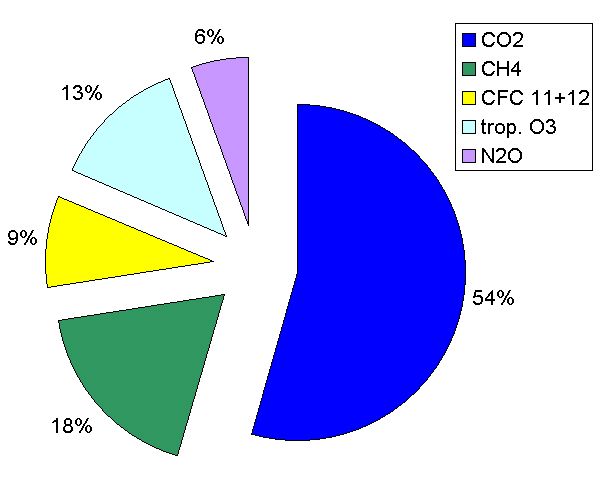 4. Contributions of the tropospheric greenhouse gases to radiative forcing between 1750 (preindustrial times) and 2005.  This is a measure of the additional greenhouse effect resulting from human activity.  Carbon dioxide has the greatest effect.   Author: Elmar Uherek.  Values from IPCC AR4 2007.

In some scientific publications the contribution of the greenhouse gases to the warming of the Earth is called 'radiative forcing'.  It is measured in watts per square meter (W m-2).  Between 1750 (when the industrial revolution started) and today, the concentrations of greenhouse gases have increased dramatically as a result of human activity.  The numbers on the right show the increase in radiative forcing during this time.

You can learn more about radiation,  greenhouse gases and the energy balance of the Earth in:
Lower Atmosphere - More - Unit 2 - Radiation