Ozone is probably the most famous gas in climate science. Why is this the case?

Ozone is a very contradictory gas.  It is essential in the stratosphere where it protects us from damaging ultra-violet radiation from the Sun, but it is harmful in the troposphere with high levels causing health problems.  In some large cities, car traffic is banned on particular days to prevent ozone smog events from occurring.

As well as causing health problems, tropospheric ozone acts as a strong greenhouse gas and contributes to global warming.

The ozone layer in the stratosphere occurs at altitudes of greater than 10 km.  This ozone is essential since it prevents harmful ultra-violet radiation from the Sun reaching the Earth and prevents us from getting skin cancer.

We need a small amount of ozone in the troposphere since it helps clear the air of harmful chemicals.  However over the past few decades, ozone levels have risen continuously.  During ozone smog events, levels can be so high that they are dangerous to our health. 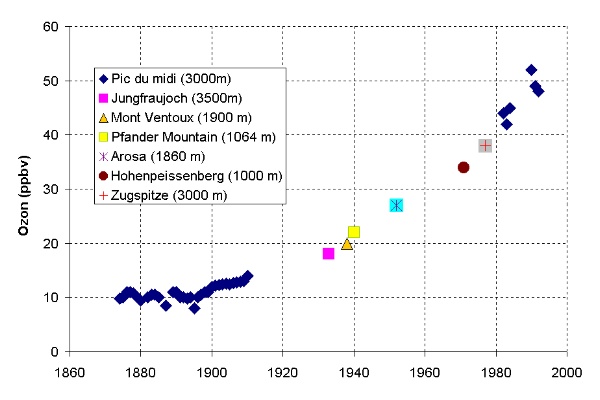 2. Tropospheric ozone levels have continuously increased since the first measurements were made in 1870. The diagram shows the fraction of ozone in every billion volume fraction of air = ppbv.  Composed by Valérie Gros, MPI Mainz, adapted from:  Marenco et al., 1992 (Long term evolution of ozone at the mid-latitudes of the Northern Hemisphere, European Geophysical Society, XVII General Assembly, 6-10 April 1992, Edinburgh).

Danger to the respiratory system 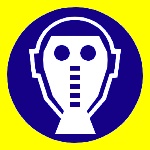 Ozone is a reactive and irritant gas and, in high concentrations, leads to respiratory problems. It causes inflammation in the lungs and bronchia.  Our bodies try their best to protect our lungs from the ozone.  However, preventing ozone from entering the lungs also reduces the amount of oxygen we can take up and this makes our hearts work harder.  People with respiratory problems such as asthma are particularly at risk of health problems.  In the worst case, high ozone levels can cause death.

Ozone - a special form of oxygen

Ozone is a special form of oxygen. Normal oxygen molecules (O2) consists of two oxygen atoms whereas ozone consists of three (O3).  It is less stable, more reactive and is able to destroy organic material.  This is how it damages plants and causes human health problems.  We look at how this happens in more detail in the 'read more' section of this Unit.

3. The three forms of oxygen, all with very different stabilities. The arrow shows increasing reactivity.
Image by Elmar Uherek.

Forms of oxygen in the air

Ozone as a greenhouse gas

After carbon dioxide (CO2) and methane (CH4), tropospheric ozone is the third most important greenhouse gas, able to absorb heat radiation coming from the surface of the Earth and trap this heat in the troposphere.  The additional radiative forcing (

F) since the Industrial Revolution (about 1750) gives us a measure of the contribution of human activity to the warming of the Earth. The graph shows the impact of tropospheric ozone (grey column) compared to other greenhouse gases.

Tropospheric ozone causes health problems for animals and damage to plants and acts as a strong greenhouse gas contributing to global warming.  So we need to look for ways to reduce ozone concentrations in the troposphere. 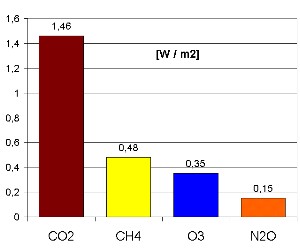 4. The contribution of different greenhouse gases to radiative forcing (

Calculate how much each greenhouse gas contributes to global warming!

F at the tropopause (given in W m-2).  The equation below shows how the average temperature at the Earth's surface (

Can you calculate the temperature change (