What is air pollution?

Air pollutants can be either gases or aerosols (particles or liquid droplets suspended in the air).  They change the natural composition of the atmosphere, can be harmful to humans and other living species and can cause damage to natural water bodies and the land.

Clean air is made up of naturally occurring chemicals.  Oxygen and nitrogen make up 99% of dry air and the remaining 1% consists of argon, carbon dioxide, helium and other trace gases.  Air, of course, also contains water vapour and this may make up as much as 4% of the total air volume.  Clean air doesn't contain harmful levels of chemicals or harmful chemicals which adversely affect living things.  Some gases which are normal components of clean air - for example, carbon dioxide - become dangerous when their concentrations become much higher than normal. 1. Clean air and plants.   Lichens living on tree trunks are very sensitive to air pollution.  They can only survive in clean air so are a good measure of how polluted the air is.  Source: www.freefoto.com Air pollution has both natural and human sources.

Natural air pollution comes from volcanoes, natural forest fires, soil, plants, seawater, wetlands and even outer space.  Inputs of gases and particles from these sources into the air has always happened and the atmosphere adjusts to this new material with minimal complications.

Human, or anthropogenic, air pollution comes from the many different human activities which occur during our daily lives.  Sources include industry, vehicles, agriculture, power generation (coal, oil or gas power stations), mining and waste dumps.  It is difficult for the atmosphere to cope with these these extra pollutants leading to high concentrations locally and regionally. Air pollution can be divided into two basic types. Gases come mainly from the burning of fossil fuels.  Gaseous pollutants which affect the atmosphere globally include carbon dioxide (CO2), methane (CH4) and nitrous oxide (N2O).  These are all  greenhouse gases and are responsible for global warming. Although present throughout much of the atmosphere, gaseous pollutants including nitrogen oxides (NOx), sulfur dioxide (SO2), carbon monoxide (CO) and a wide range of organic compounds are found only in signficant concentrations close to their origin so these are important on a local and regional scale. All these compounds are released during fossil fuel burning although many volatile organic compounds (VOC's) also have significant natural sources from plants.

Both the greenhouse gases and regionally important gases are examples of primary pollutants.  These species are emitted directly into the air from sources at the Earth’s surface.

The regional gases can also react chemically in the atmosphere to form other compounds which are known as secondary pollutants.   One of the main results of secondary pollution is photochemical smog.  Smog is the main pollutant problem in most of the big cities of the world.  Its main component is ozone (O3) which, at high concentrations, can cause breathing problems and burning eyes.  While O3 is beneficial in the stratosphere because it absorbs harmful ultraviolet radiation from the Sun, it is a health hazard in the lower atmosphere.  Use the link at the bottom of the page to find out more about ozone smog.

The second type of pollutant is particulate matter, which consists of a wide range of liquid and solid particles known scientifically as aerosols.  The smallest of these particles are hazardous to human health.  As with the gases, particles can be directly emitted into the air or can form from gases. In winter in many cities and towns, particularly in poor countries, people burn wood to keep warm. The particles from wood-burning can cause a brown haze over the region and larger particles may interfere with plant growth because they deposit on the leaves.  See the link at the bottom of the page to find out more about aerosols and their origin. Two hundred years ago, air pollutants were mainly from natural sources. The rapid development of industry after 1850 created many new anthropogenic pollution sources, which were initially associated with the production of energy from coal and oil burning.

Air pollution is a major environmental issue in many parts of the world. Unless we control and manage air pollution carefully, air pollution problems will become a lot worse.

The figure below summarises the criteria we use to classify air pollution. The Colours in the text correspond to the colours used in the figure. 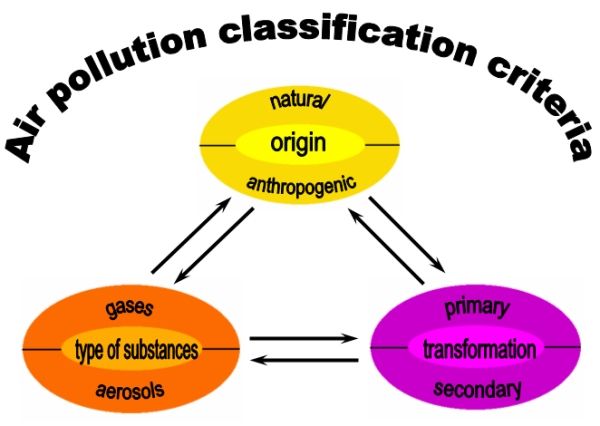 Natural air pollution can be divided into:
- inorganic pollution, e.g. dust and gases from volcanic eruptions, salt particles brought by the wind from the sea, dust delivered into the air during dust storms, gases originating from lighting during thunderstorms and dust coming to the atmosphere from space.
- organic pollution, includes smoke and dust from vegetation fires, pollen and fungi from plants, live organisms including bacteria and volatile substances emitted by trees and flowers.

Anthropogenic air pollution can be also divided into two groups according to the character of emission:
- controlled emission which takes place according to well established rules, under the supervision of trained staff.
- accidental emission which occurs, for example, during industrial accidents and oil spills. 7. Fire-places are probably one of the first anthropogenic indoor sources of air pollution.  Source: www.freefoto.com

The air pollution types mentioned so far are also known as outdoor air pollution.  Indoor air pollution is also a very important problem.  The air within homes and other buildings can sometimes be more polluted than the outdoor air even in the largest and most industrialised cities. Sources of indoor air pollutants such as carbon monoxide (CO) include poorly maintained fires, stoves and heaters.  This is a serious problem particularly in poor countries where standards of living are low.

Other sources of indoor air pollution include tobacco products, products for household cleaning and maintenance, personal care, or hobbies.  Inadequate ventilation, high temperatures and high humidity allow the pollutants to accumulate.   Many people living in the cities spend approximately 90% of their time indoors. So for many people, exposure to indoor air pollutants poses a greater risk to their health than do outdoor air pollutants. 8. Indoor pollution.  Smoking a cigarette, pipe, or cigar delivers a complex mixture of over 4,000 compounds, more than 40 of which are known to cause cancer in humans or animals and many of which are strong irritants.  Source: US Environmental Protection Agency; photo: www.freefoto.com