We have already looked at air pollutants which have either global or local influence. The local effects of air pollution include reductions in the quality of the soil, water and vegetation. 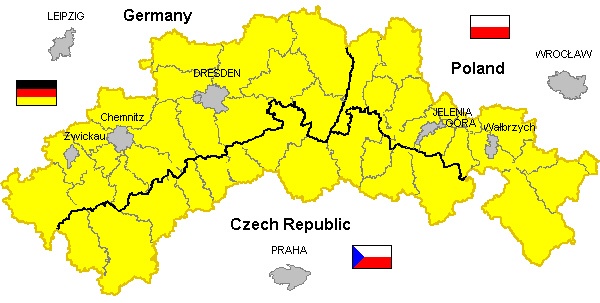 Winds transport air pollutants from one place to another, even from one country to another.  As a result, the impact of a particular pollutant may be felt far away from the emission source.  A good example is the so-called "Black Triangle", an area located at the junction of the Polish, German and Czech borders. In this region there are three big lignite fields where brown coal is mined: Turoszow field, Lusatian field and North-Czech field, together with seven power plants producing 16,000 MWatts of energy. In 1989 this region, covering just 32,400 km2, was responsible for 30% of the total European emissions of SO2.  These SO2emissions contribute significantly to the acid rain problem (see the section on Areas endangered by acid rain).

Acid rain falling in this region caused the largest European event of mountain forest decay seen so far.  Between 1981 and 1987, 11,000 hectares of spruce forest in the Sudety Mountains were damaged, of which 10,000 hectares were in the Western Sudety area.  At the same time, 15,000 hectares of forest were destroyed in the North West Czech Republic and Saxony.

At the beginning of the 1990's co-operation between the three countries lead to action being taken to improve the natural environment.  In 1992, an integrated network of 43 automatic monitoring stations was established in Poland, The Czech Republic and Germany and SO2 sources were reduced by modernising power plants and heating systems. Another factor which contributed to the improvement of air quality was the economic crisis and decrease in industrial production in Central European countries. As a result of all these factors, emissions of harmful substances decrease every year. 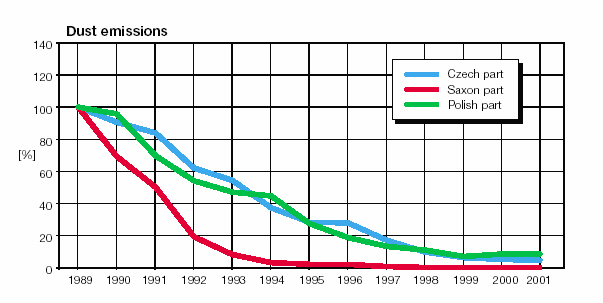 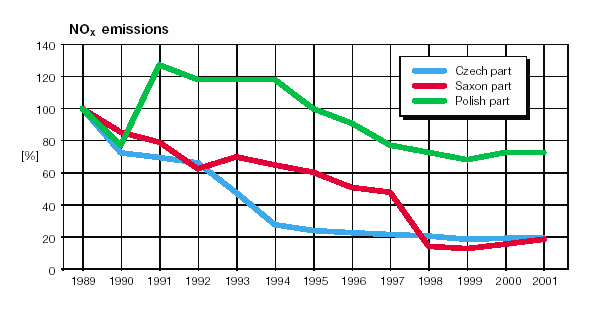 2. Dust, SO2 and NOx emissions in the Black Triangle Area.
Source: Inspectorate of Environmental Protection in Wroclaw. Branch Jelenia Gora.

Technological risk is an element which has accompanied industrial development right from its beginning. Every installation may malfunction at some point during its operation and people working with the machines and systems can always make mistakes. When an industrial catastrophe takes place, the atmosphere usually gets polluted with very toxic chemicals or radioactive substances, for example in the case of nuclear power plant disaster. Here are a few examples of such events and their effects:

- 1930 - smog in the Mosa valley (Belgium), sulphur dioxide air pollution caused the death of a few hundred people.
- 1948 - Donora (USA), smog killed 20 people.
- 1950 - Pozza Rica (Mexico), uncontrolled emissions of  hydrogen sulfide (H2S) during a plant malfunction caused respiratory problems in over 300 persons and 22 people died.
- 1952 - smog in London, four thousand people died.
- 1984 - chemical catastrophe in Bhopal (India), 3400 people died, 600 thousand suffered from respiratory problems.
- 1986 - accident at the nuclear power plant in Chernobyl (former USSR, present Ukraine), 31 people died in the first week after the explosion, the exact total number victims are not still not known today; it is estimated that a few million people still suffer from diseases caused by the radiation: cancer (an increase in thyroid cancer has been observed in the surrounding area), immunological dysfunction etc.; large areas were polluted for many years.
- 1991-92 - oil fires during the war in Kuwait and Iraq.