What controls the urban climate?

Urban climates are the result of the  interaction of many natural and anthropogenic factors.  Air pollution, building materials, emission of heat from human activity, together with natural factors, cause climatic differences between cities and non-urban areas.

The climate of a particular city is controlled by many natural factors, both at the macro-scale (e.g. the latitude) and at the meso-scale (e.g. the topography, the presence of water bodies).  As a city grows and develops, new factors modify the local climate of a city and contribute to the formation of distinct urban climates. 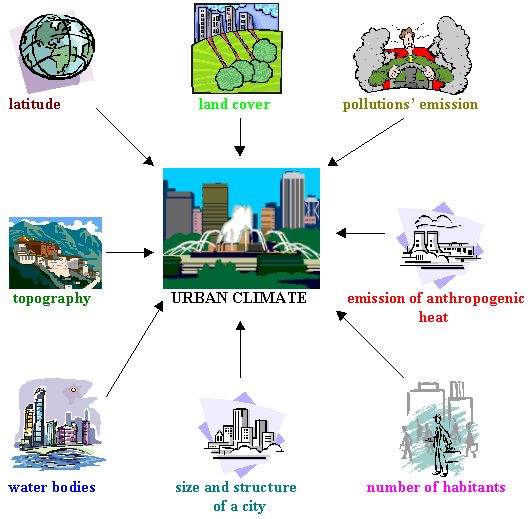 Large numbers of buildings and streets mean that a large proportion of the ground surface in cities is covered by impermeable materials such as concrete and asphalt.  The original, natural land cover may be preserved in lawns or parks, but usually occupies only a small part of the city area.  The city surface often, therefore, has a very complex character consisting of a mosaic of different surface materials.  Each surface material has a different albedo, a measure of the amount of solar radiation reflected back into space or absorbed by the surface.  For a city as a whole, the albedo can be as low as 10-15% (the albedo for fresh snow is greater than 80%) which means that a lot of the incoming solar energy is absorbed by the city. Additionally, most of the building  materials used in the construction of cities are characterised by a high heat capacity and high heat conductivity.

In addition, the shape of a city tends to trap radiation near the surface.  This means that a lot of energy is stored in the city during the day-time and this is then gradually lost during the night.  This slows down the night-time cooling of a city compared to non-urban areas. 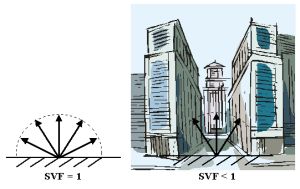 3. Sky view factor.  The sky view factor (SVF) is reduced by the urban built-up. The maximum value of the SVF is 1 which occurs for open areas, without any trees, houses, etc.  Author: Sebastian Wypych (after Oke, 1987).

Another important factor modifying urban climate is air pollution. This changes the composition of the urban atmosphere and, as a result, reduces the amount of solar radiation reaching the ground surface. In other words, pollutants make the air less transparent to sunlight.  Urban air pollution consists of gases and particles emitted by industry, vehicles, heating systems etc.  The city centre is usually more polluted than the suburbs but this depends on where industry and busy roads are located.  During the day-time, the highest air pollution concentrations tend to be seen during rush hours.  Over the year, highest concentrations are generally seen in winter because of the increased combustion of fuels for heating and because atmospheric conditions are such that polluted air is less likely to mix with clean air and dilute the pollutant concentration.  The exception to this is photochemical smog which needs sunlight to form and so is seen in the summer (find out more about this in the sections on ozone smog and negative effects). 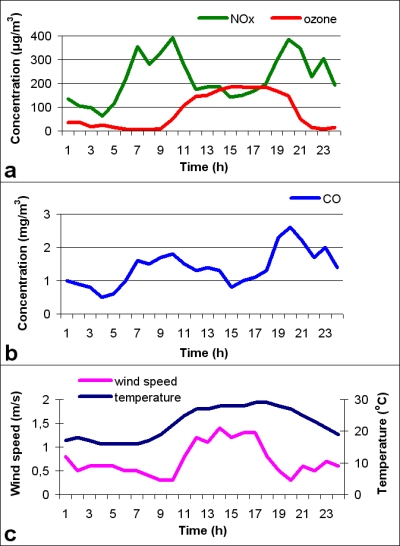 In the summer, vehicles are the main source of air pollution.  In the morning, intensive traffic causes high emissions of nitrogen oxides and carbon monoxide (Fig. 4a and 4b).  Around noon and in the afternoon, as the temperature rises and wind speed is low (Fig. 4c), chemical reactions in the presence of sunlight cause a decrease in nitrogen oxides levels and an increase of tropospheric ozone (Fig. 4a).
These measurements were made in the middle of a busy two-way street (Krasinskiego Avenue).  The air pollutant concentrations were measured at 4 m above the surface, wind speed was measured 10 m above the surface and air temperature was measured 6 m above the surface.  Authors: Anita Bokwa, Sebastian Wypych.  Source of data: Voivodship Inspectorate of Environmental Protection in Cracow. 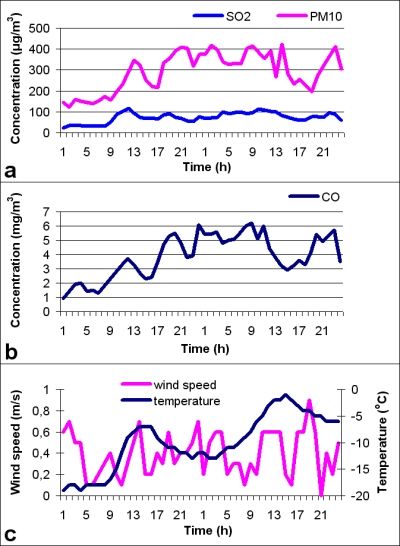 In the winter, emissions from energy production are the main source of air pollution.  As the air temperatures are  significantly below zero (Fig. 4c) heating is essential but the result of all this energy production is high atmospheric concentrations of  particulate matter (so called PM10, i.e. particles with a diameter of 10 micrometers or less), carbon monoxide and sulphur dioxide (Fig. 4a and 4b).  As the wind speed is low and the air temperatures below zero, layers form in the atmosphere which trap the air pollutants close to the surface.  This means that pollutants are not lost from the city and concentrations remain high.  The measurements of air pollutants were made in the middle of the city's central square (The Main Market Square), 12 m above the surface level (the instruments are installed at the wall of the Town Hall Tower). The wind speed was measured 10 m above the surface, and the air temperature was measured 6 m above the surface.  Authors: Anita Bokwa, Sebstian Wypych.  Source of data: Voivodship Inspectorate of Environmental Protection in Cracow.

Another important factor controlling urban climate is anthropogenic heat.  This is heat released as a by-product of heating systems in winter (and air conditioning in summer), or from other activities (combustion of fossil fuels, industrial production and from vehicles). The amount of heat emitted depends upon the energy use by individuals, the population density, the amount of industry and the city's location. 6. Domestic heating is one source of anthropogenic heat.
Source: www.freefoto.com

In cities the amount of water lost by evaporation is low because artificial surfaces do not absorb water in the same way as natural surfaces do.  When it rains, water quickly runs off into urban sewer systems and buildings and roads dry out rapidly.  This means that excess heat is not used to evaporate water (as there is little lying on the ground) but rather warms the air.   The presence of large amounts of vegetation in many cities does, to some extent, counteract this effect.

The impact humans on urban climate depends on the city's size and its spatial structure, on the number of inhabitants, and on the concentration of industry.  Small towns with relatively low buildings spread among green areas and without any factories or industrial plants, tend to modify the climate less than cities with tall buildings.

How much influence anthrogogenic factors have on local climate depends on the natural setting of a city.  For example, a city located in a deep valley may experience frequent fogs and gentle winds.  This means that any air pollutants are trapped at the surface and air quality is generally poor.

The urban climate can be improved by planning the urban structure in such a way as to decrease the negative impact of both anthropogenic and natural factors. For example, through the strategic location of parks and water bodies (e.g. ponds and lakes) and by building factories downwind of the city so that air pollution is taken away by the wind and not brought into the urban environment. 7. Fog reduces air quality in a city.  It can react with air pollutants to form acid fogs.
Source of image:www.freefoto.com