Burning fuels such as coal, oil, gas and petrol to produce energy and to power vehicles causes the emission of many different chemical species into the atmosphere.  Each fuel delivers a slightly different cocktail of pollutants into the air.

Most of the electricity produced worldwide results from the combustion of oil, coal and natural gas.  Natural gas (methane,  CH4) is a relatively clean fuel and coal is the dirtiest.  Large amounts of both gases and particles are emitted into the air when coal is burnt in power stations.  The gases emitted include sulphur dioxide (SO2), nitrogen oxides (NOx), carbon monoxide (CO) and carbon dioxide (CO2) and the dust contains heavy metals such as lead (Pb), zinc (Zn) and cadmium (Cd).  Burning fossil fuels in Europe in 1998 resulted in emissions of about 5,670,000 thousand tonnes of CO2 into the air.  Coal contains more sulphur than the other fossil fuels but the amounts vary significantly depending on the origin of the coal.  Coal combustion is the largest source of SO2 to the atmosphere and these emissions contribute significantly to the acid rain problem. Some countries do not rely completely on fossil fuels to produce electricity.  This generally leads to an improvement in air quality on both a local and on a global scale.  For example, around 65% of the electricity produced in France comes from nuclear power plants and in Norway, over 90% comes from hydroelectric power plants.

Vehicles are responsible for a significant part of global air pollution.  In the developed countries, vehicles are a bigger source of air pollution than industry.  On a global scale, cars emit about 300 million tonnes of toxic exhaust gases into the atmosphere each year. The exhaust gases from petrol engines contains CO and NOx, hydrocarbons, some SO2 and solid particles, while diesel engines emit less toxic gases (e.g. 20 times less CO, 8 times less hydrocarbons) but many more particles.  In Europe and North America, only 10% of the NOx emitted into the air is of natural origin, the remaining 90% comes mainly from high temperature (1,200 to 1,800 oC) combustion in vehicle engines.

Vehicles used to be an important source of lead into the atmosphere due to the use of lead containing petrol.  Due to health concerns, leaded petrol has now almost been phased out and atmospheric lead concentrations are declining rapidly.   In the 1970's, a single bus engine produced, on average, 1000 m3 of exhaust gases per hour and these gases contained 3.5 g of lead (a concentration of 3500 µg m-3).  Sale of leaded petrol was banned in the Europe in 2000 and the European Union limit for atmospheric lead is now just 5 µg m-3 over a 30 minute time period.  However, the effects of lead and other heavy metals on human health continue to be a problem as these metals accumulate in the body and act slowly. 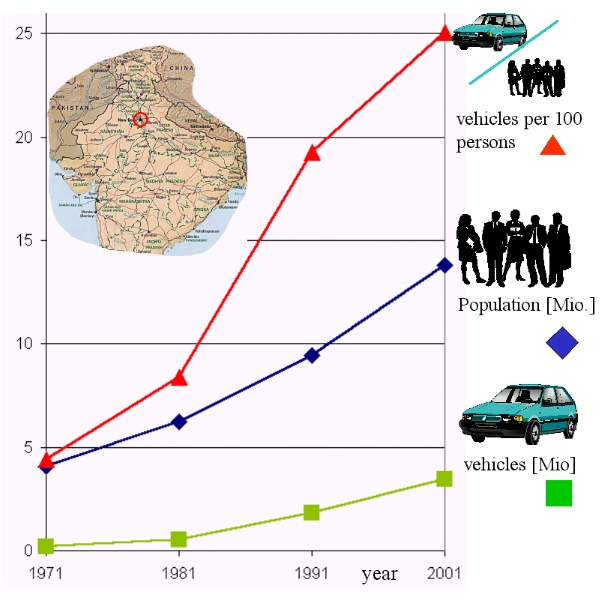 Particles not only come from the combustion of fossil fuels but also from the road surface and from the car tyres and the brakes.  As well as containing harmful chemicals, these tiny particles travel deep into our lungs when we breathe and cause respiratory problems. 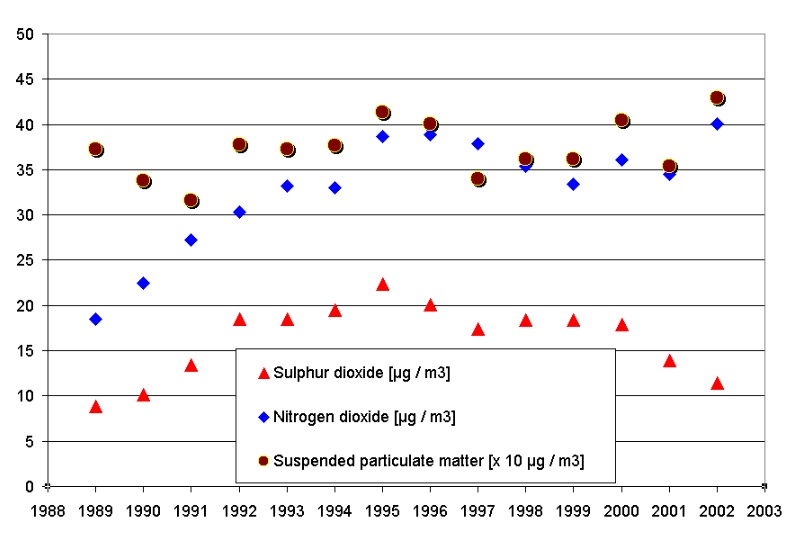 Aeroplanes are another important source of atmospheric pollution.  One jet plane emits as much pollution as 7,000 cars over the same time period.  Unlike cars, aeroplanes emit their pollutants into the higher atmosphere and may, as a result, damage  the stratospheric ozone layer.

Read how air-planes deliver the pollution to the higher atmosphere in:
Higher Atmosphere - More - Unit 1 - Aviation