Industry and other economic sectors

Although energy production and transport are the most common sources of air pollution, industry and agriculture also emit significant amounts of pollutants into the air. Factories producing materials for the building industry emit large amounts of dust to the atmosphere. Cement plants discharge chemically neutral dust in huge quantities.  This dust can be transported large distances by the wind and affect areas far away from the cement plant itself.

Other types of factories in this sector include quarries, glass-works, aggregate-processing plants and ceramic plants.  They tend to only have a local impact on air pollution. The chemical industry emits a wide variety of pollutants, the types dependant on the chemicals being manufactured. Common chemicals produced include nitrolime, phosphates, petrol, car oils and greases and artificial fibres. The basic raw materials in the production of artificial fibres are carbon disulphide (CS2) and hydrogen sulphide (H2S).  Both these substances are also emitted into the air. Apart from being highly toxic, they also have a very unpleasant smell. 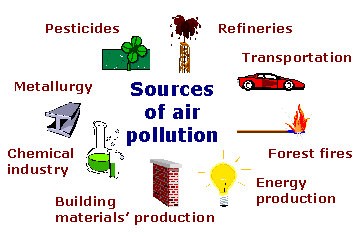 Other branches of industry worth mentioning are: 1) paper-mills which emit many malodorous substances and 2) machine manufactures who use plating and varnishing processes, these emit heavy metals and organic solvents. Agriculture is also a source of air pollution. Large stores of manure emit gases such as ammonia (NH3).  Artificial fertilizers and pesticides are often spread over fields from aeroplanes and this delivers very fine droplets of the chemicals into the air.

Erosion of the soil surface can generate large amounts of fine particles which can be transported large distances by the wind. Volatile Organic Compounds (VOC's) are chemical substances containing mainly carbon and hydrogen.  Hydrocarbons are an important component of the VOC's.  The most common VOC is methane (CH4) but this is not usually included in the sum of all the VOC's but is rather included as a greenhouse gas.  Other important hydrocarbons include benzene, terpene, isoprene and benzopyrene. They are produced by both natural and anthropogenic sources. Total emissions from natural sources are much bigger than from anthropogenic ones, but in urban areas it is the anthropogenic one that dominate. The main sources are car exhaust gases and solvent use in industry.  In 1995, 159,634 thousand tonnes of VOCs (excluding methane) were released globally to the atmosphere from the incomplete combustion of petrol by motor vehicles, the use of solvents in a variety of industrial and commercial processes and from chemical manufacturing and petroleum refining.  Around 23% (36,782 thousand tonnes) of the global emission of VOC's came from Europe. VOC's contribute significantly to the formation of photochemical smog and some are carcinogenic. 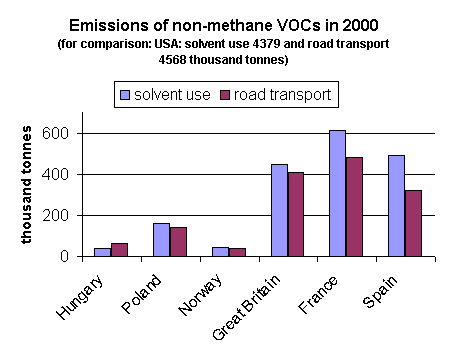