Radiation balance in a city

The Sun delivers enormous amounts of energy to the Earth.  In this section we look at how this energy is altered in the urban environment and how air pollution changes the radiation balance.

The Albedo (A) is the percent radiation reflected from a surface compared to the total amount which strikes it.  The albedo depends on the kind, colour and humidity of a surface and also on the amount of snow.  Building materials tend to have low albedos (they absorb solar radiation efficiently) compared to natural surfaces.  For example, 5 - 20% for asphalt, 10 - 35% for concrete, 20 - 35% for stone and 10 - 35% for roofing-tiles.  In comparison, the albedo for fresh snow is between 75 -95%, so most of the solar radiation which hits snow is reflected back into space.  Some natural surfaces do have low albedos, for example, chernozem (which is also known as black soil) has an albedo of 5 - 10% and deciduous forest is between 15 - 20%.  The albedo for water varies from a few percent to 90% depending on the angle of the incoming solar radiation (see the table below).

The amount of radiation absorbed by a city is about 15 to 30% greater than a non-urban area.  In addition, all the different artificial surfaces form a sort of mosaic and cause large spatial variations in the albedo.  This, in turn, affects the air temperature of the city.

1.  Variation of the albedo of water as the angle of the Sun changes.

The amount of global solar radiation (i.e. both direct and diffuse solar radiation) may be between 10 and 20% less in a city due to air pollution and increased cloudiness.   The direct radiation may be reduced by as much as 50%.  This means that the amount of incoming ultra-violet radiation is less.  Reductions in this biologically active radiation lowers our risk of skin damage but also decreases the number of harmful bacteria which are killed.  The air pollutants form aerosols which absorb the long-wave radiation from the Earth (Ez), and then radiate it back into space (Ea). All these factors cause an increase in air temperature in the cities compared to the surrounding non-urban areas. 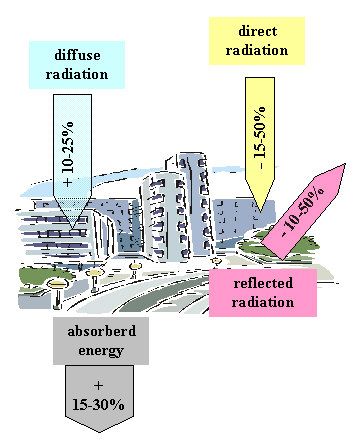 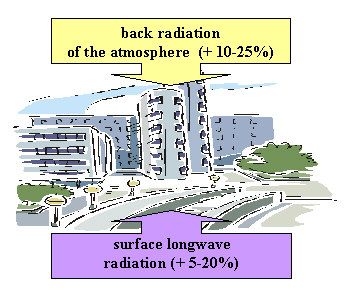 Political and economic changes in Central Europe have led to reductions in the amount of air pollution and changed the urban radiation balance in this area. In the 1990's, most post-communist countries experienced economic crisis and a decline in industrial production.  This resulted in lower emissions of air pollution.  In addition, new low emission technologies were introduced into many factories, further improving the air quality.  This reduced the number of aerosols in the air and changed the amount of cloud (through the indirect aerosol effect).  Between 1996 and 1999, the amount of radiation scattered back into space by clouds over mid-Europe decreased by 2.8% (compared to the years 1985-1989) leading to an increase in the solar flux of roughly 1.5 W m-2.