Heat balance in a city

People living in a city sometimes feel that the city centre is warmer than the suburbs.  In this section we look at how the air is warmed in a city and how the structure of the buildings affects the heat balance.

The radiation balance and the heat balance are closely correlated with each other. First, short-wave (ultra-violet) solar radiation reaches the surface of the Earth. A part of it is absorbed there and then re-emitted as a long-wave (infra-red) radiation (i.e. heat) into the atmosphere. The air is, therefore, warmed mainly by the ground and not directly by the Sun. 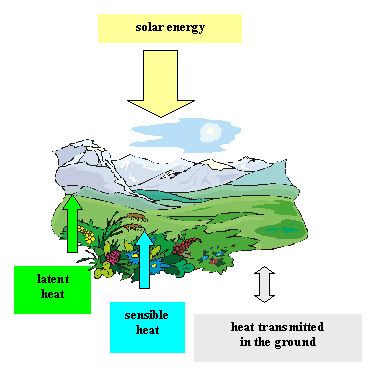 1. Heat emitted to the atmosphere in a non-urban areas
author: Sebastian Wypych

The heat balance of a natural surface such as a meadow, is the difference between the energy gained and the energy lost as described by the following formula:

where:
Q - net radiation at all wavelengths
H - turbulent sensible heat, absorbed or transmitted by the air or the Earth during a change in temperature
E - turbulent latent heat, released or absorbed during a change in the state of water (e.g. evaporation involves absorption of energy while condensation involves a release of energy)
G - heat transported by conduction in the ground

The term "turbulent" means that the heat is transferred by turbulent air motion, i.e. random and continuously changing motion. This turbulent motion is superposed on to the general movement of the air.

Note, during the day-time, the signs are different to the night-time:

Day-time: during the day, the air is colder than the ground (it warms up more slowly).  Transfer of heat tends to reduce the temperature difference and warm the air;

Night-time: at night the lack of sunshine means that no energy is delivered to the ground.  The ground cools faster than the air and heat transfer is from the atmosphere to the Earth's surface; 2. Sunrise and sunset mark the moments when the directions of heat flow begin to change
Source: www.freefoto.com

The heat balance of an urban area is more complex due to the presence of buildings. Thus, the heat balance for an urban area must include a storage term Qp for heat which includes heat exchange by conduction by the ground, streets and walls and a term, Qf, which represents the anthropogenic heat entering the atmosphere during fossil fuel combustion:

Note we ignore airmasses bringing heat into the city from outside, i.e. the influence of advected heat.  However, if we assume that a city is a rather uniform landuse type area, then this advection is actually negligible. 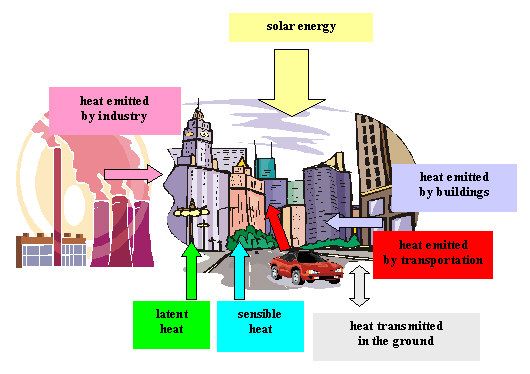 3. Heat emitted to the atmosphere in a city
Author: Sebastian Wypych.

Most materials used to build a city are characterised by high thermal conductivity (with units W m-1 K-1) which means that lots of heat enters the material and is transported from the surface to the deeper parts.  A city, therefore, cools down more slowly during the night than a non-urban area. The materials used to build a city are characterised also by high thermal admittance (with units J m-2 s-0.5 K-1), which is the ability of a surface to accept or release heat, i.e. it is the temperature change produced by a given heat flux change. Huge factories, such as steel-works, emit enormous amounts of heat. On average, one such factory delivers four times more energy every day into the urban atmosphere than the incoming solar radiation does.  Over a yearly cycle, the intensity of the anthropogenic heat emissions change in the same way as the intensity of the urban heat island.  In cold climates in winter, domestic heating and fossil fuel burning emit more energy into the air than the Sun, while in hot climates, air conditioning adds another heat load to the already hot air. 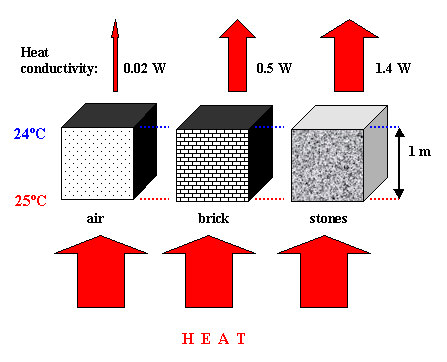 An important element of urban structure are so-called urban canyons, i.e. streets with rows of high buildings on both sides, analogous to river canyons. The amount of solar radiation received by an urban canyon as a whole depends on the height of the buildings and on the orientation of the canyon. Further, the properties of the materials used for the construction of buildings and streets are important, not only due to their thermal admittance, but also in terms of their albedo. A phenomenon known as solar trapping can occur in canyons whereby the solar radiation is reflected off many surfaces within the canyon,  allowing more opportunity for absorption (have a look at the concept of the sky view factor). In general, about 60% of the net all-wavelength radiation is released into the air as sensible heat and 30% is stored in the walls and streets.  Just 10% is used to evaporate water as the artificial surfaces do not store water as natural ones do and there is usually only a small amount of green area in a city.  These percentages vary for different cities and depend on, for example, the amount of park land and how much irrigation occurs.