Water balance in a city

The amount of rain is higher in urban areas than in non-urban areas, mainly due to short but intensive rainfall events. In a city, asphalt, concrete and stone surfaces dominate and reduce the amount of water which can penetrate into the ground.

For natural areas, the water balance is given by the following formula:

where:
P - precipitation (rainfall), the only source of water to the ecosystem

E - evapotranspiration, the amount of water evaporating from the ground combined with the transpiration of plants

S - groundwater storage (retention); note that a snow cover is a form of temporary water retention 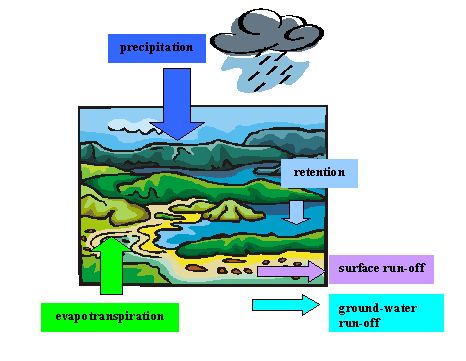 In an urban area, the water balance consists of the same elements, but their proportions are significantly different.

Precipitation is usually higher than in non-urban areas, evapotranspiration is much lower, surface run-off is much larger (ground-water run-off is small), and water storage is much lower. The changes are shown in Figure 2 and explained in the text below.   Note that the relative sizes of the arrows in Figures 1 and 2 show the differences between the natural and urban environments. 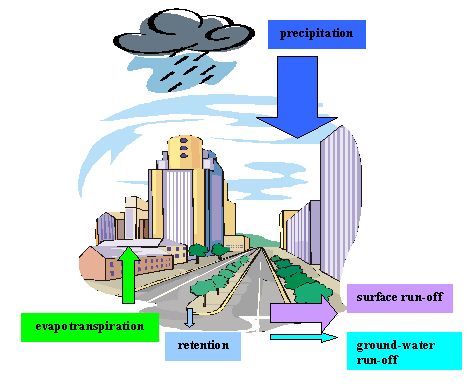 2. The water cycle in a city. Compare the thickness of the arrows with those in Figure 1 to see the differences!  Author: Sebastian Wypych.

The effect of a city on air humidity, precipitation and fog formation is uncertain.  Some cities have more days with fogs and a higher frequency of cumulus and cumulonimbus clouds than the surrounding non-urban area.  These phenomena are all favoured by high air humidity and the presence of large amounts of air pollution serving as condensation nuclei. In addition, cloud formation is enhanced by convection which is more intense in the city because of the urban heat island effect and fogs develop because the wind speed in the city is low.  Cities are found in all different geographical locations and the local conditions mean that all cities have different climates.  In addition, the presence of huge factories or power plants may affect the urban climate by, for example, emitting air pollutants, heat and huge amounts of water vapour from cooling towers into the air. 3. Rain in a city.  For both urban and non-urban areas, atmospheric precipitation is the main source of water.
Source: www.freefoto.com

The figure below shows the mean monthly temperatures and precipitation for chosen cities all over Europe. The amount of water delivered to a city depends primarily on its climatic zone, but the presence of a city can increase the natural amount of rain by as much as 20 to 30% compared to surrounding non-urban areas. 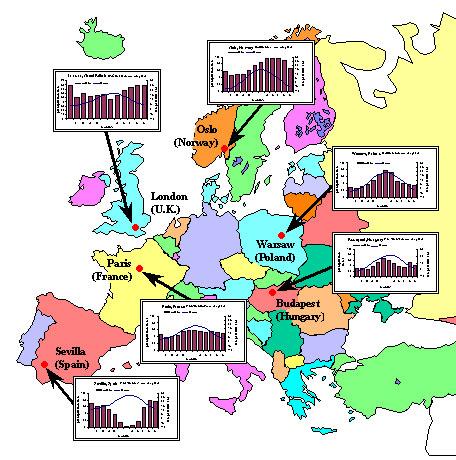 Evapotranspiration is low in cities.  It can be as low as 38% of the evapotranspiration in nearby non-urban areas. The process is mainly evaporation, not transpiration, as green areas are rather small and there are few plants to transpire. Evaporation is also low because there is little standing water.  Most of the rain goes down the drains and into the sewage system rather than penetrate into the ground. Asphalt, concrete and stone do not, generally, allow water to permeate through them.  Surface run-off is, therefore, almost four times larger in a city than in a non-urban area, and groundwater run-off is lower by about 50%. This results in low retention. Snow cover is a form of temporary water retention in a city. However, it disappears faster in a city than in the surrounding non-urban area due to the impact of the urban heat island and because of human activity, e.g. removal of snow from the streets.  In addition, air pollution falling on the snow in a city makes the snow dirty and decreases its albedo.  This allows the snow to absorb more energy and warm and melt faster. 6. Asphalt road.  Most cities are covered with buildings, streets and roads which do not allow water to permeate into the ground.  Surface run-off in cities is, therefore, much larger than in the surrounding non-urban area.
Source: www.freefoto.com

Rainfall, drinking water supplies  and human activities (street cleaning, watering lawns, water vapour from the cooling towers of power plants) are all sources of water in the urban environment.  This water can evaporate or enter the sewage system.  Humidity is mainly controlled by the wind speed with low wind speeds favoring high humidity.  During the night, the city centre is usually more humid than the suburbs because the buildings weaken the air flow. The suburbs, with more dispersed and lower buildings, are better ventilated and drier. 7. Watering a lawn.  Watering lawns or washing streets is an additional source of water to the city.
Source: www.freefoto.com