Acidic species are deposited to the ground both in precipitation (rain, snow, hail) and as dry particles.  Sunlight reacts with sulphur dioxide and nitrogen oxide gases in the air to form sulphuric acid and nitric acid.  The presence of other substances, including volatile organic compounds, also contribute to acid rain.

A closer look at pH

In the basics level chapter "What is acid rain?" we introduced the idea of pH as a measure of how acid a solution is. The pH scale was developed by Soren Sorenson in 1909 and the pH value of a solution is given by:

The construction of the pH scale is based on the fact that even pure water dissociates (splits) into its constituent ions, the hydrogen ion (H+) and the hydroxide ion (OH-). This process is known as auto-ionisation. In an aqueous solution, hydrogen ions are associated with water molecules to form the hydronium ion (H3O+).

The reaction is reversible so the products can recombine to reform the initial reactants and then dissociate again. The ratio of the products (H3O+ and OH-) to the reactants (two H2O molecules) is always constant.  This constant is called the ion product constant of water, Kw, and always has a value of 10-14.

Because Kw has a constant value, we can define acidic and basic solutions based on the relative amounts of H3O+ and OH- in solution:

Discovery of the acid rain problem

Acid rain was first recognised as a problem as far back as the end of the 17th Century.  In 1692, Robert Boyle published his book "A general history of the air", where he described it as "nitrous or salino-sulfurous spirits". The term "acid rain" was first used in 1872 by the Manchester scientist, Robert Angus Smith (1817-1884), in his book "Air and Rain: The Beginnings of Chemical Climatology".  It wasn't, however, until the 1960's that the large scale problem of acid rain was discovered.  Studies showed that the acidity of lakes in Scandinavia and North America were increasing and fish populations were decreasing and that forests were dying.  As a result of these scientific studies, political action was taken to try to reduce the problem of acid rain.

Anthropogenic emissions as a source of acid rain

Apart from emissions of sulphur dioxide and nitrogen oxides from the combustion of fossil fuels, there are also other substances which contribute to acid rain formation. These include hydrochloric acid and organic carboxylic acids. These organic acids include acetic acid and formic acid and are formed when volatile organic compounds (VOC's) are oxidised in the air. The VOC's have both natural and human sources. Human sources are primarily from vehicle exhausts and plants are the main natural source. Natural sources dominant the global emissions of VOC's, they are about ten times higher than human sources.

The double role of ammonia

Ammonia (NH3) is also a very important gas in the atmosphere. It is a basic gas and reacts with acids in the air to form ammonium (NH4+) aerosols. Ammonia gas reacts with sulphuric acid to form ammonium sulphate (NH4)2SO4 and with nitric acid to form NH4NO3. These reactions neutralise the acids and so reduce the acidity of the atmosphere. However, when ammonium aerosols are deposited to the ground they react with oxygen and a process called nitrification can occur:

In this process, hydrogen ions are released. So ammonium deposition and its subsequent nitrification leads directly to soil acidification. 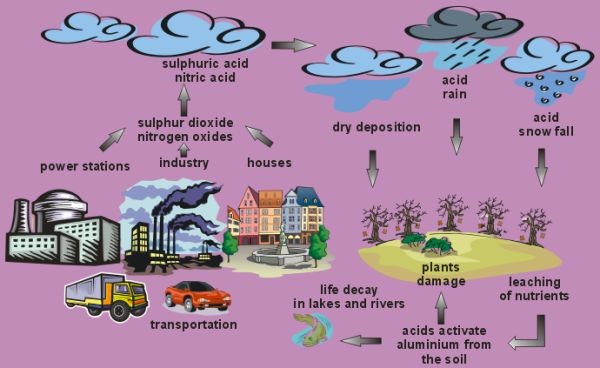 1. Sources and effects of acid rain and other forms of acid deposition.  Author: Sebastian Wypych.

Deposition is the process by which chemical constituents are removed from the atmosphere to the surface of the Earth.

The process by which chemicals are removed from the atmosphere and deposited on the Earth's surface via rain, sleet, snow, hail, cloud water, and fog is called wet deposition.

The dominant species responsible for acid rain are sulphuric acid and nitric acid.  These are formed in the air from the precursor gases, sulphur dioxide and the nitrogen oxides (NOx = NO + NO2).  Combustion of coal and oil in powerstations to produce energy is an important source of both these gases and car exhausts are an additional important source of nitrogen oxides.  The gases react with the hydroxyl radical (OH) and oxygen atoms (O) to form the acids.  Acid particles are very hygroscopic (i.e. they absorb water easily) so they can act as cloud condensation nuclei and enhance cloud formation.  When these clouds rain, acid rain reaches the ground.  On the way to the ground, the rain drops can scavenge more acid particles so increasing the rain acidity further. 2. a)  Trends in sulphate wet deposition (kg ha-1) in the Eastern United States from NADP/NTN Monitoring Data. The image on the left shows data for the period 1989-1991, while the image on the right shows data for 1995-1998. In the early 1990's, sulphate wet deposition was highest in a broad region of the Mid-western and Eastern U.S.A. including the Ohio River Valley, Western Pennsylvania, and the Mid-Appalachians (see 1989-1991) b)  As a result of significant reductions in sulphur dioxide emissions beginning in 1995 (Phase I of the Acid Rain Program), total sulphur deposition in rain decreased by up to 25% over a large area of the Eastern U.S., this reduction was unprecedented in magnitude and spatial extent (see 1995-1998).  Source: U.S. Environmental Protection Agency.

Dry deposited gases and particles can be washed from trees and other surfaces by rain. When this happens, the acidity of the rain increases further. Dry deposition usually occurs close to the emission source, whereas wet deposition can fall up to around a thousand kilometers away from the emission source. Use of high factory chimneys to disperse pollutants have greatly improved air quality in industrialised areas. The improvement of air quality has come at a cost and air pollutants are now blown large distances by the wind and affect much larger areas. Because of this long range transport, acid rain generally creates greater problems than acid dry deposition.