Why does air circulate and what are the driving forces for this movement?

In some zones around the Earth, the winds blow predominantly in one direction and this is known as the prevailing wind direction.  This direction can change with the seasons.  Winds over most areas are variable in direction from day to day.   A wind is named according to the point of the compass from which it blows, i.e., a wind blowing from the north is a north wind. 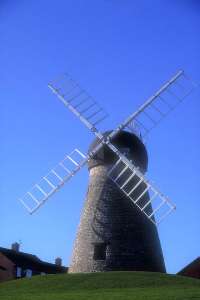 Energy from the Sun is the most important driving force for winds but there are other forces, which are also important:

2. In absence of other forces, air moves from high to low pressure due to the "pressure gradient force"

We know that winds are generated by differences in air pressure.  The greater the difference in pressure, the stronger the force.  The distance between the area of high pressure and the area of low pressure also determines how fast the moving air is accelerated. Meteorologists refer to the force that starts the wind flowing as the "pressure gradient force".

2. Gravity
— this causes vertical pressure differences.  The force of gravity is constant for a given altitude.

3. Coriolis Force
— once the wind begins blowing, the rotation of the Earth affects its direction. This is the Coriolis effect. 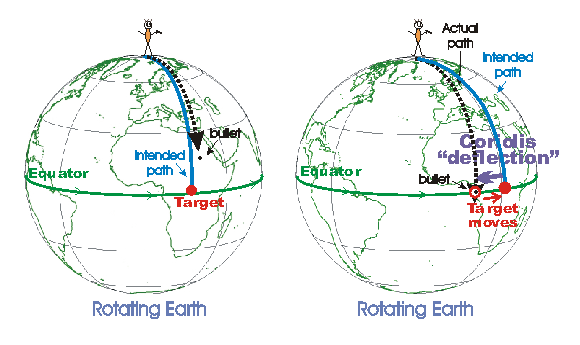 The Corolis effect results in the deflection of all objects to the right in the Northern hemisphere and to the left in the Southern hemisphere. The Coriolis force moves large objects such as airmasses considerable distances.   Small objects, for example ships at sea, are too small to experience significant deflections in their direction due to the Coriolis Force.

4. Friction
— this has very little effect on air in the atmosphere, but is more important close to the ground. The effect of friction on air motion decreases as the altitude increases to a point (usually 1-2 km above the ground) where it has no effect at all.  The layer of the atmosphere where friction affects atmospheric motion is referred to as the boundary layer.

4.  We experience centrifugal force when we ride on a merry-go-round, when we go round a curve in a car or when we make a sharp turn on a bike.

Water has a much greater heat capacity than land and, as a result, it warms up slower than the land and also cools down slower.   So during the day, there are significant temperature differences between a water body such as a lake or the sea and the surrounding ground.   This temperature difference causes pressure differences and, as a result, the development of local winds.  Close to the coast, these winds are known as the sea breeze.

A sea breeze develops on sunny days when the land becomes much warmer than the sea.  As the land warms up, the air above it expands and begins to rise. To replace the rising air, cooler air is drawn in from above the sea surface.

At night the water cools down slower than the land and the air circulation reverses and air moves from the land to the sea.  This is called a land breeze.

7. b) At night mountains cool down and cool air is pulled down by gravity.  In the morning, the coldest air is, therefore, often found within the valley. If the air is moist enough, valley fog may form.  Figure by Vera Schlanger.

So slope winds go up the mountains in the day and down during the night and the moving air has to be replaced with air from elsewhere.  A simplified picture of the air circulation is shown in Figure 8.  However, the air circulation in a typical valley is a bit more complicated than this! 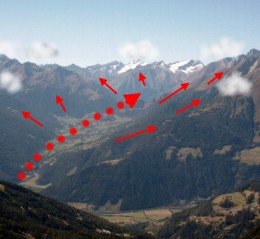 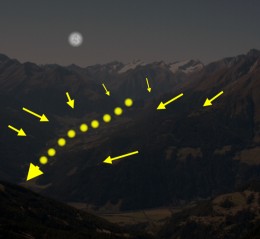 10. Local circulation during a valley breeze.

This local circulation scheme is a bit simplistic as mountains are not smooth and have many side valleys.
However, this schme gives a basic idea of the typical wind movements in mountainous areas.