El Niño is a large-scale ocean-atmosphere climate phenomenon in the tropical Pacific.  It represents the warm phase of the periodic warming of the sea-surface. It typically appears around Christmas time (and this is why it is called El Niño, as this is Spanish for the 'Christ Child').  It can last for up to a year. 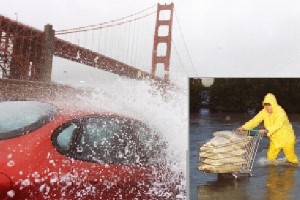 1. Flood in San Francisco. During the winter of 1997/98, wind-driven waves and abnormally high sea levels significantly contributed to hundreds of millions of dollars in flood and storm damage in the San Francisco Bay region. Recent analyses by U.S. Geological Survey (USGS) scientists of nearly 100 years of sea-level records collected near the Golden Gate Bridge found that these abnormally high sea levels were the direct result of that year’s El Niño atmospheric phenomenon.
from: USGS Fact Sheet 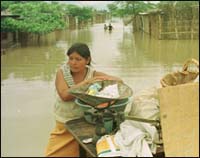 2. More than 35,000 people have been evacuated and nearly 7,000 people remain isolated by the flooding of the Paraguay river. Abnormally heavy rains associated with the El Nio phenomenon have caused flooding affecting 60,000 people in Paraguay's capital , Asuncion, and the provinces of Concepcion, Alberdi, San Pedro, Presidente Hayes and Alto Paraguay.
from: UNDP Desaster Protection, 1998 Jan, 8th

LIMA, 2002 May 9 (AlertNet) - In April, the normally calm Piura River turned overnight into a raging torrent. More than 3,500 families in northern Peru escaped but lost their homes and livelihoods. Scientists disagreed over whether the dramatic weather was connected to the climate phenomenon El Niño.
from: Reuters alert net

The warm ocean current which flows during El Niño influences the weather around the globe. El Niño events cause increased rainfall, flooding and storms, but also drought and sometimes devastating fires.

During non-El Niño conditions, the sea surface temperature (SST) in the tropical Pacific is between 6 and 8 oC higher in the west than in the east. This temperature difference is caused mainly by the easterly trade winds.  These blow warm surface water across the tropical Pacific from east to west.  The surface water gets progressively warmer as it moves west because it is exposed to longer solar heating. 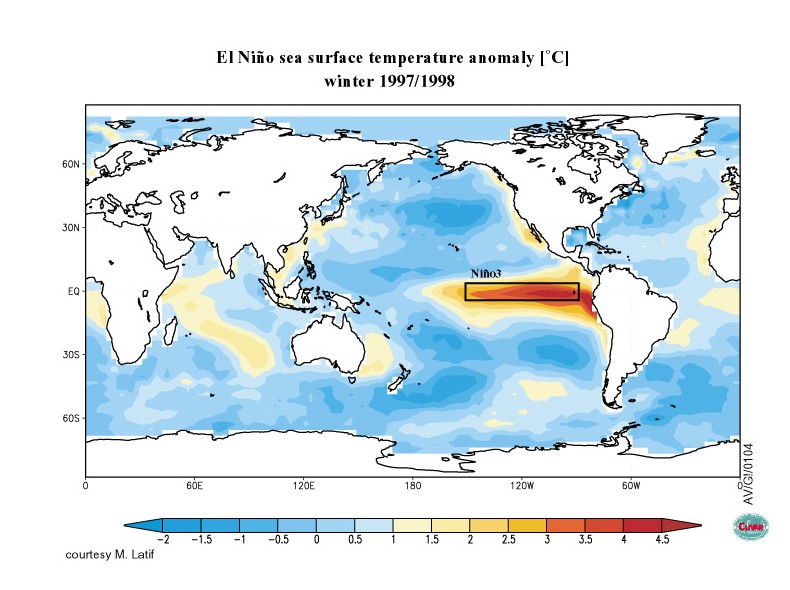 3. Sea surface temperature anomaly.  Please click on the picture to see a larger view of the sea surface temperature anomaly during an El Niño event. The picture does not show the ocean temperature but rather shows how much  warmer (in red) or how much cooler (in blue) the sea is during El Niño compared to its normal state.  West of South America in front of the Peruvian coast, the water is a lot warmer than normal.  © clivar.org / Mojib Latif, MPI Hamburg 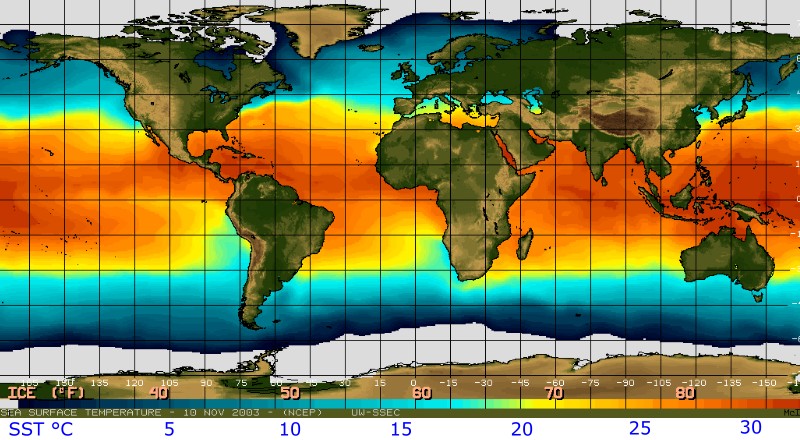 The wind blows the seawater west and, as a result, the sea surface is about half a metre higher at Indonesia than at Ecuador.  Because of this difference in seasurface height, water is upwelled from deeper in the ocean in the east to reduce the disparity in height (Figure 5a.).  This cool, nutrient-rich sea water is very important in terms of fishing.

5 a)  3-D model of the Pacific Ocean with the South American continent on the right and Australia on the left.  This shows the normal conditions in the Pacific.

During El Niño years, weakened winds reduce the flow of water from the east to the west and less nutrient rich cold deep water is upwelled to the surface along the South American coast.  So surface waters are warmer than normal but also contain less nutrients.  As a result, a dramatic reduction in marine fish and plant life is seen during El Niño events.  More importantly, the warmer than normal water makes the atmosphere unstable and the accompanying circulation changes cause changes in rainfall and weather around the globe.

5  b) El Niño conditions in the Pacific
source: http://www.pmel.noaa.gov

Compared to El Niño, La Niña (the female child) events are characterised by cooler than normal sea-surface temperatures in the central and eastern tropical Pacific Ocean.

During La Niña, the easterly trade winds strengthen and upwelling of cold deep water along the equator and the west coast of South America intensifies. Sea-surface temperatures drop as much as 4 oC below normal. The event also called anti-El Niño, or simply "a cold event" or "a cold episode". La Niña conditions make the atmosphere very stable and tend to cause  opposite climatic effects to El Niño.

La Niña events do not negatively affect fisheries in the same way as El Niño events and so are less well known.  However, both affect global climate.

The global impacts of El Niño and La Niña

The impacts of El Niño and La Niña are seen mostly in the Pacific Ocean and along the Equator.  Their effects on temperature and rainfall are roughly opposite and are shown in the figures below.

6. a)  El Niño changes the weather conditions nearly everywhere on the world and lead to severe problems in some regions. Source: NOAA. 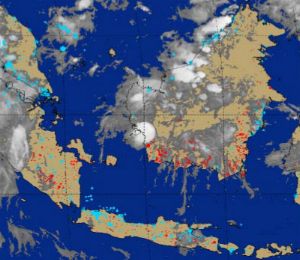 In the tropics, the eastward shift of thunderstorm activity from Indonesia into the central Pacific during warm episodes results in abnormally dry conditions over northern Australia, Indonesia and the Philippines in both seasons. Drier than normal conditions are also observed over southeastern Africa and northern Brazil during the northern winter season. During the northern summer season, Indian monsoon rainfall tends to be less than normal, especially in northwest India where crops are adversely affected. Wetter than normal conditions during warm episodes are observed along the west coast of tropical South America and at subtropical latitudes of North America and South America.

During a warm episode winter, mid-latitude low pressure systems tend to be more vigorous than normal in the eastern North Pacific. These systems pump abnormally warm air into western Canada, Alaska and the extreme north of the United States. Storms also tend to be more vigorous in the Gulf of Mexico and along the southeast coast of the United States resulting in wetter than normal conditions in that region.

No clear impact has been detected in Europe. This does not mean that El Niño and La Niña do not influence the weather in Europe, but does that the influence is not very strong.