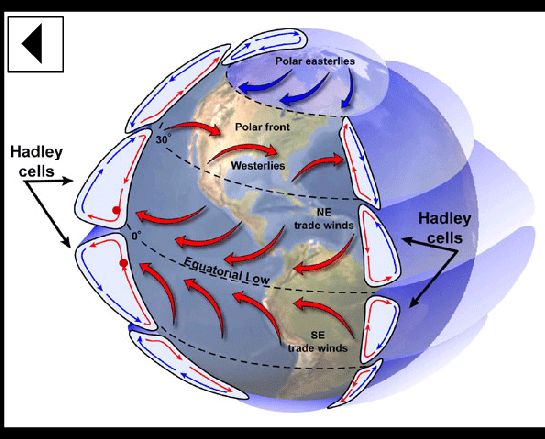 This figure shows the atmospheric circulation patterns which give rise to the major bands of high and low pressure around the Earth.

The pressure cells between the equator and 30°N and 30°S are known as Hadley Cells after George Hadley who suggested their existence way back in 1735.

These cells transport heat from the equator to the colder temperate and polar regions of the Earth.

Temperature in the tropical region is high throughout the year.
The annual distribution of rainfall varies greatly throughout the globe.  Near the equator, it rains heavily all year and rainfall amounts can be three times greater than the amounts we see in Europe.

Large amounts of solar radiation at the equator warms the moist air at the surface. This warm air rises into the atmosphere and, as it rises, it cools.  As the air cools, it can no longer hold as much water vapour and the water condenses out and forms big towers of clouds.  This process often results in daily thunderstorms.  As the warm air rises, the pressure at the ground decreases.  This process occurs all around the equatorial region. This is why an area of low pressure is seen in this region and it is known as the equatorial low pressure belt.

At higher altitudes the rising air drifts towards the North and towards the South and cools.  Close to the tropics (23.5 °N and 23.5 °S) the air is cold enough to sink to the ground.  This sinking air is very dry, all its water has been lost as rain over the equator.  The air warms up as it sinks towards the hot ground and this causes a hot high pressure region to form.  This high pressure belt is known as the horse latitudes or the subtropical calms.

These consistent winds are known as the trade winds. Sailors have used them for many years to help them cross the oceans.

This whole atmospheric circulation pattern is called a Hadley-Cell.

The winds from the south drift towards the left, those from the north drift to the right.  As  a result, the winds appear to come either from a northeastly or southeastly direction.
Do you believe this?

It is quite simple to simulate the effect of the rotation of the Earth:

You will need a globe (or a big water-melon, a ball or just a tomato).

Draw the equator and the northern and southern tropics onto the globe using a pen or some chalk.

Remember, the Earth rotates in an anti-clockwise direction looking from the north pole.

Start to rotate the Earth and, while it is rotating, draw the winds coming directly from the tropics to the equator.
Do the winds travel in a straight line or not?

Movies: Now watch these three movies on the experiment.

Attention:
If you cannot see anything, please install the

Microsoft Media Player (TM) or the

RealPlayer (TM) first.
If you have a slow modem it is better to save the file on your hard disk and run it later. If you have a fast connection, then just run the movie. 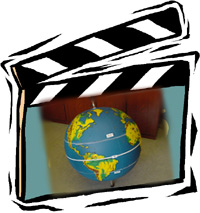 If the Earth didn't rotate, the winds would blow straight from the tropics to the equator.  But, as everyone knows, the Earth does rotate!  Watch the next two movies to see how the winds drift to the east and to the west.

This movie shows the effects of the Earth's rotation on the northern hemisphere. As you can see, the wind drifts and does not blow in a straight line.

This movie shows the effects of the Earth's rotation on the winds in the southern hemisphere.

Compare your lines on your globe with the films and with the picture.

Does this mean that all sailors meet at the equator? 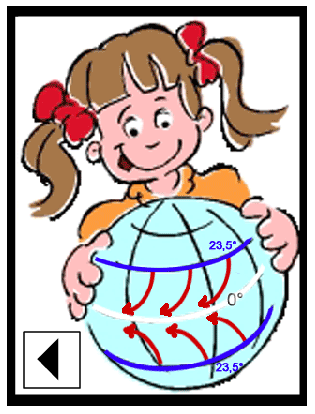