Most communities on Earth experience some kind of flooding event.

1. Flooding kills almost twice as many people each year in the USA as tornadoes and hurricanes put together.
source: http://www.erh.noaa.gov/
er/cae/svrwx/flood.htm

On the 14th of June 1990 in Shadyside, Ohio, USA, 101.6 mm of rain fell in less than two hours.  This produced a 9 m high wall of water.  Twenty six people died and about $7 million worth of damages occurred.

Flash floods occur within six hours of a rain event or after a dam bursts or a river embankment fails.  They can also occur when water is suddenly released from behind an ice or debris jam.  Flash floods often catch people unaware.  The best response to any signs of flash flooding is to move immediately and quickly to higher ground. 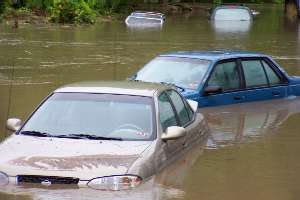 Intense rainfall during storms creates small, fast moving streams of water.  These streams of water can have enough power to wash away sections of pavement and parts of houses.  The lack of water permeable ground in urban environments makes the situation worse.  Urbanisation increases water runoff two to six times over what would occur on a natural terrain. During periods of urban flooding, streets can become swift moving rivers, while basements and underpasses can become death traps as they fill with water. 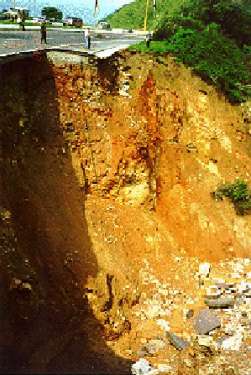 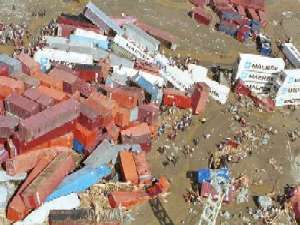 4. Unexpected torrential rains fell in the north of Venezuela from the 12th to the 16th December 1999.  These caused massive landslides and floods.

Several factors contribute to flooding. The two key elements are rainfall intensity and duration. Intensity is the rate of rainfall, and duration is how long the rain lasts. Topography, soil conditions and ground cover also play important roles. Most flash flooding is caused by slow-moving thunderstorms, thunderstorms repeatedly moving over the same area, or heavy rains from hurricanes and tropical storms.  Floods, on the other hand, can be slow- or fast-rising, but generally develop over a period of hours or days.

Flash floods are very dangerous. Only 15 cm of fast-moving water can sweep a person off their feet and cars become buoyant in about 61 cm of water.