The incident solar radiation, the distribution of the continents and the oceans, the rotation of the Earth and the land elevation all affect the climate.  Most of the solar radiation falls in the Equatorial region.  Just slightly to the north of the equator is a region of low winds known as the doldrums.  These occur between two windy regions where the trade winds blow. 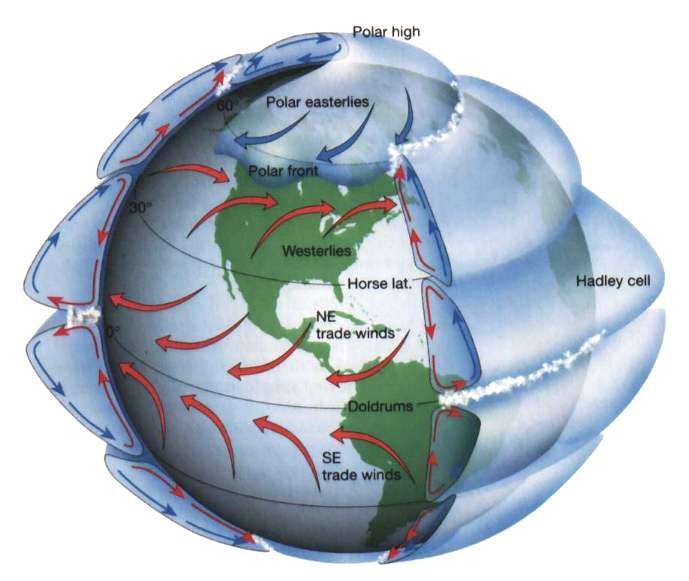 The large amount of solar radiation that arrives at the Earths surface around the Equator causes intense heating of the land and the ocean. This heating causes warm moist air to rise into the atmosphere leaving an area of low pressure underneath.  The region is also characterised by cloudiness, high humidity, light and variable winds and various forms of severe weather including thunderstorms and hurricanes.  The doldrums are also noted for calms, these are periods when the winds fall, trapping sailing boats for days.

The air that rises around the Equator descends around the so called horse latitudes.  These are two belts of latitude where the winds are light and the weather is hot and dry. They are located mostly over the oceans, at about 30° latitude in each hemisphere.  They have a north-south  is only about 5°

Once the descending air reaches the surface of the Earth, it spreads out towards the Equator as part of the prevailing trade winds or towards the poles as part of the westerlies.  This region in the northern hemisphere is sometimes called the ‘calms of Cancer’ and called the ‘calms of Capricorn’ in the southern hemisphere. The horse latitudes supposedly get their name from the days when Spanish sailing vessels transported horses to the West Indies. Ships would often become becalmed in mid-ocean at this latitude, thus severely prolonging the voyage.  The resulting water shortages would make it necessary for crews to throw their horses overboard.

The air at doldrums rises high over the Earth, recirculates poleward, and sinks back toward the Earth’s surface at the horse latitudes.  Surface air from the horse latitudes that moves back towards the equator is deflected by the Coriolis Force.  This causes the winds to blow from the north-east in the northern hemisphere and from the south-east in the southern hemispehre.  These winds are known as the trade winds.  In both hemispheres, therefore, these winds tend to blow from the east to the west and towards the equator.  Sometimes the trade winds are just called "easterlies" to avoid having to specify the hemisphere. These steady winds are called the trade winds because they provided trade ships with an ocean route to the New World. 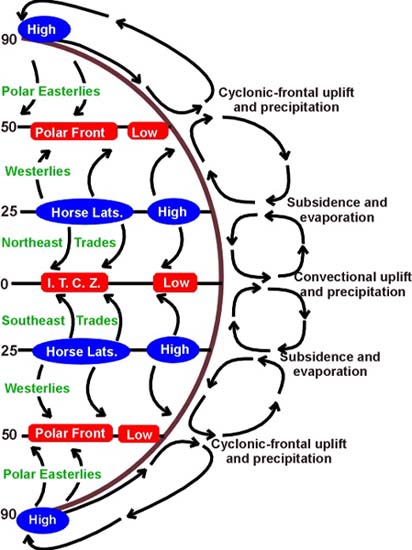 A monsoon circulation is determined by the different heat capacity characteristics of continents and oceans.  They are similar to sea and land breezes but occur over much larger areas.  In summer, the winds usually flow from the water to the land, causing heavy rains inland. In winter, the winds usually reverse and the wind flows from the land to the sea resulting in dry conditions. 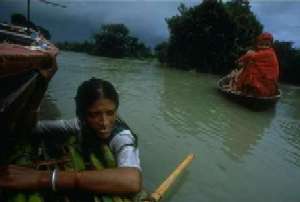 3. Effect in the Indian sub-continent - Monsoon

The word "monsoon" is derived from the Arabic word "mausim" which means season. Ancient traders sailing in the Indian Ocean and adjoining Arabian Sea used it to describe a system of alternating winds, which blow persistently from the northeast during the northern winter and from the opposite direction, the southwest, during the northern summer. Thus the term monsoon actually refers solely to a seasonal wind shift and not to precipitation.

Even though the term monsoon was originally defined for the Indian subcontinent, monsoon circulations exist in other locations of the world as well, such as in Europe, Africa, Australia, and the west coasts of Chile and the United States. Approximately 65 % of the world’s population lives within monsoon regions. The most famous monsoon circulation occurs over India and southeast Asia. During the summer, the air over the continent becomes much warmer than the water surface, so the surface air moves from the water to the land. The humid air from the water converges with dry air from over the continent and produces precipitation over the region. Additional lifting from hills and mountains causes copious amounts of precipitation to occur, over 10,000mm annually at some locations! During the winter the flow reverses and the dominant surface flow moves from the land to the water.

The Indian summer monsoon typically lasts from June through September. During this period large areas of western and central India receive more than 90% of their total annual rainfall, while southern and northwestern India receive 50%-75% of their total annual rainfall. Overall, monthly rainfall totals average 200-300 mm, with the largest values observed during the heart of the monsoon season in July and August.

Rainfall across southeastern Asia is also monsoonal in nature, with the largest totals typically observed during May-September. Area-average totals normally reach 200 mm in each of these months, with seasonal totals of 1000 mm commonly observed.