More about weather and human health

People have, since ancient times, associated certain weather conditions with ill health.  The connection between weather and health is made especially clear when skin cancer rates increase and during heat waves or extreme cold snaps when old people are much more at risk of death.

Illness resulting from temperature extremes and solar ultra-violet radiation are obvious effects of weather on health.  Effects which are not so obvious include the influence of weather on our mood, behaviour and general well-being.

Researchers realised that medical conditions alone could not explain all illnesses and a new science called Biometeorology was created.  This is a combination of many science disciplines, mainly meteorology, medicine and biology.   Our gradual detachment from nature and our modern lifestyle, with air conditioners, humidifiers and heaters has made us more sensitive to environmental influences. This is particularly valid when the body is weakened by illness or old age.

Our bodies react to cold by constricting the blood vessels in our skin and around the edges of our body.  As a result, our heart has to work harder to squeeze blood through the narrow vessels.  This puts a lot of strain on a damaged or weakened heart.  A significant drop in air pressure causes the air in our isolated body cavities and our membrane fluids to expand.  This puts pressure on inflammed or injured tissues in joints or muscles and causes us increased pain.  Some people experience this phenomenon when they travel by aeroplane when the cabin pressure drops during take off.   Many of us are sensitive to changes in weather and the pain we feel may be caused by the irritation of nerve endings as a result of rapid changes in conditions.  Bones and muscles have different densities and unequal expansion and contraction during temperature and humidity variations may increase the pain we feel in inflamed or injured joints and muscles.

2. Boiling water tossed into air at a temperature of -18 oC on December 25 2000.
Photo by Dan Lipinski.  Source: http://www.crh.noaa.gov/ with permission.

Heat waves appear to have a greater impact on mortality than cold episodes.  In the summer of 2003, 180 people died in Paris, France on one day alone as a result of the abnormally high temperatures.

Humidity has an important impact on mortality.  The more humid it is, the harder it is for our bodies to loose heat by sweating, and this results in further overheating. 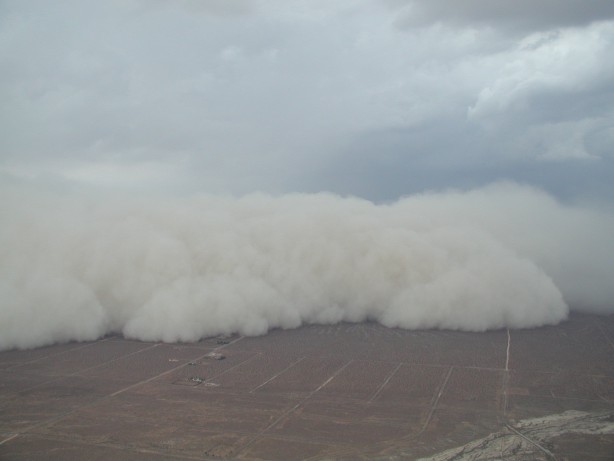 Weather-sensitive people often become irritated a day or two before a change in weather and are often miserable when a weather front arrives. Hospital records in the USA show that a greater number of babies are born during this time and headaches and migraines increase.  People suffering from rheumatism dread the arrival of cold and damp weather and the dry and dusty inland wind prior to the arrival of a front triggers asthma or aggravates the symptoms and worsens hay-fever.

Inland dry winds before fronts are called Foehn in the Alpine regions of Central Europe and Chinook and Santa Ana in the Rocky mountain regions of Canada and the USA.  Some Swiss courts even allow the negative effects of these winds to be used as a mitigating factor in some crimes. The University of Calgary in Canada has substantiated the claims of many migraine sufferers that the Chinook is their main trigger.

Electrical storms also have an impact on our health. A lightning bolt announces its presence by sending out electromagnetic signals, sferics (short for atmospherics), at the speed of light. Instruments can measure these hundreds of kilometres away.