Nutrients and the problems of eutrophication in coastal waters

Nutrients and the problems of eutrophication in coastal waters

More than 60% of the world's population lives within 100 kilometers of the coast and future population growth in the coastal region is predicted to be greater than anywhere else on Earth. We not only use the coast as a place to live but also for commercial activities such as mineral extraction, disposal of waste products such as sewage and industrial waste, fishing and tourism. Large populations and high levels of industrial activity mean that in some coastal areas human activity has damaged natural ecosystems.

Eutrophication is defined simply as 'enhanced phytoplankton growth due excess supply of nutrients'.

So what are the problems associated with eutrophication?

1. High concentrations of nutrients may lead to large phytoplankton blooms. These blooms occur throughout the water and prevent light reaching the waters below. This stops the growth of plants deeper in the water and reduces biological diversity. Photograph from NOAA. 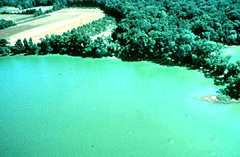 2. When phytoplankton die they are remineralised (eaten) by bacteria. This process uses up oxygen in the water. When the blooms are really large, this bacterial decomposition can use up so much oxygen in the deep waters that there isn't enough left for fish to breathe and they have to swim away or else they die. Animals living on the sea floor can't easily move away and they also die. The European Union is the third most important fishing power in the world so maintaining the health of European coastal waters is economically very important. 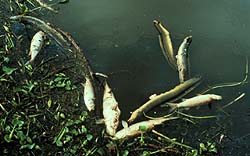 3. Excess nutrients can sometimes encourage the growth of phytoplankton species which produce harmful toxins. These toxins may cause the death of other species including fish in fish farms. Shellfish become accumulate the toxin when they eat the phytoplankton and these toxins can then be passed to humans when we eat the shellfish. Shellfish poisoning generally causes upset stomachs but in rare cases it causes respiratory arrest and can therefore be life threatening. The picture shows a notice on a beach warning people not to eat the shellfish because they are contaminated with paralytic shellfish toxin. Photograph from NOAA.

4. Large phytoplankton blooms can cause huge ugly foams on beaches. These blooms are not toxic but temporarily ruin the beach, reducing its recreational value. The income from tourism in areas badly affected by these blooms is low. Picture courtesy of the European Union. 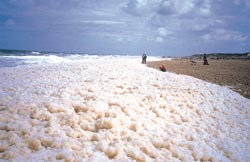 Eutrophication can, therefore, be economically very costly and steps are being taken to reduce nutrient inputs to coastal waters. Intergovernmental organisations have agreed that we should halve nutrient inputs to waters around the North Sea and the Baltic Sea based on 1985 input values. If we achieve this, computer models suggest we should have healthy coastal waters by 2010.

What have we achieved in Europe so far?

European directives on the treatment of sewage and use of phosphate free detergents have led to reductions in the inputs of phosphorous into our rivers and seas. However phosphorous concentrations are still high in coastal waters and it appears that phosphorous stored in sediments from earlier inputs is now slowly being released back into the water. Nitrate based fertiliser use has declined in Europe since the 1980's but nitrogen inputs to rivers from agricultural sources are still high.

Inputs to the atmosphere

Although there has been a general decline in emissions of air pollutants, levels of nitrogen oxides in the atmosphere are still high. Catalytic converters on new cars have reduced nitrogen oxide emissions but there has also been an increase in road travel which has partially offset the reductions in emissions per car. There has also been a decrease in ammonia emissions due to better management of animal wastes but we still have a long way to go to reach the targets which have already been set. One of the major problems with air pollution is that many species travel a long way from the place they are emitted to the place they are deposited. This may be in a different country, so we need European wide or even global action to reduce atmospheric inputs to coastal waters and this is politically difficult to achieve.

So we still have a way to go to reach the targets set by Intergovernmental Organisations such as The OSPAR Commission. By the time you read this, the situation may have changed. See if you can find the OSPAR web site and that of the European Environment Agency and find out how close we are to achieving our targets now.