Other climatically important gases from seawater - 1

Other climatically important gases from seawater - 1

A whole variety of different gases enter the atmosphere from seawater and many affect our climate. Some, like dimethyl sulphide, are produced during phytoplankton growth. Others are produced when sunlight reacts with organic (carbon based) compounds found in the surface waters of the oceans. Many of these organic compounds come originally from phytoplankton. Here we look at some of the gases which affect the troposphere, the lower layer of our atmosphere.

Halocarbons are a group of simple organic (carbon based) compounds which contain halogen atoms. Halogen is the special name for Group VII of the Periodic Table of the Elements which includes chlorine, bromine and iodine. Halogens are very important constitents of seawater. In fact the word haline, which is used to mean saltiness, comes from the word halogen. Chlorine as its charged anion, chloride (Cl-), is the most abundant chemical species (other than water!!) in seawater.

One of the most important marine derived halocarbons is methyl iodide which has the chemical formula CH3I.

Where do marine halocarbons come from?

Halocarbons are produced in seawater by biological processes and by sunlight. Methyl iodide is produced by some species of seaweeds and by a few species of phytoplankton but we're not really sure why they produce the compound. There is also evidence that methyl iodide is produced by the action of sunlight on iodine-containing organic matter and, in the open ocean, this may be the most important source. Once produced, a small proportion of halocarbons escapes from seawater into the air. 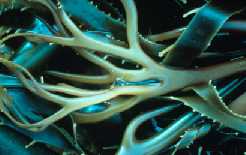 1. Photograph of seaweeds. Image from NOAA.

Why are halocarbons important?

Many iodine and bromine containing halocarbons can be broken down by sunlight in the troposphere (the lower layer of the atmosphere) to form very reactive halogen radicals. In this way they differ from chlorofluorocarbons (CFC's) which are man-made halogen containing chemical compounds. CFC's can only be broken down to halogen radicals by ultra-violet radiation in the stratosphere (the upper atmosphere).

Halogen radicals are extremely reactive and one of their most important reactions is the destruction of ozone (O3). In the troposphere, ozone is harmful to human health and also acts as a very strong greenhouse gas (responsible for about 15% of the enhanced greenhouse effect). So the emission of halocarbons from the sea may lower tropospheric ozone levels and reduce global warming. However lowering ozone amounts also reduces the concentration of hydroxyl (OH) radicals in the troposphere. Because these hydroxyl radicals clean the air of harmful chemicals, lower levels of them may reduce air quality.

2. Cartoon of the marine iodine cycle showing the major sources of methyl iodide in seawater, the transfer of iodine to the air and the role of iodine in ozone removal. It also shows the very important movement of iodine from the ocean to the land which helps prevent human health problems. Author: Lucinda Spokes, based on an idea by Dr. Alex Baker, University of East Anglia, Norwich.

Transfer of iodine from the oceans to the land is an extremely important part of the global iodine cycle. This source of iodine is critical to human health. If iodine wasn't transferred from sea to land, humans would suffer much more widely from brain damage and from goitre which causes the thyroid gland to swell up.

Methane (the major component of natural gas) is a major greenhouse gas which comes from both natural and man-made sources. Rice paddies and intensive cattle farming are the biggest methane sources to the atmosphere but the ocean is a small natural source of the gas.

What is the source of this marine methane?

When oxygen concentrations in the water or the sediments are zero, bacteria produce methane when they eat organic matter. Estuaries, saltmarshes and coastal waters are responsible for about 75% of the total oceanic methane emissions.

Methane can also be produced by the action of heat and pressure on buried organic matter and there is a huge store of methane in ocean sediments which we use as our natural gas supply. Most of the methane released naturally from these sediments is used up by bacteria in the water before it reaches the air. 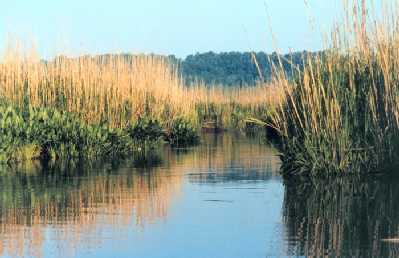 3. Saltmarshes are a very important methane source. Image from NOAA.

Why is methane important?

In the troposphere, methane is a major greenhouse gas (62 time more powerful than carbon dioxide over a 20 year timescale) and therefore contributes to global warming. In fact, it is responsible for about 15-20% of the enhanced greenhouse effect. It is also important in controlling the abundance of hydroxyl radicals. These radicals are responsible for cleaning the atmosphere of harmful chemicals. If methane levels rise, the concentration of OH radicals is likely to decrease. This reduces the ability of the atmosphere to clean itself.

One of the outcomes of eutrophication is lower levels of oxygen in the water. If eutrophication continues to be a problem in coastal waters, it is likely that the marine source of methane will rise.

One possible outcome of global warming is an increase in methane emissions from ocean sediments. If this happens, we're not sure at the moment whether bacteria will be able to cope with the rise in levels. So it's possible that the marine methane source will grow further in the future.

Hydrocarbons are a group of organic chemicals which are made up just of carbon and hydrogen and are used extensively as fuels. The simplest hydrocarbon is methane and this is discussed above. However, other hydrocarbons are also climatically important. The ocean is a small source of NMHC's to the atmosphere compared to land based sources. These are both natural and man-made and include plants, soils and fossil fuels.

Where do NMHC's come from?

In seawater, NMHC's are produced biologically and by the action of sunlight on organic matter. One of the most important NMHC's is isoprene (2, methyl buta-1, 3 diene H2C=C(CH3)CH=CH2). This compound is produced by both land plants and by all of the marine phytoplankton species we have studied so far. At the moment we don't know why plants produce isoprene, it may simply just be a by-product of photosynthesis.

Once NMHC's escape to the air they are highly reactive with ozone. In polluted air they contribute to ozone production whereas in clean air, such as that over the oceans, they destroy ozone. Reactions of NMHC's in the atmosphere are also important in controlling levels of hydroxyl radicals and so play a role in cleaning the air of harmful chemicals.