We cannot know for sure how these driving forces for climate change will look in the future – but we can guess. Scientists at IPCC have constructed four very different pictures of the future, or scenarios as they are also called, to represent changes in population size, wealth, use of energy sources and energy technology up to the year 2100. All four scenarios describe a possible future world:

A world with very rapid economic growth, low population growth and the rapid introduction and application of new and more effective technology.

A2 – a heterogeneous world

A world with a large gap between the rich and the poor, high rates of population growth, slow economic development, slow distribution of new technology with energy needs being met largely through fossil fuel resources.

B1 – a sustainable world

A world of rapid changes where concern for the environment will stimulate development of new technologies to avoid using fossil fuel resources. Where new technology is spread quickly and efforts are made to close the gap between rich and poor and create a more environmentally sound economy.

B2 – a technologically imbalanced world

A world with emphasis on local solutions for economic, social, and environmental sustainability where technology develops rapidly in some areas while other areas are forced to make do with outdated technology. 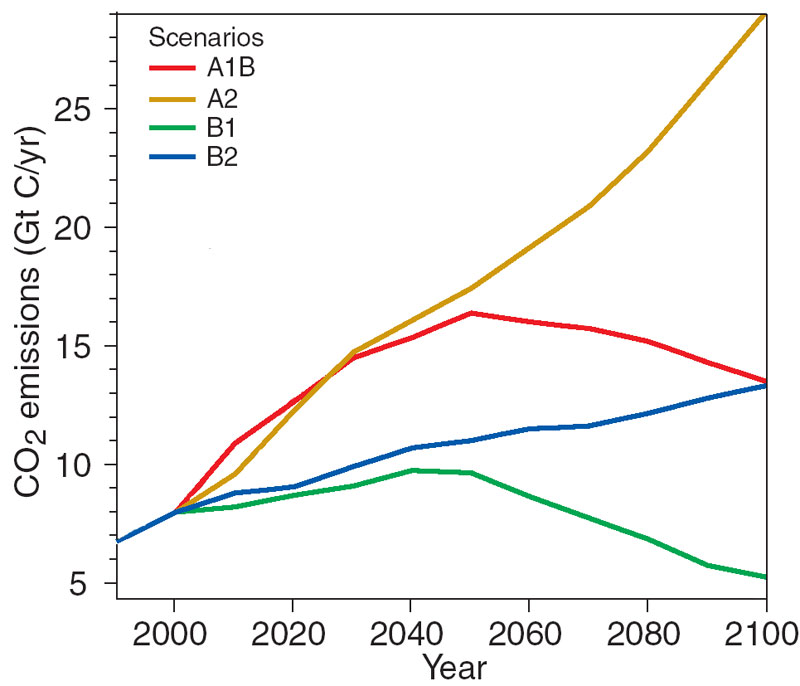 1. How CO2 emissions might develop over the coming century, according to four different scenarios.
Adapted from IPCC.

These scenarios are what the IPCC have used to come up with the figure of a temperature increase between 1.4 and 5.8°C by the year 2100. To ensure that all reasonable future developments have been taken into account, they have used about 40 variations of the four scenarios – where they made smaller changes in the demographics, economic growth or energy consumption estimates and used different economic models. The reason for the large difference between the highest and lowest temperature estimates is partly that there is some uncertainty about how exactly the climate system works, and partly that we cannot know precisely what the future holds in terms of social developments and emissions patterns. The IPCC says that for every emissions scenario there is a 40% chance that the temperature change will be greater than indicated, but only a 5% likelihood that it will be less.

These scenarios do not take into account the possibility of countries implementing new, comprehensive measures for reducing emissions of greenhouse gases. If that happens, then both the emissions and warming can be reduced.