In the summer of 2003 there was an enormous heatwave in the Northern Hemisphere. The heatwave affected much of Europe, causing forest fires and a large number of deaths across the Continent.

In Portugal the heatwave was the hottest and longest recorded ever. It fanned the country’s worst forest fires in more than 20 years.  An area almost as big as Luxembourg was destroyed and at least 15 people were killed in the blazes. 250 square kilometers of arable crop were burnt and 45,000 people either lost their job or their belongings. As a result, Portugal declared a state of national disaster.

On September 15th the newsmagazine Planetark (by Reuters) wrote:

LISBON - More than 1,000 firefighters battled to control forest blazes in Portugal at the weekend including two that blanketed the capital Lisbon in smoke.

"Things are very difficult when the firefighters put out fires and criminal hands light them," he said in remarks carried on private TSF radio. Durao Barroso vowed a complete investigation.

A spokesman for the National Emergency Operations Center said firefighters were trying to contain three blazes, including one in coastal mountains about 120 miles south of Lisbon. Fires in Loures, about 10 miles north of central Lisbon, and in Mafra, about 25 miles north of the capital, wreathed Lisbon in smoke by late afternoon.

Lisbon firefighters were flooded by hundreds of calls about the smoke, Lusa news agency reported.

"This is bad," said Jose da Silva Antunes, 65, as he peered through the eye-stinging haze that replaced Lisbon's normal late-summer sunshine.

"I've seen really thick smoke before, but nothing like this year."

The blazes have been fanned by heat that neared 99 degrees Fahrenheit in Lisbon on the weekend. The weather service forecast a slight drop in temperatures in coming days.

Fires have destroyed about 11 percent of Portugal's forests for the year through August 31, according to the Agriculture Ministry. At least 18 people have died in fires this year.

The following satellite picture from the Moderate Resolution Imaging Spectroradiometer (MODIS) on the Aqua satellite, was taken on August 4, 2003 and shows the fires which flared up between the morning and the afternoon on that day: 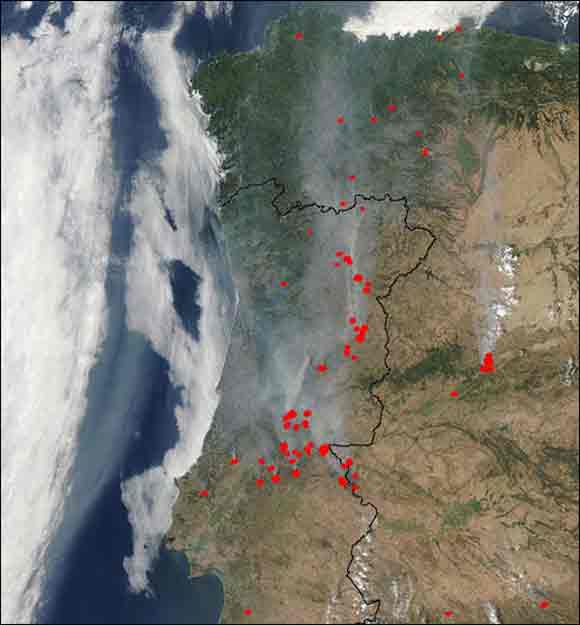 Who or what is the most probable reason for the disastrous forest fires? Discuss!

Forest fires swept through scenic woodlands along the French Riviera on the country’s Mediterranean coastline killing five people, destroying scenic forests and forcing thousands to evacuate the region. This image shows the Maures hills region along the coast of southeast France on July 28, 2003. A dark brown burn scar is evident to the northeast of the apex of the coastline, which is roughly centered in the image. Left of center (to the east of the lake) is the city of Marseille. 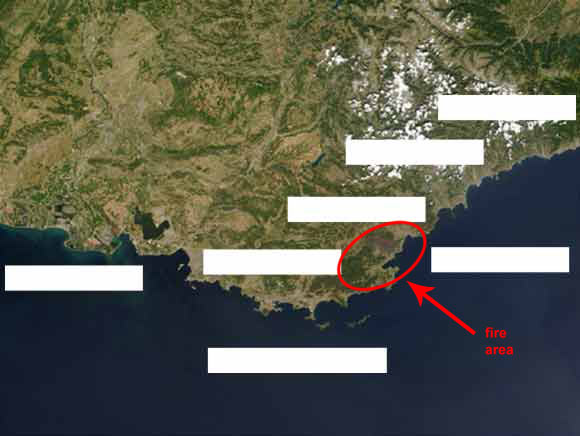 Mark the positions of the French Riviera, the Mediterranean coastline, Marseille, Nizza, Genova, Rhone and Cannes in the white spaces on the map.  Draw arrows from the names to their exact locations.

Record-setting heat plagued southern Italy in summer 2003 increasing the fire danger across the country. This image shows the numerous fires detected.  The fire centres are marked with red dots. Dust from the Sahara Desert hangs over the southwest part of the scene, softening the appearance of Tunisia , Sardinia and Sicily. 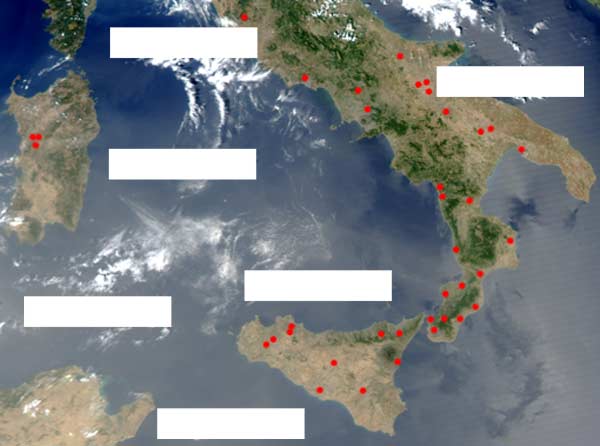 Mark the positions of the following places and countries on the map: Saharan desert, Tunisia, Sardinia, Italy, Corsica and Sicily.