Extreme meteorological events, whether related to the El Niño phenomenon, other large-scale forcing factors or simply the result of the chaotic nature of the climate system can have strongly detrimental effects on crop yields.

1. Energy exchange between vegetation and the atmosphere.   From Piker et al.  This diagram shows that plants interact with the surrounding air by absorbing energy and by emitting part of this energy as latent heat or through evapotranspiration.

Both direct and indirect temperature effects threaten crop yields. Plants in the early stages of development are especially vulnerable to extreme weather events

When the optimum range of temperature values for a crop in a particular region is exceeded, crops tend to respond negatively, resulting in a drop in yield. The optimum temperature varies for different crops.

Most crops are sensitive to episodes of high temperature. If air temperatures between 45 and 55oC persist for at least 30 minutes, direct damage to leaves almost always occurs.  Even lower temperatures (35 to 40oC) can be damaging if they persist for longer periods of time. Temperatures greater than 36oC cause corn pollen to lose viability, whilst temperatures around 20oC depress tuber initiation and bulking in potatoes.

The vulnerability of crops to damage caused by high temperatures varies with the plant developmental stage. High temperatures during reproductive development are particularly injurious - for example, to corn at tasseling, to soyabeans at flowering, and to wheat at grain filling. Soyabean is one crop which seem to be able to recover from heat stress, perhaps because it grows continuously.

Rain is the main source of soil moisture and the amount of rain is probably the most important factor determining the productivity of crops. While global climate models predict an overall increase in average global rainfall, their results also show the potential for changed hydrological regimes (either drier or wetter) in most places.

A change in climate can cause changes in total seasonal rainfall amounts. The water regime of crops is also vulnerable to a rise in the daily rate and seasonal pattern of evapotranspiration.  This can come about as as result of warmer temperatures, dryer air, or windier conditions. 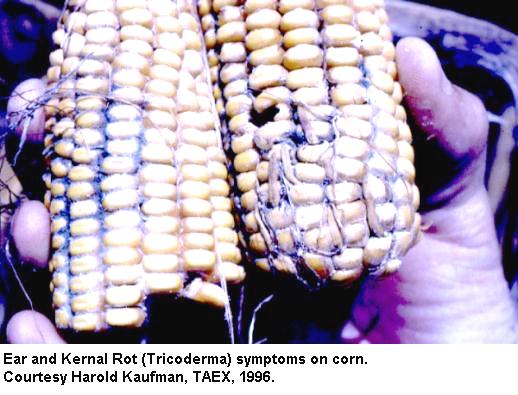 Droughts not only result from low rainfall but can also occur if less than average amounts of snow falls in the winter and higher temperatures cause the snow to melt early.  In arid regions these effects may reduce the amount of water in the rivers and therefore the amount of water available for irrigation during the growing season.  Periods of high relative humidity, frost, and hail can also affect the yield and quality of fruits and vegetables (especially corn and other grains).

Crop yields are most likely to suffer if dry periods occur during critical developmental stages such as reproduction. In most grain crops, flowering, pollination and grain-filling are especially sensitive to water stress. For example, the effects of drought can be minimised by early planting of cultivars with rapid rates of development and weed control can help to conserve moisture in the soil. 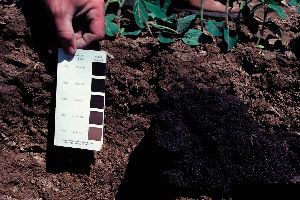 3. Measurement of soil moisture by comparing the soil colour with a test paper.
Photo by USDA NRCS.

Temperature stress and water stress often occur simultaneously, with one contributing to the other. These stresses are often accompanied by high light intensities and strong winds.  When crops are subjected to drought, they close their stomata to minimise water loss by transpiration.  This increases their internal temperature and this temperature rise can cause damage to the plant.

Excessively wet years, on the other hand, may cause crop yields to fall.  Waterlogged soils cause plant roots to rot and encourage pests.  Intense rain storms damage young plants and cause soil erosion.  The extent of crop damage depends on the length of time it rains, how long the fields are flooded, the developmental stage of the crop and the air and soil temperatures. 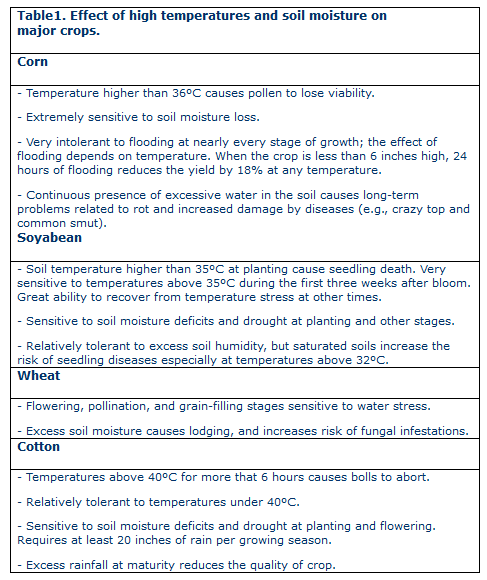