Emissions from the biosphere

Most of us live in towns or villages, in areas surrounded by industry and dominated by cars and other transport. In densely populated European countries it's difficult to imagine that it's plants, not humans, which emit most of the organic (carbon based) compounds into the air globally.

The biosphere is the part of the Earth where plants and animals live.

What is emitted by the biosphere?

Carbon is the most important element in the living world. Chemicals, made up mainly of carbon and hydrogen, are called organic compounds.  If you walk through a forest or a grassy area you smell many organic gases which are emitted by the trees, the grasses and the flowers.  World-wide, more than one thousand million tonnes of organic compounds are emitted by plants.  About half of this is a gas called isoprene.  Another important group are the monoterpenes (~130 million tonnes per year) which give pine trees their characteristic smell.  Plants emit these gases through their leaves and their needles, often in response to stress such as drought or high temperatures, but also during normal growth. 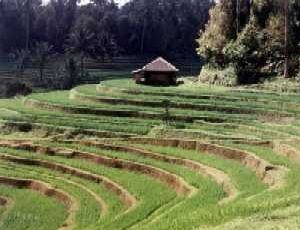 Methane (CH4) is the simplest organic compound and about 200 million tonnes of it are produced naturally each year.  Human activity roughly doubles this, with emissions from cows and rice paddies being important sources.

Organic compounds are also naturally emitted from the oceans.  Single celled marine plants, known as phytoplankton, produce organic compounds which can be released from seawater into the air.  One of the most important is dimethyl sulphide.  About 45 million tonnes of this sulphur containing gas enters the air each year.  Once in the air, it is converted to sulphuric acid and then to sulphate aerosol particles.  This sulphuric acid plays a part in governing how acidic the atmosphere is and the sulphate aerosols help form clouds.  So dimethyl sulphide is very important to our climate.

2. Global emissions of volatile organic compounds (VOC's) in millions of tonnes per year (methane and DMS not included).  The compounds are emitted by the oceans, soils, from trees and plants, by fires and from human sources.  Author: Jurgen Kesselmeier.

So if we want to understand how our climate system works and how it is likely to change in the future, it is important to look at emissions both from human activity and also from the biosphere.  Here we look at three examples to show just how important plant emissions are to our climate. 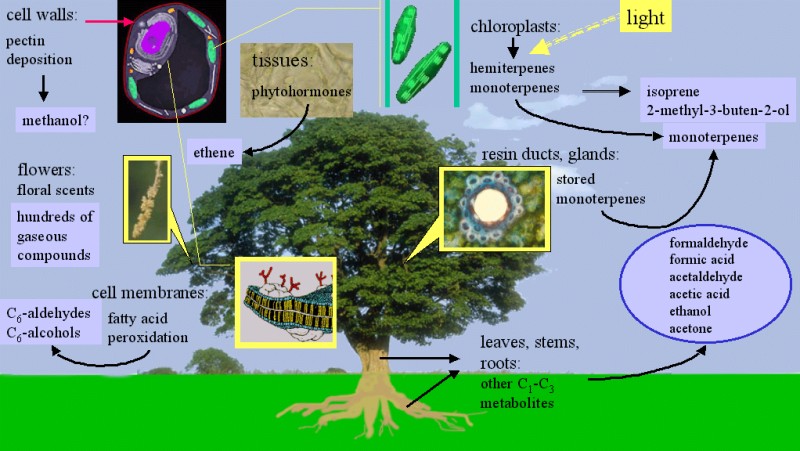 3. The tree as a source of organic compounds (after N. C. Hewitt; image Elmar Uherek).  Plants emit a huge number of different chemical compounds into the air.  Isoprene (emissions of around 500 million tonnes per year worldwide) and monoterpenes (emissions of 130 million tonnes per year worldwide) are the dominant species emitted. 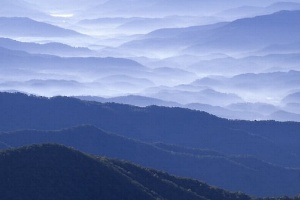 4.  Emissions of gases from trees and the conversion of these gases into fine aerosol particles is probably the cause of the blueish haze over the Great Smoky Mountains (USA).

Monoterpenes contribute to the smell of the forest and also to the smell of some fruits. They are made up of carbon and hydrogen and sometimes also contain oxygen.  Many of them have very descriptive names, for example, limonene and pinene.  They are produced most actively when the Sun rises on warm days and can either be stored or released directly into the air.  Production of the compounds rises if the plant is stressed. 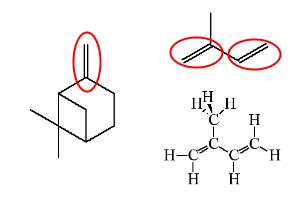 5. In this figure you can see the chemical structure of the monoterpene, beta-pinene (left), and of one of the most important natural organic compounds, isoprene (right).  Both compounds are unsaturated. This means, they have C=C double bonds, highlighted by a red loop.  In order to simplify complicated organic molecules, chemists ususally do not draw the C and H atoms. Isoprene is shown in both forms, without C and H atoms above and with C and H atoms below.

What happens to these compounds in the atmosphere?

Once they enter the atmosphere, monoterpenes react with hydroxyl radicals (OH) or ozone to form compounds which either deposit onto plants, the ground or react with other chemicals in the air to form aerosols (particles or liquid droplets in the air).  Sometimes it's possible to see these aerosols forming as the reactions occur.  The blue haze you see over forests is formed as aerosols are produced.  The picture opposite shows a laboratory simulation of this.  Some of the aerosols which are formed can act as cloud condensation nuclei and may start the formation of clouds. 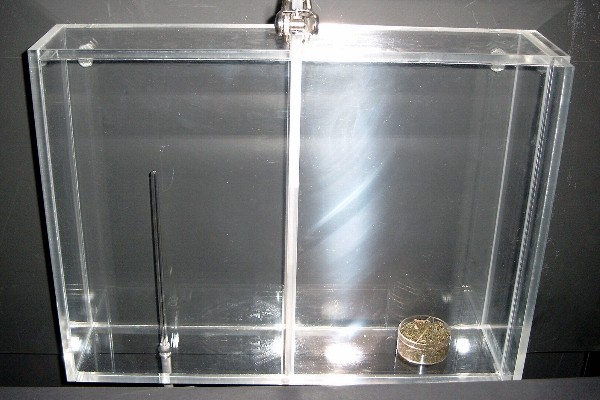 6. Simulation of  blue haze formation in the laboratory (carried out at MPI Mainz).  The beam of a strong lamp helps us to see the smoke formed when ozone comes into contact with monoterpenes from pine needles.

Nitrogen is an important chemical element in the biosphere since it's a fundamental component of proteins and DNA.  Plants take up the nitrogen they need from the ground (as nitrate or ammonium) and some bacteria help make nitrogen gas available to plants in a process known as nitrogen fixation.  Bacteria, however, also breakdown nitrate to form the gas nitrous oxide which is released into the air.  Nitrous oxide is extremely stable, isn't destroyed in the troposphere and, as a result, makes it all the way into the stratosphere, the next layer of our atmosphere.  In the stratosphere it plays a part in reactions which deplete the ozone layer.

Emissions of nitrous oxide have increased over time due to increasing use of fertilisers in agriculture.  Roughly 15 million tonnes are emitted world-wide each year. 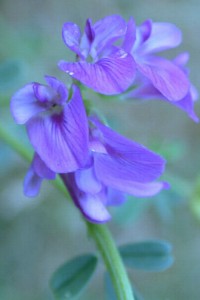 7. Medicago varia (Fabaceae).  This plant is used in agriculture to take up nitrogen from the air.
Photo: Patrick Knopf, spez. Botanik, Ruhr-Universität Bochum.

Tiny sulphate containing aerosol particles allow clouds to form over the oceans.  But where does this sulphate come from?  Phytoplankton produce sulphur containing compounds to help them survive the very salty conditions in the sea.  One of the by-products of this process is a gas called dimethyl sulphide.  This gas enters the atmosphere and, once in the air, it is converted into sulphuric acid and then to sulphate aerosols.

8. Visualisation of chlorophyll from phytoplankton.  The satellite image shows the Atlantic Ocean east of Canada.    The animation switches to a visualisaton of the phytoplankton in the sea (increasing numbers from blue to red).  Some of these phytoplankton emit dimethyl sulfide into the air.  Source: SEAWIFS Project.

So emissions from the biosphere are fundamentally important to our climate.

More information on how emissions of sulphur gases from phytoplankton affects climate can be found at:
Oceans - Basics - Unit 3 - Sulphur gases

Articles about the marine food chain and the role of sulphur compoudnds are published in
ACCENT Global Change Magazine - Edition No. 5 - January 2005