Fires are a natural part of life on Earth, occurring when there are droughts and lightning strikes.  These fires allow vegetation to naturally regenerate.  Nowadays most fires are, unfortunately, caused by humans particularly in the tropics.  When large areas of vegetation are burnt, we call the process biomass burning.

Fires started by humans are often the result of carelessness or even arson.  Many, however, are started deliberately so humans can use the land.  For example, large areas of the tropical rain forest have been burnt so that the land can be used for agriculture. 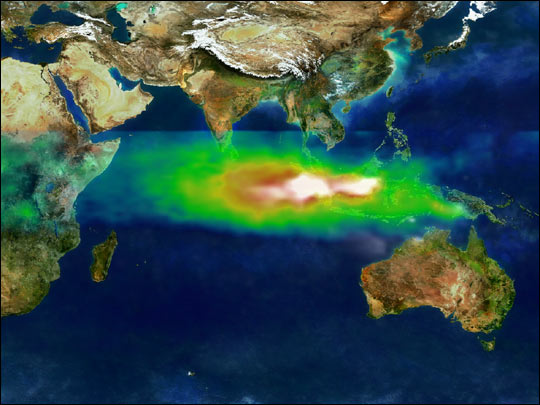 Huge fires destroyed vast areas of the Indonesian rain forest in 1997.  So much air pollution resulted from these fires that it could be seen by satellites in space.  The white colour in the image shows the smoke particles coming directly from the burning vegetation and the green, yellow and red colours show the tropospheric ozone which was also produced.  The ozone forms when hydrocarbons and nitrogen oxides (NO and NO2) produced by the fire react in the presence of sunlight.

So fires not only change the landscape, they also change the chemical composition of the air.

What is emitted by fires?

Many gases are emitted into the air when plants are burnt.  Some examples of these gases include:
carbon dioxide (CO2), carbon monoxide (CO), nitrogen oxides (NO + NO2 = NOx) and simple organic hydrocarbons with methane (CH4) the most abundant.

Particulate compounds are also formed.  These are dominated by organic carbon compounds and soot carbon. 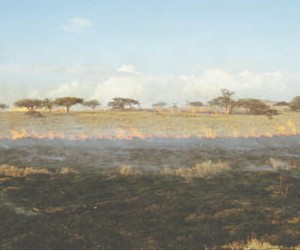 Biomass burning is an important contributor to the global atmospheric budgets of CO and NOx.   If old forests containing large amounts of vegetation are burnt, a lot of CO2 is emitted into the air.  Savannah (grassland) fires, on the other hand, can be an overall sink for CO2, since the soot carbon is partially stored as sediment on the ground and the fresh grass in the burned area takes up CO2 as it grows.

3. Sources of carbon monoxide (CO). Numbers are up to now difficult to estimate and have high uncertainties. Chart by Elmar Uherek.

The chart gives an overview of global sources for atmospheric carbon monoxide. CO is formed in chemical reactions in the air, primarily by oxidation of methane and other hydrocarbons. However, biomass burning dominates the global CO sources, and fossil fuel combustion is also a large contributor.
Other sources are the terrestrial biosphere. CO is formed in the degradation of plant material in soils. A minor amount of 10-20 Tg comes from the oceans.
If we consider all processes in the air it turns out that more than 50% of all CO emissions are related to human activities. Major amounts (natural or human made) are caused by fires.

But also about 20% of the global nitrogen oxide emissions are due to vegetation fires. Since NOx contributes to ozone formation, high ozone concentrations are often found in the plumes from fires.

When forests are converted into farmland, towns or roads humans destroy the original vegetation and cause an irreversible conversion of the organic plant material into carbon dioxide.  This type of land use change has occurred extensively in the rain forests in Africa and Brazil.  The photograph below shows a measurement station at Rodônia in Brazil. 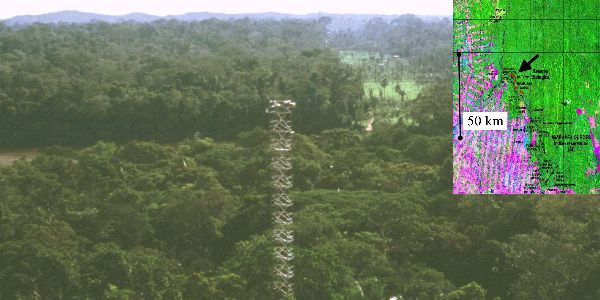 3. Photograph by Greg Roberts of a measurement site in the province of Rodônia in Brazil and an image of the region from space from the LANDSAT satellite.

The satellite picture opposite shows the location of the measurement site (marked with an arrow) in the south-central Amazon Basin.  A large road was built through the area in 1968 from which settlers and loggers started to clear the forest.  The extensive deforestation (in a typical "fishbone" pattern) is visible from satellite. 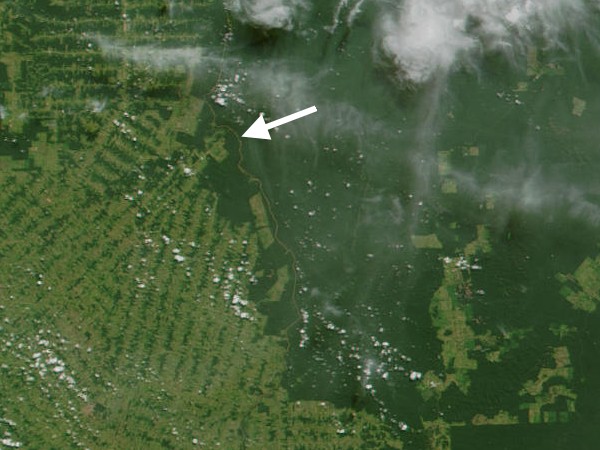 Biomass burning takes place during the dry season (in Brazil this is from June to November).  The photographs compare the situation during the wet season in May 1999 (top) and in September 1999.  The maps show the incidence of forest fires in Brazil in the different seasons.  The figure also shows aerosol samples collected in these months.  While filters collected in the wet season are usually clean after sampling, they are completely black from soot carbon and organic material in the fire season.  90% of the CO2 emissions from land use change are due to such forest fires. 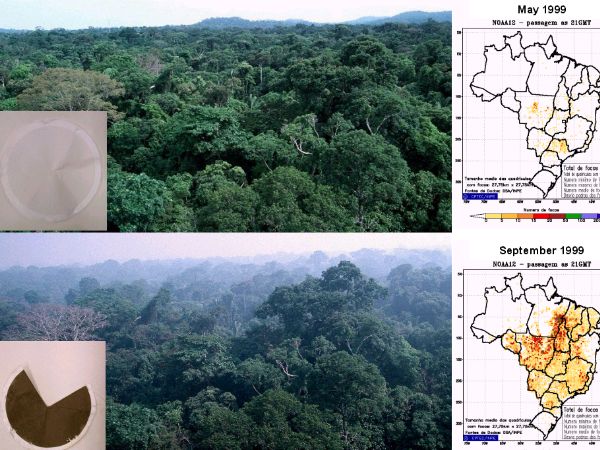 Cooking fires and fuels in African private households are topic of the
ACCENT Global Change Magazine - Edition No. 10 Sept. 2006