Ozone smog is a significant problem in big cities. Ozone is formed as part of a complicated process involving nitrogen oxides, ozone formation and ozone loss.  Ozone smog formation shows just how interconnected processes in the atmosphere really are. 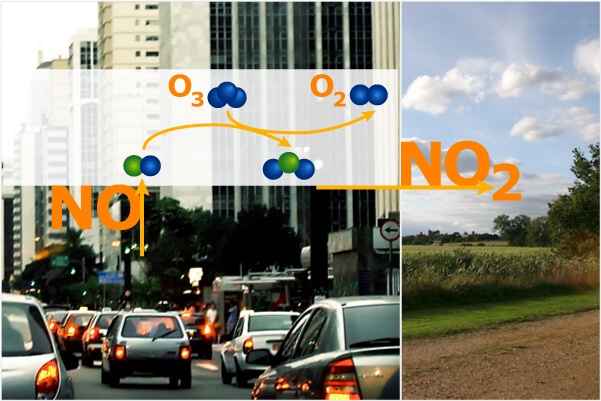 What happens in the city?

Lets make the example simple and assume almost all nitrogen oxides come from combustion processes happening in car engines.  Nitrogen monoxide (NO) rich air rises from the roads. This NO reacts with ozone (O3) already in the air to form nitrogen dioxide (NO2).  So the first part of the reaction cycle actually causes a loss of ozone from the atmosphere.  Indeed, directly over roads, ozone concentrations are often very low.  During ozone smog periods, ozone concentrations in cities can be lower than in the rural areas around.  The plumes of NOx rich air are then transported by the wind to the countryside.

An additional problem can arise from diesel cars equipped with particles filters. Although such filters prevent harmful particles in the exhaust gas, the cars often emit more nitrogen dioxide (NO2). At the moment (2008) there was not yet a common technology on the market preventing the emission of particles and NO2 in diesel cars in parallel.

Where do organic compounds come from? 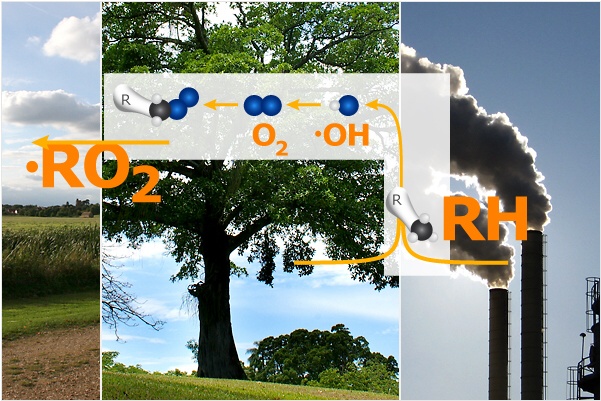 The second partner needed in the reaction cycle are organic peroxides. What are these and where do they come from? Organic molecules are emitted from forests and other plants but also from human sources (e.g. solvents or fuel at filling stations).  The structure of a few organic compounds, which are abbreviated as RH, are shown here. These compounds are chemically attacked in the air. The typical reaction favoured during the day is the reaction with the hydroxyl radical (OH) followed by addition of an oxygen molecule (O2). The result is a peroxy-radical (RO2), with R representing the unreactive organic part of the molecule.  Radical species have a spare electron which makes them very reactive.

When are the best conditions for ozone smog? 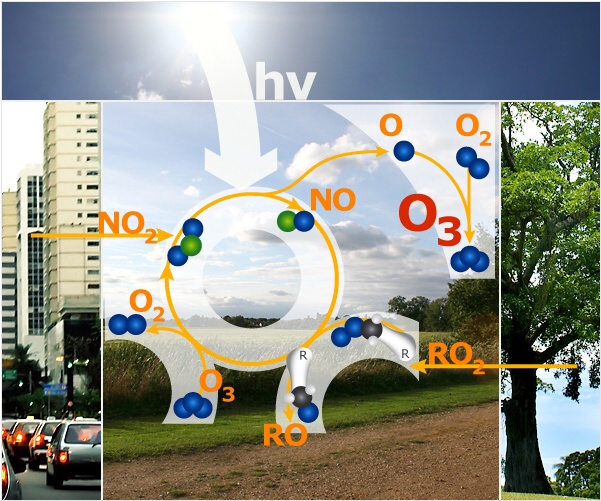 1) Nitrogen dioxide (NO2) is broken down by the Sun to form oxygen atoms (O) and nitrogen monoxide (NO).
2) The O atoms react with oxygen gas (O2) to form ozone (O3).
3) The NO reacts with peroxy radicals RO2 forming NO2 again.
4) Some O3 is removed by reaction with NO.  The amount lost depends on the concentration of the competing RO2 radicals.

In the end the peroxy radicals are lost and ozone is formed while the nitrogen oxides are always recycled. This cycle only happens if:

a) There is enough sunlight to breakdown NO2 into NO and O (the reaction happens on hot sunny days).
b) If the mixture of peroxy-radicals and nitrogen oxides favours the reaction. 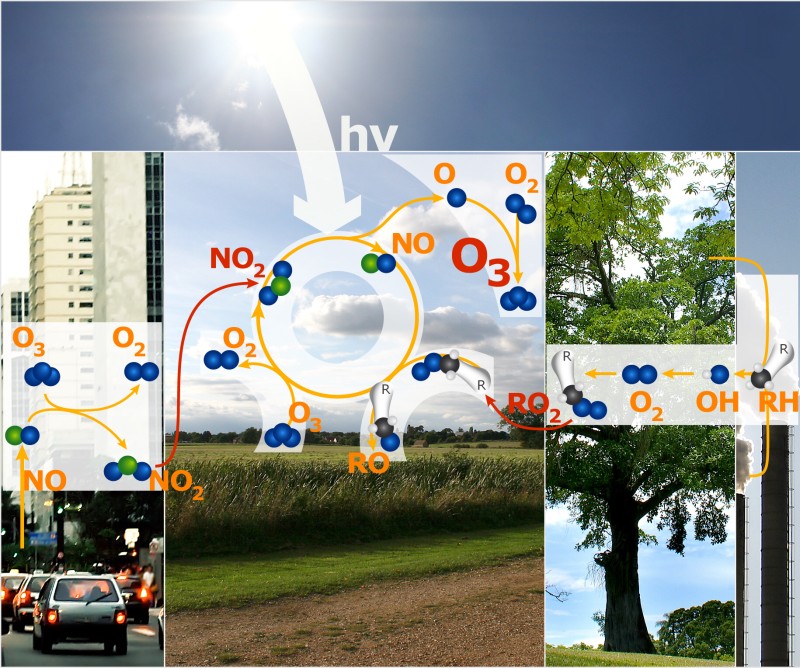 Nitrogen oxide concentrations are usually low enough to prevent severe ozone smog events occurring but if we continue to emit them during combustion processes, ozone smog events are likely to increase.  A comparable situation is seen in the smoke plume of a vegetation fire as the temperatures generated in these fires are hot enough to allow nitrogen oxide to form.