A city is built mainly of concrete, asphalt, bricks and stones.  As the air temperature in a certain place depends, to a large extent, on its surface characteristics, the temperature in a city is higher than in a non-urban area.  Large numbers of people and emission of heat further enhances this effect.

In many cities the air temperature is, on average, 0.5 to 0.8 oC higher than the surrounding non-urban areas.  In winter the average temperature difference is even greater, between 1.1 and 1.6 °C.   This phenomenon is called the urban heat island (UHI).  Lines on a map connecting points of the same temperature (isotherms) generally show a circular pattern with the temperature decreasing towards the city suburbs. 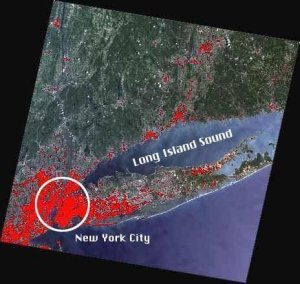 1. Heat Island map of the New York.  Please click on the picture to see the hottest surfaces, which are overlaided in red! (35 K).  Source: System for World Surveillance, Inc.

The number of inhabitants is a major factor controlling the development of the UHI.  In cities with populations between 500,000 and 1,000,000 people, air temperatures are usually 1.1 to 1.2 °C higher than surrounding non-urban areas.  For cities with more than a million people, the difference between urban and non-urban average temperatures increases to between 1.2 and 1.5 °C.  Maximum observed differences can be much higher and an example is shown in Figure 2. 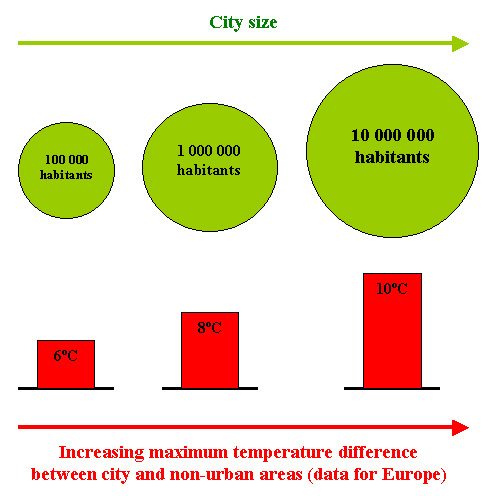 2. Dependence of the maximum intensity of the UHI on the number of inhabitants of a city.  Authors: Anita Bokwa, Pawel Jezioro.

The size and spatial structure of a city also govern the extent of the UHI.  Urban areas with low rise buildings spread among green areas do not form typical urban heat islands.  The UHI phenomenon is also closely related to the factors already discussed in the chapter "Factors controlling...", i.e. anthropogenic heat emission, air pollution and changes in the natural surface coverage. All these contribute towards the temperature rise in urban areas. Apart from its horizontal range, the UHI also has some vertical structure.  It usually reaches up to between 200 and 300 m into the air, about 3 to 5 times the height of the buildings.  In a cloudless sky it may reach up to 500 m into the atmosphere. Two distinct layer are seen:

1. the urban canopy layer occurs nearest the ground and results from heat emitted by low level emitters such as house chimneys,  from the buildings themselves (as they absorb lots of solar radiation and emit it back as heat) and also from vehicles.

2. the chimney layer occurs above the urban canopy layer.  Here the heat is emitted into the air from the high level emittors, e.g. the chimneys of power plants. The UHI causes changes in the urban climate compared to non-urban areas.  There are more hot days, less days with ground frost,  the growing season is longer, the amounts of rain are higher and cumulus clouds are noted more often.

The presence of an UHI has a negative impact on humans, particularly in summer, as it can cause overheating.  To counteract this, the number of parks and lakes should be increased in our cities.

The phenomenon of UHI is also closely related to the factors already discussed in:
Climate in cities - Basics - Unit 2 - What controls it?