Oxidation in the Atmosphere

Many chemical compounds are emitted into the atmosphere but removal processes prevent them accumulating in the air.  Species are removed by dry deposition of gases or particles or can be incorporated into rain and removed by wet deposition.  For gas phase organic chemicals, removal is easiest if they are first oxidised to a less volatile, water soluble form.

The three most important oxidising species in the air are: 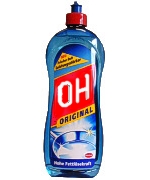 Hydroperoxy radicals (HO2) are also important and the sum of HO2 and OH is sometimes referred to as HOx.

The most important oxidising species is the hydroxyl radical (OH).  It is extremely reactive and able to oxidise most of the chemicals found in the troposphere.  The hydroxyl radical is therefore known as the 'detergent of the atmosphere'.

Only a few compounds in the troposphere do not react at all or react only very slowly with the hydroxyl radical.  These include the chlorofluorocarbons (CFC's), nitrous oxide (N2O) and carbon dioxide (CO2).  The rate of methane (CH4) oxidation by OH is also very slow, between 100 and 1000 times slower than other organic compounds.  This is why methane concentrations in the atmosphere can reach around 1800 ppn (1800 nmol mol-1), a value significantly higher than the concentrations of other organic trace gas concentrations present which are generally afew tens of ppb*.

2. Formation of OH: More than 97% of the O atoms which are formed by photolysis of ozone, react back again to ozone. Less than 3% start the formation of the most important radical in the atmosphere, OH.  If two molecules or atoms collide to form a product, a third species M is needed to take away some excess energy.  M (usually nitrogen N2) does not react itself.

How is OH formed?

OH governs atmospheric chemistry during the day since its formation depends on radiation from the Sun.  The initial reaction (shown above) involves the breakdown (photolysis) of ozone by solar radiation with wavelengths less than 310 nm. The oxygen atom (O) formed then reacts with water to form OH.  This reaction mechanism is why a small amount of ozone is essential in the troposphere.  Other sources of OH are:
the photolysis of nitrous acid (HONO), hydrogen peroxide (H2O2) or peroxy-methane (CH3OOH)
the reaction of nitrogen monoxide (NO) with the hydroperoxy radical (HO2) or the reaction of alkenes with ozone.
The scheme on the left shows how OH chemistry is fundamentally linked with the day-time reaction cycles of the nitrogen oxides. 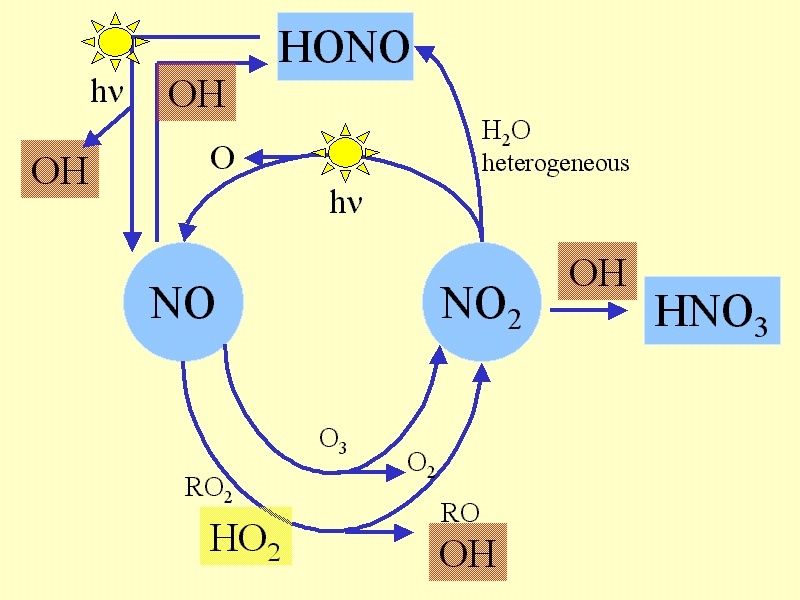 3. OH and the nitrogen oxide cycle
Scheme by Elmar Uherek

How much OH is formed?

Since OH is an extremely reactive radical it reacts as soon as it is formed. It's lifetime is less than a second. This means the concentration is extremely low, in the range of 1x105 to 2x107 molecules cm-3. At sea level pressure this is equivalent to a mixing ratio of 0.01 - 1 ppt (pmol/mol). Only one of 1000 billion to 100,000 billion molecules in the air is OH. Since it's formation depends on water vapour, the concentration of OH tends to decrease with altitude as the air becomes cooler and drier.

4. Zonal distribution of OH.  A pressure of 250 hPa is reached at roughly 11 km altitude (the tropopause in the mid latitudes).  Source: presentation by J. Lelieveld - MPI Mainz,  2003.

How does OH react?

The figure 5 shows low levels of OH near the ground over the tropical rainforest. Why is this the case?  Plants emit organic gases with isoprene being the most abundant.  This isoprene reacts with OH, removing it from the air, and forming  water and a reactive organic radical (R).  OH has a strong tendancy to remove (abstract) a hydrogen atom from organic species (RH) whenever possible.  The organic radical (R) then reacts with oxygen (O2) to form organic peroxides (RO2).  These compounds are an essential part of the ozone formation cycle. 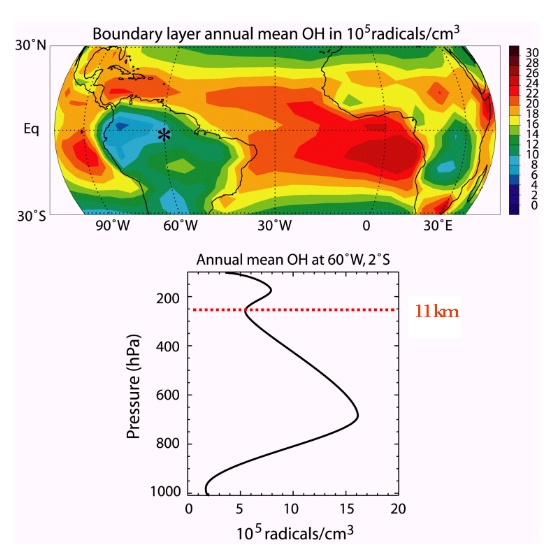 On a global scale, OH reacts primarily with carbon monoxide (40%) to form carbon dioxide.  Around 30% of the OH produced is removed from the atmosphere in reactions with organic compounds and 15% reacts with methane (CH4).  The remaining 15% reacts with ozone (O3), hydroperoxy radicals (HO2) and hydrogen gas (H2). 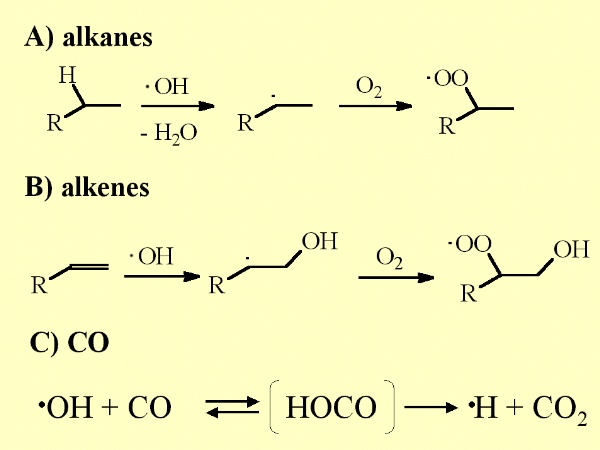 6. Important OH reactions in the troposphere.

The oxidation of carbon monoxide and methane by OH are very important as they are the major ways by which OH is removed from the atmosphere.  Reaction of OH with alkenes, a special class of organic compounds, is also very important as this reaction results in the formation of peroxides.

OH is the most important oxidant in the atmosphere.  However OH concentrations are close to zero during the night since sunlight is needed for its formation.  So during dark periods and during night-time, ozone and nitrate radical (NO3) chemistry become important. 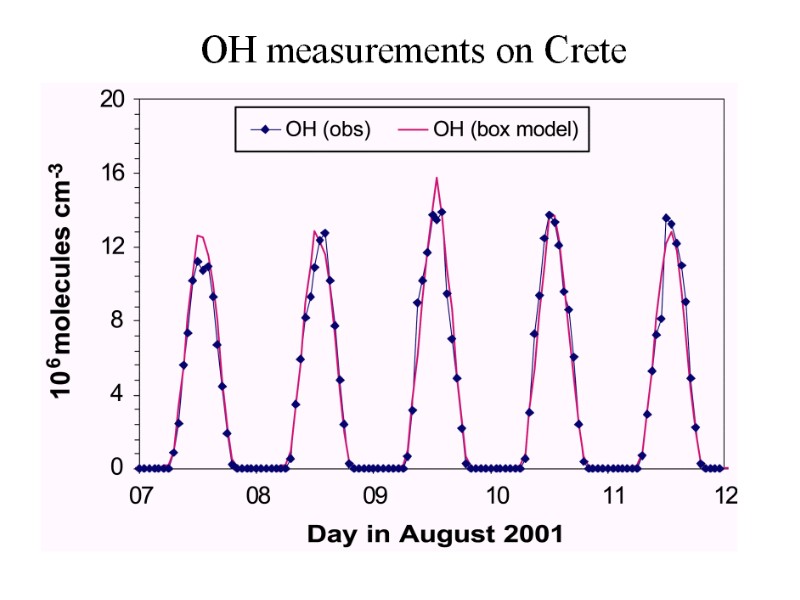 * The mixing ratio ppb (1 molecule in 1 billion molecules of air) or ppm (1 molecule in 1 million molecules of air) is often used in scientific publications as well as in other literature on the atmosphere and climate.  Because of this we use it here in the Climate Encyclopaedia.  However, the correct unit is 1 nmol mol-1 (equivalent to 1 ppb) or 1 µmol m-1 (for 1 ppm) since mole is the standard unit of concentration.