The chemistry of the atmosphere depends not only on the chemical compounds present in the air but also on the physical conditions.  These physical conditions depend, for example, on the season, whether it's day or night, what the temperature is and how humid the air is.

In the last section we saw that OH concentrations are highest during the day and approach zero at night when there is no sunlight present.  Temperature and other physical properties also show a diurnal or daily cycle.

Conditions close to the ground in the planetary boundary layer vary and do not always follow the general rule (e.g. of decreasing temperature with increasing altitude) because of interactions with the Earth's surface. A very typical example is the night-time inversion layer which collapses in the morning. 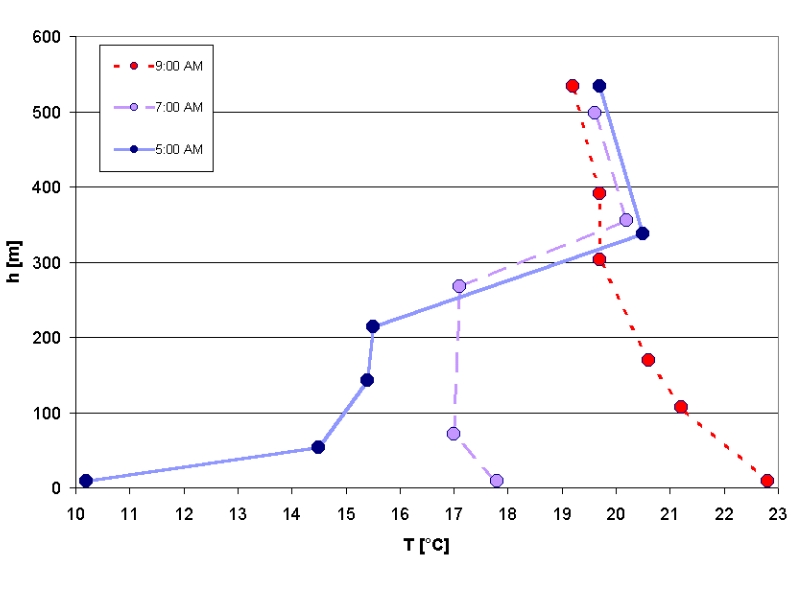 Everything below the free atmosphere (D) is part of our planetary boundary layer. Changes within the planetary boundary layer occur during the day and these are shown from the left to the right in the diagram.  At noon the air is well mixed (light blue). After sunset a stable nocturnal layer forms (A) and residual air remains above it (B). Air from the surface layer (below the dotted brown line) cannot go up to high altitudes during the night as there is no energy from the Sun to drive this movement. Air movement starts again as the Sun rises. The ground warms, air starts rising (red arrow) and the stable layers formed during the night collapse. A so called 'entrainment zone' rises up from ground to the top of the boundary layer (dark blue) and mixes the air (C). 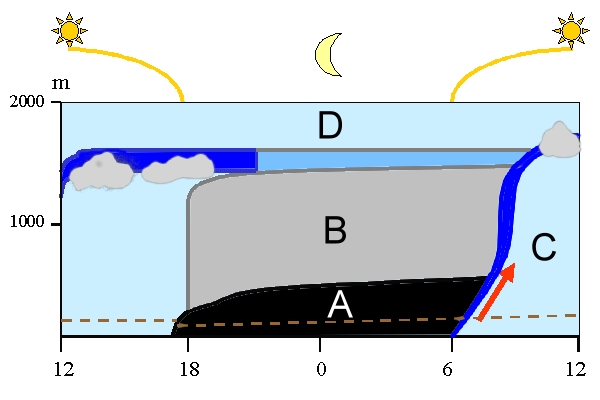 In the winter the Sun's energy isn't always strong enough to breakdown the inversion layer in the morning and the layer exists for the whole day or even for several days.  In these situations, pollution accumulates over the cities and leads to smog formation.  Similarly in mountain valleys, the inversion layer can be trapped below the cloud layer. 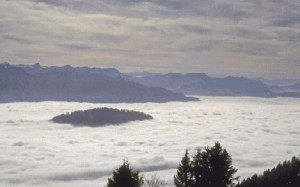 3. Inversion layer in winter in the mountains.  © Institute for Geographical Education, University of Erlangen-Nurnberg, Germany.

The chemistry of the night-time atmosphere is dominated by the nitrate radical (NO3).  These nitrate radicals are formed from the reaction of ozone (O3) with nitrogen dioxide (NO2).  The reaction of NO3 with NO2 is the only way to form dinitrogen pentoxide (N2O5) in the atmosphere. This N2O5 acts as a store of NO3.   It can either decompose back to NO3 and NO2 or react with water to form nitric acid (HNO3).

NO3 reacts with organic molecules in the same way as OH does.  It removes a hydrogen atom from alkanes to form an organic alkyl radical (R) which then reacts with O2 in the air to form peroxy radicals (RO2). 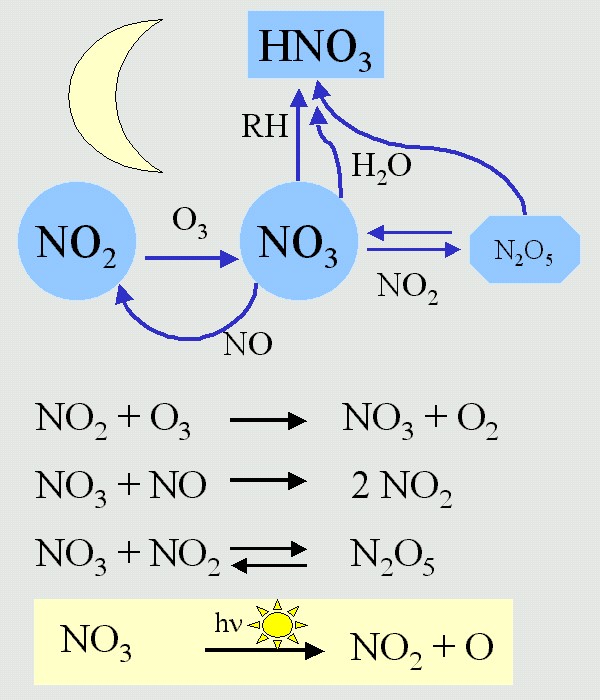 4. Important night-time reactions of the nitrate radical.  The radical is broken down by sunlight when the sun rises (shown in the yellow box).  Scheme by Elmar Uherek.

NO3 adds also to the double bonds of unsaturated organic compounds and forms peroxy nitrates after addition of O2.  The lifetime of NO3 / N2O5 decreases drastically as concentrations of water vapour increase.  As water vapour levels increase, more of the NO3 is converted to nitric acid (HNO3), in particular on liquid films on surfaces.

All peroxy species resulting from OH and NO3 radicals or ozone reactions undergo rather complicated and numerous further reactions in the atmosphere  leading to, for example, alcohols, aldehydes, nitrates and carboxylic acids. 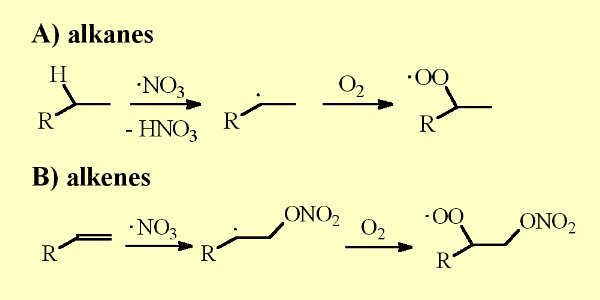 NO3 radicals absorb light in the red part of the visible spectrum. As soon as the sun rises, the nitrate radical is photolysed mainly into NO2 and O atoms and NO3 concentrations fall to zero.  Now hydroxyl radicals (OH) start to be produced and these become the most important oxidant in the atmosphere.

Ozone, the third most important oxidant in the atmosphere, does not react with alkanes but will react with alkenes (unsaturated hydrocarbons with a carbon to carbon double bond) if OH concentrations are low, particularly in the winter or the evening.  We will look at the atmospheric chemistry of ozone later in this unit. 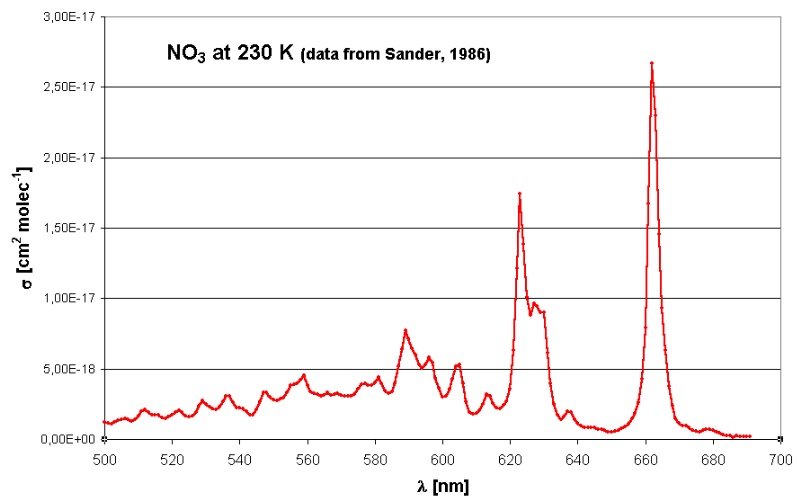