Protecting the atmosphere from air pollution is a priority for many countries and international organisations and contributes to the aim of sustainable development.  Many conventions and treaties have been signed which limit the emissions of harmful substances into the air and encourage the use of new cleaner technologies.

In the 1960's and 1970's, an important change in our social attitude to environmental issues took place. People began to understand that the natural environment has limits and that its resources can't be exploited endlessly. 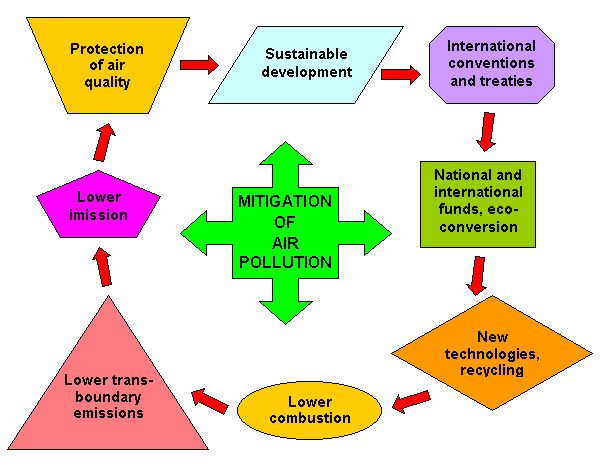 Protecting the atmosphere means limiting or preventing the emissions of harmful substances.  Maximum allowed concentrations of particular substances over different time periods have been defined to try and limit their damage.

Because pollutants are transported by the wind, air pollution problems in a particular location can be the result of emissions from many different sources, often far away.  To obtain information about pollution concentrations, national networks of environmental monitoring have been set up which gather, analyse and publish air quality data. 2. Air pollution monitoring station in a city (Cracow, Poland), belonging to the Inspectorate of Environmental Protection of the Malopolska Voivodship.
Photos: Sebastian Wypych. Many technological innovations have improved air quality.  New combustion systems for heating houses use less fuel (= lower combustion) to produce the same amount of energy.  Power stations use filters and scrubbers to reduce the amount of dust and sulphur containing gases they emit.  Car engines are now more efficient and so use less petrol per kilometer, petrol and diesel contain less sulphur, leaded petrols are no longer made and catalytic convertors reduce the emission of harmful gases in the exhausts.  More thought is given to the location of new factories and recycling allows us to use materials again.

4. During the First Recycling Festival in Cracow, Poland, a copy of the Barbicane was built (The Barbicane is part of the remains of the city defences). The copy, half the size of the original, was made using around 36 thousand aluminium cans, was 7.7 m high and had a diameter of 14 meters.  After the festival, all the cans were taken to the aluminium works.  Photo: Sebastian Wypych. 5. a)  During the 2nd Recycling Festival in Cracow, Poland, a copy of Clothall was built. The copy was made of about 140 thousand bottles. After the festival, all the bottles were taken to the glass works.

Air pollution regulations exist which give the maximum allowed pollutant concentrations in each country.  However, air pollutants are transported by the wind from one country to another and the construction of high chimneys (which protect the immediate vicinity from the effects of the pollutants) enhances this transport process.  Problems associated with these trans-boundary emissions have resulted in international agreements on air pollution, for example the actions started in 1991 by the governments of Germany, Poland and the Czech Republic regarding the "Black Triangle".

An important element of international co-operation are the conventions and treaties.  These have been ratified by many countries and are international legal agreements which protect the atmosphere.  An example is the United Nation Framework Convention on Greenhouse Gases (more about this in the "Climate policy" chapter). The countries belonging to the European Union have a common environmental policy and special funds to implement it.  Some of the money is used to improve air quality in the new member states.  An example of this is PHARE (Poland and Hungary Assistance in Restructuring Economies).

Protecting the atmosphere requires huge amounts of money to cover the costs of introducing new technologies and to organise and conduct environmental monitoring.  Various economic instruments are used to support those actions. One is eco-conversion, where the foreign debts of a country are converted into "ecological" investments. Another tool is emissions trading, although this method is not favoured by everyone.  Here companies are given limits on the amount of pollution they can emit.  If a company emits less pollution than its limit, it can sell the remaining part to another company.

You find more about the "Black Triangle" in:
Climate in cities - Basics - Unit 1 - Areas in danger