Fire chemistry and its global importance

Every year, large areas of our planet burn: 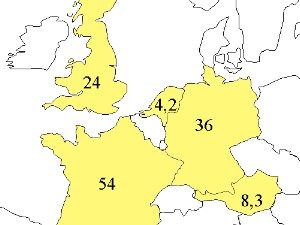 1. Area of European countries in millions of hectares.  The Netherlands, for example, covers an area of 41,500 km2. image: Elmar Uherek.

2. Smoke over Siberia.  Image courtesy of the SeaWiFS Project

Because most of the focus is on the destruction of the rainforests by fire, its easy to forget that large areas of the boreal forests in, for example, Siberia and Canada also burn each year.  These boreal forests cover an area of 920 million hectares, make up 73% of the global coniferous forest area and 29% of the total world forest.  Nowadays, boreal forest fires are not only caused by nature but also by humans.

Emissions from man-made fires are an important source of carbon to the atmosphere.

The uptake of carbon dioxide by the continents is poorly understood but is thought to be primarily the result of increasing plant growth in places other than the typical burning regions. 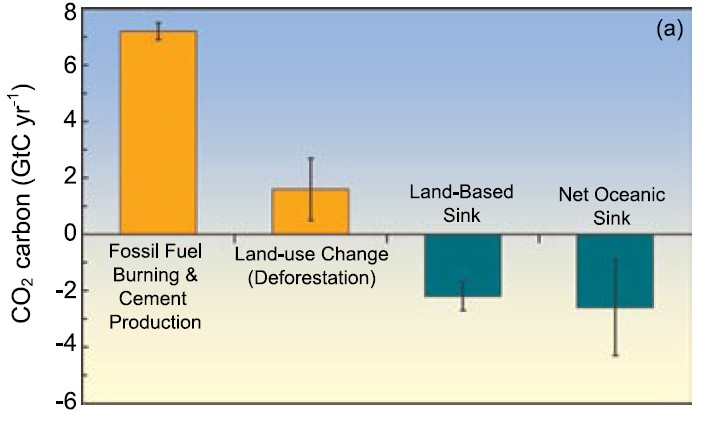 4. a) The amount of CO2 released annually to the atmosphere by forest and vegetation fires or from the conversion of forest area into farm land is not as well known as the emissions from oil, natural gas and coal. Also the sinks have a high uncertainty (indicated by the black error bars). Source: IPCC AR4 2007 FAQ 7.1 fig. 1

Natural vegetation fires can be short term CO2 sources to the atmosphere.  Over the long term, however, natural fires have either very little influence on CO2 levels or may actually represent a very small carbon sink (< 0.1 pG C y-1) since carbon containing sediments are stored in the ground.  Open forest and savannah fires occur in cycles of 1-3 years over much larger areas than rainforest fires and have little influence on the climate system. 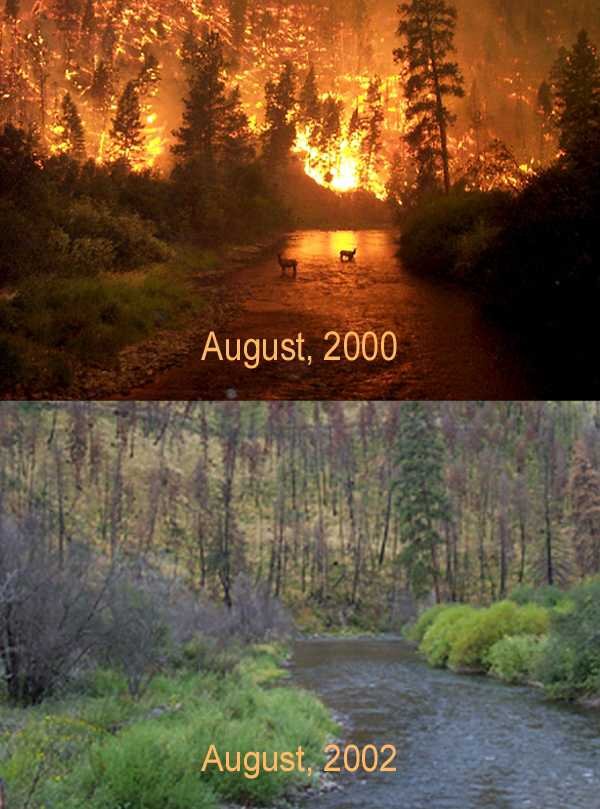 What is formed during the combustion process?

This depends on;
a) what the plants consist of
b) the temperature of the flames
c) how much oxygen is available
d) whether it is an open fire or a smouldering fire

What do plants consist of?

Plants contain up to 60% water although their water content is generally lower than this before the fire season as the vegetation looses a lot of water during drought times.

Plants typically have the following components:
cellulose and hemicellulose [carbohydrates (C6H10O5)n] 50-70%
lignin 15-35%
smaller amounts of: proteins, amino acids, other metabolites
minerals up to 10%

After ignition, oxygen levels are sufficiently high to allow a period of open fire to occur.  As oxygen levels fall, the fire begins to smoulder.  During the period of open fire, a simple mixture of fully oxidised compounds, including CO2, are formed.  Incomplete oxidation occurs during the smouldering fire stage and a complex mixture of compounds are formed which may even include methane (CH4). 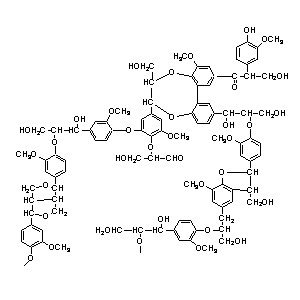 7. Lignin gives the wood its structure.  It is formed when water is irreversibly lost from sugars to form aromatic (ring) containing polymers.

Examples of fires and the types of gases released from them are given in:
Lower Atmosphere - Basics - Unit 2 - Fire
More about fires in the Mediterranean and their impact on climate is explained in:
Food and Climate - Basics - Unit 3 - Drought and Fire