We have already learnt a lot about the gases which exist in our atmosphere.  The greatest number of gases are found in the troposphere, the lowest layer of the atmosphere, but their concentrations vary greatly over both time and location.

How to describe a gas in the atmosphere?

A gas in the atmosphere can be:

Trace gases are gases which make up only a tiny fraction of the air.  Levels of these trace gases can be as low as one molecule in one billion or even one trillion air molecules. 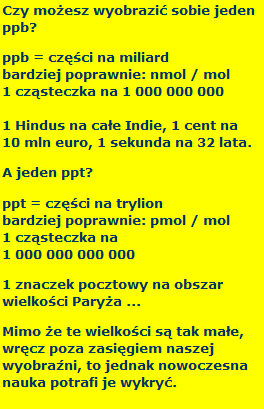 The misunderstanding of mixing ratio 'units' ppm and ppb

In numerous scientific publication the amount of a compound in the air is given in ppm (parts per million) or ppb (parts per billion). We also use this abbreviation here, because it is so common and you find it everywhere. But it can be very misleading.

2) Mixing ratios do not really have a unit, because you can cancel the units. If the mixing ratio is 400 ppm this means you have 400 molecules among 1,000,000 molecules. The more correct expression is 400 µmol/mol.

Depending on the local and temporary conditions in the atmosphere, a gas can be: 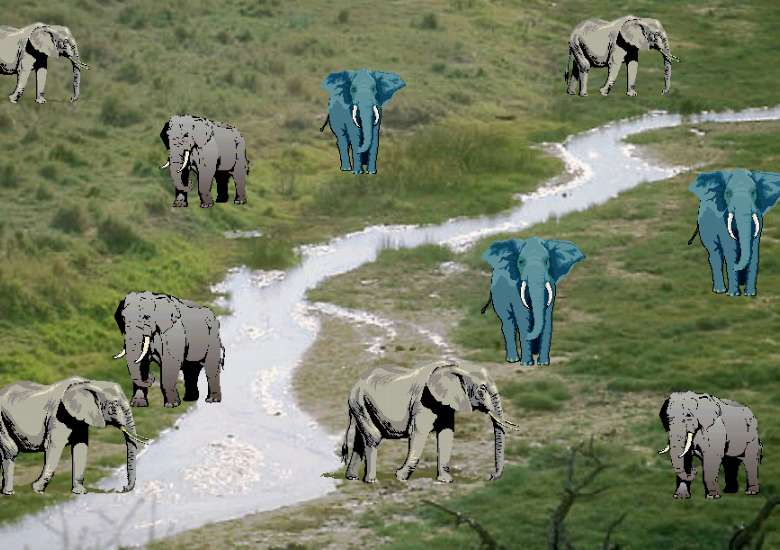 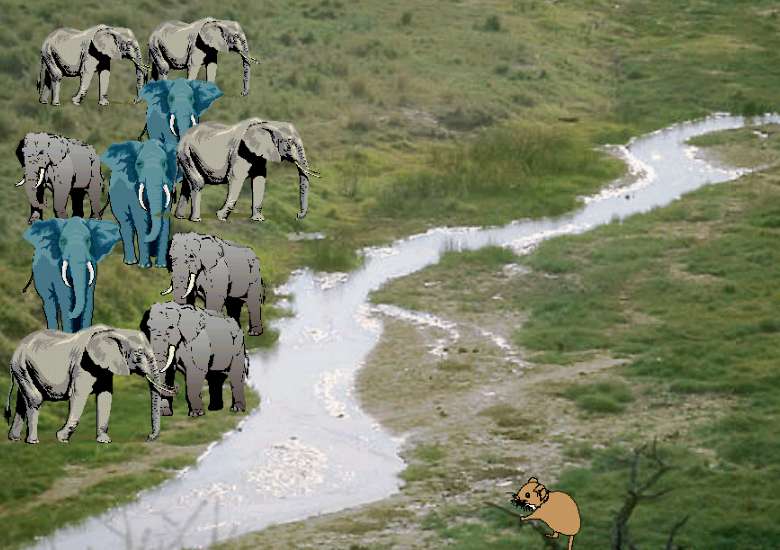 If a gas is homogeneously distributed this means that we find comparable mixing ratios of the gas everywhere around the globe and also at varying altitudes.  This is the case for stable gases with a long life times. These gases are only slowly removed from the atmosphere and are either unreactive or react only very slowly.

Nitrous oxide N2O is a homogeneously distributed gas, similar amounts are seen all over the world and at different heights in the atmosphere. However, concentrations have increased over the past 200 years as a result, primarily, of human activity. 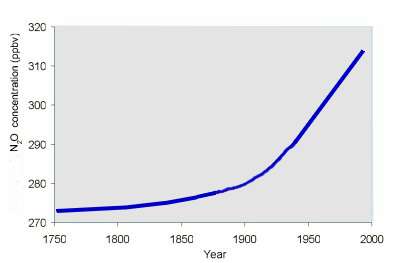 3. The change in N2O levels over time. author Elmar Uherek.

The amounts of some gases depend strongly on the strength of the Sun.  The levels of these gases in the atmosphere shows a daily cycle and sometimes also a seasonal pattern 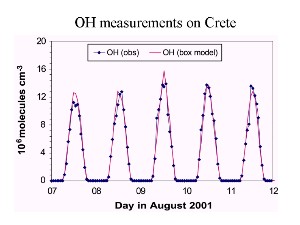 The hydroxyl radical is formed from the breakdown of ozone by sunshine.  So atmospheric OH levels increase as the Sun rises, reaching a maximum after noon and then decrease through the afternoon and are negliable at night (see the unit on oxidation for more information).

Vegetation fires are one source of the gas formaldehyde (HCHO).   Concentrations of formaldehyde, as measured by the satellite based GOME instrument, are high during the fires seasons (March in Southeast-Asia, September in Brazil). 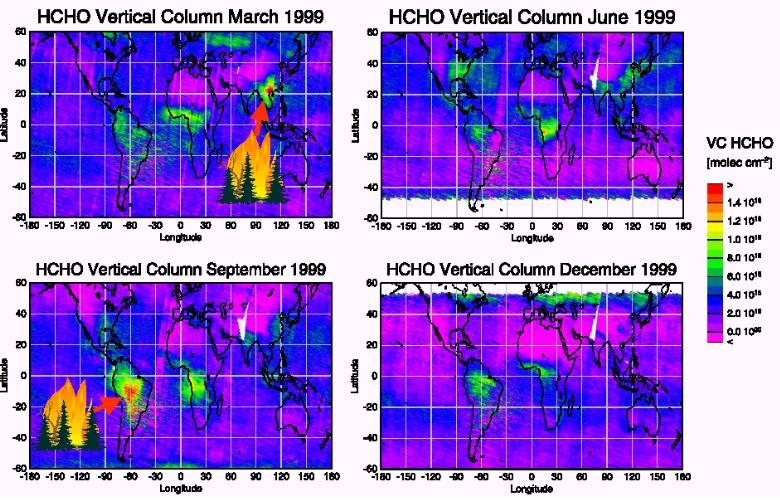 Some gases have increased or decreased in the long term over decades, hundreds, thousands or even millions of years. Since the industrial revolution, some 200 years ago, human activity has increased the average concentrations of many gases in the atmosphere.

The growing season and the impact of humans: for example carbon dioxide (CO2) 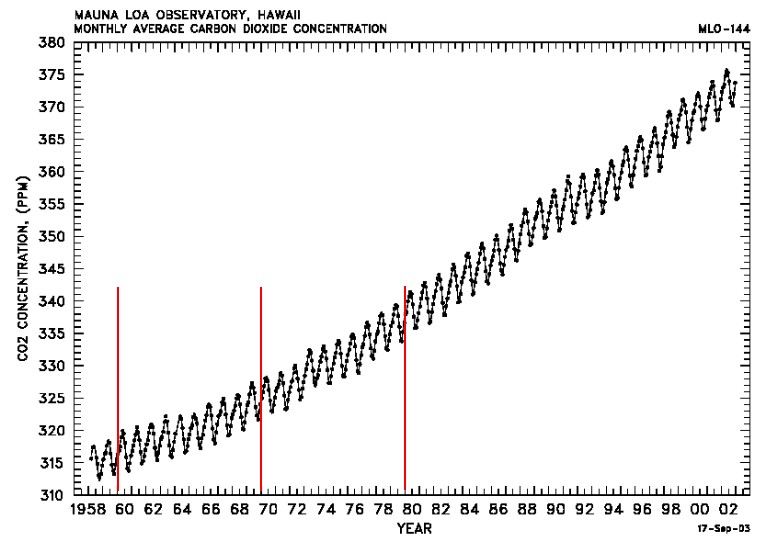 Carbon dioxide levels, therefore, increase first of all in the Northern Hemisphere and then slowly rise in the south.  Transport over the equator takes time since mixing within one hemisphere is much faster than mixing between the hemispheres.   Along with this long time period change in CO2 levels we also see that the annual pattern of CO2 varies.  In winter, the trees and other plants stop growing and, as a result, take up less CO2.  At the same time, we humans heat our houses and emit more CO2.  Consequently we see the highest CO2 concentrations at the end of the heating period in May and about 5 ppm less CO2 after the end of the growing period in October. The two graphs clearly show both patterns. 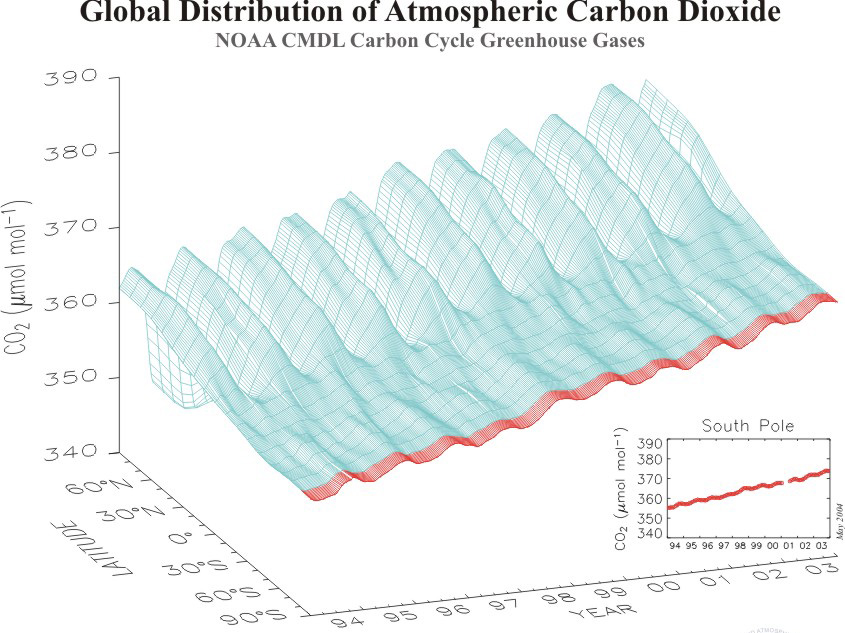