Thunderstorms can consist of just one ordinary cell that transitions through its life cycle and dissipates without additional new cell formation. True single cell storms are, however, relatively rare since even the weakest of storms usually occurs as multicell updraft event. Single cell storms seem quite random (perhaps because of our lack of understanding) in their production of brief severe events such as hail, some heavy rainfall and occasional weak tornadoes. 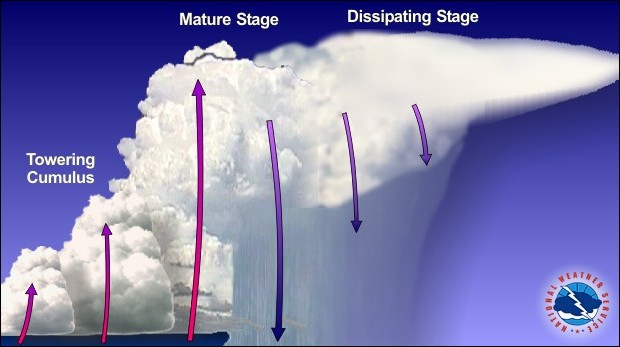 Thunderstorms often form in clusters with a group of cells moving as a single unit, with each cell in a different stage of the thunderstorm life cycle. Generally these storms are more potent than single cell storms, but considerably less so than supercells. 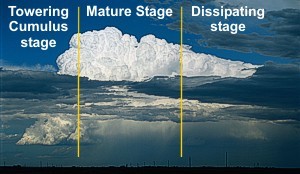 Sometimes thunderstorms will form in a line which can extend laterally for hundreds of miles. These "squall lines" can persist for many hours and produce damaging winds and hail. A squall line is a line of thunderstorms that have a common lifting mechanism. Lifting mechanisms tend to occur in bands. The rain cooled air or "gust front" spreading out from underneath the squall line acts as a mini cold front, continually lifting warm moist air to fuel the storms. Examples of banded lifting mechanisms include fronts, large outflow boundaries, gravity waves, etc. 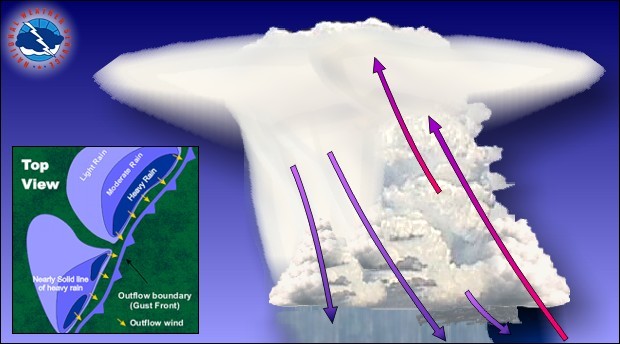 3. a) Schematic of a squall line (top) and accompanying photograph (below).

The classic squall line will develop out ahead of and parallel to a cold front or dry line boundary. The storms first develop where there is the best combination of moist  and ascending airflow. The storms will continue to evolve and new cells will develop (commonly toward the south and east). 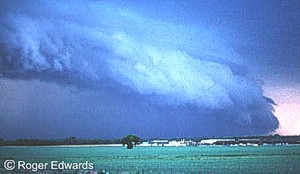 Downburst winds are the main threat, although hail as large as golf balls and gustnadoes can occur. Flash floods occasionally occur when the squall line decelerates or even becomes stationary, with thunderstorms moving parallel to the line and repeatedly across the same area.

Supercell thunderstorms are a special kind of single cell thunderstorm that can persist for many hours. They are responsible for nearly all of the significant tornados produced in the U.S. and for most of the hailstones larger than golf ball size. Supercells are also known to produce extreme winds and flash flooding. 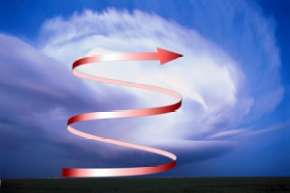 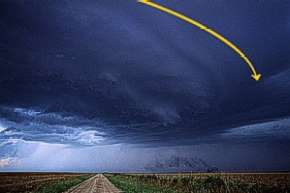 They are characterized by a rotating updraft (usually cyclonic) which results from a storm growing in an environment of significant vertical wind shear. Wind shear occurs when the winds are changing direction and increasing with height.

The most ideal conditions for supercells occurs when the winds are veering or turning clockwise with height. For example, in a veering wind situation the winds may be from the south at the surface and from the west at 15,000 feet. Beneath the supercell, the rotation of the storm is often visible as well.