Energy from the Sun doesn't fall equally all over the Earth. Most of the Sun's energy enters the Earth at the equator. This leads to large temperature gradients between the equator and the Poles. Movement of both the air and the oceans is controlled by these temperature differences and the result is a transfer of heat from the equator to the poles. About half the heat transport around the planet is by the oceans so the oceans are an extremely important part of the Earth's climate control system. If ocean circulation is changed by global warming, major changes in climate are therefore likely. Ocean circulation also transports oxygen from the air into the ocean making marine life possible.

Seawater continuously moves around the globe as if it is on a huge conveyor belt, moving from the surface to the deep waters and back. Because the distance the water has to travel is so large, it takes about 1000 years for seawater to go all the way around the Earth.

The movement of water around the oceans has two parts which are strongly linked:

1. Schematic view of the ocean circulation (Kuhlbrodt et al., 2007).
The red coloured bands show the main currents at the surface, the blue coloured parts the main currents in the deeper layers. Violett is Antarctiv bottom water. Deep water formation is taking place at the yellow spots in the Northern Atlantic (Labrador Sea and Nordic Seas) and near Antarctica due to sea ice production.

In the Northern Hemisphere

Ocean circulation transports surface seawater to the polar region where it cools. This cooling releases heat which warms the air and makes the water cold and, therefore, dense enough to sink to the bottom of the ocean. This results in the formation of new deep water which displaces existing deep water pushing it towards the equator. The major regions for this deep water formation are the Labrador and Greenland Seas in the northern North Atlantic Ocean. This North Atlantic Deep Water then flows south along the ocean floor allowing more warm surface water to flow into the region to replace it. Strong cooling also occurs in the Bering Sea in the North Pacific, but the structure of the ocean floor here prevents the deep water that forms from entering the ocean circulation.

Deep water formation also occurs around Antarctica during the production of sea ice. This ice contains very little salt and so, as the ice forms, the surrounding water becomes saltier and more dense. This very dense water slides down the edge of the Antarctic continent to form Antarctic Bottom Water. This water then spreads out and moves around most of the ocean floor.

For some time we thought that the deep waters that formed at the poles moved towards the equator, slowly warming and rising to the surface over the whole ocean, and that this water then returned to the poles in warm surface currents to complete the cycle. However, recent studies have shown that this gradual upwelling process is too slow to explain the age of seawater. 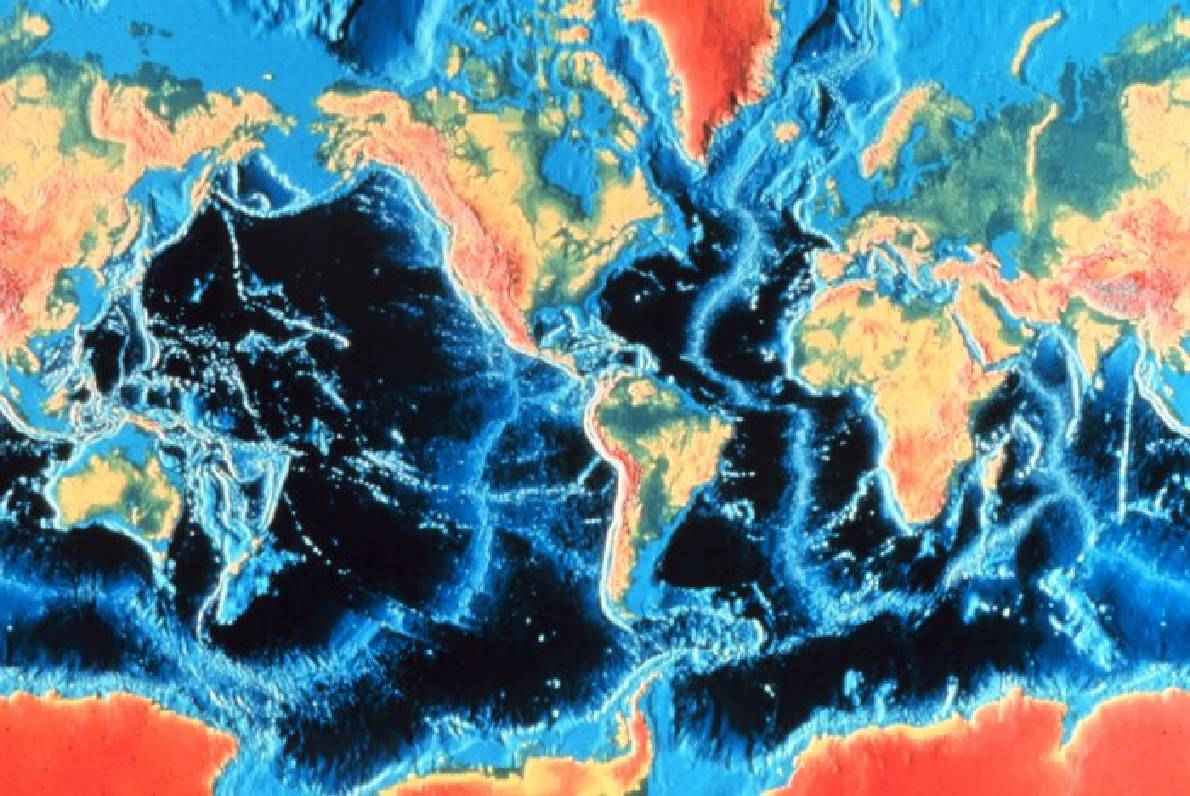 2. This NOAA map shows the different elevations of the Earth's surface. Pale colours on the ocean floor are the mountainous areas. Mixing of water over these areas forces the deep water to rise to the surface.

The Gulf Stream is one of the most important wind driven currents. It transports very warm tropical water from the Caribbean Sea and the Gulf of Mexico across the North Atlantic to northern Europe. The warmth of the water heats the air above and the movement of this warm air is a very important way by which heat is transported northwards. As a result of this heat transport, northern Europe is very much warmer than corresponding latitudes in North America and countries around the Pacific Ocean.

For example, the yearly average temperature at Iqaluit (64oN, 068oW) in the Northwest Territories of Canada is -9.1 oC. This compares with an average for Trondheim (63oN, 010oE) in Norway of +4.8 oC. Long term records suggest that, as a result of the Gulf Stream, average temperatures in Northern Europe are 9 oC higher than the average temperatures for the same latitude elsewhere.

The Gulf Stream is an example of a western boundary current, a current which flows along the western side of a major ocean basin. The corresponding current in the Pacific Ocean is the Kuroshio Current, and in the Indian Ocean, the Aghulas Current. They result from an interaction between the shape of the ocean basin, the general direction of the wind and the rotation of the earth. They all have a high velocity (the Gulf Stream has an average velocity of 1 m s-1, thats 3.6 km h-1) they are all quite narrow (between 100 and 200 km wide) and all have a very important influence on the climate of the region. Eastern boundary currents also occur; these transport cold surface waters from the poles to the equator. They tend to be weaker than their western counterparts.

3. This image clearly shows the warm waters of the Gulf Stream (in red) travelling across the North Atlantic. You can just about see the coastline of North America in the left hand corner. It was taken by MODIS (the Moderate Resolution Imaging Spectroradiometer) aboard the NASA Terra and Aqua satellites.