One of the most important trace gases emitted from the oceans to the atmosphere is dimethyl sulphide (DMS). This is the one of the chemical compounds which gives the sea its characteristic smell.

DMS is produced by the breakdown of a chemical called dimethyl sulphoniopropionate (DMSP for short!!) which is found in the cells of many species of phytoplankton. We thought that phytoplankton produced DMSP to help them to survive the salty conditions in the oceans but it now looks as though they may also use DMSP to get rid of harmful waste products, to allow them to live in very cold waters and perhaps even to prevent other animals eating them. Not all phytoplankton produce DMSP and we are not sure at the moment why only certain species do. One type of phytoplankton, the coccolithophores, are important DMSP producers. They have calcium carbonate skeletons. 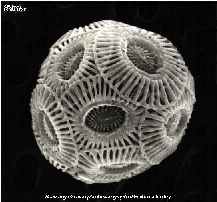 This image shows a very important coccolithophore, Emiliania Huxleyi. This single celled marine phytoplankton surrounds itself with over 30 plates (or coccoliths) made up of calcium carbonate. Each coccolith is just 0.003 mm in diameter.

When phytoplankton are infected, die or are eaten, DMSP is released into seawater where it breaks down to form DMS. Much of the DMS stays in seawater and is consumed by bacteria or converted to other chemical species. A proportion, however, escapes and enters the atmosphere.

As DMS is the breakdown product of a biologically produced chemical compound, DMS emissions occur in the spring, summer and autumn when phytoplankton are growing. Emissions come from both coastal waters and from the open ocean but are larger in regions where particular phytoplankton grow. Lots of DMS is emitted from the north east Atlantic Ocean and from the Bering Sea in the North Pacific Ocean as there are regular blooms of coccolithophores in these areas. Lots of DMS also enters the atmosphere from coastal waters around Europe.

2. The calcium carbonate plates of the coccolithophore Emiliania Huxleyi mean that blooms (large numbers of the organism) are visible in seawater and can be seen by satellites in space. The greeny-turquoise colour is a coccolithophore bloom in the Bering Sea seen from the NASA SeaWiFS Satellite.

About the same amount of sulphur is emitted from natural sources as is produced during the burning of fossil fuels by humans. So the tiny phytoplankton you can see in the image above is as important to our climate as the huge power stations that we use to generate our energy. In regions far away from human activity, most of the sulphur present in the atmosphere comes originally from DMS emitted from seawater. It is thought that between 20 and 50 million tonnes of sulphur enters the atmosphere from the oceans each year.